Last weekend we purchased a new pop-up tent camper. It's a 1980 Coleman model which had a broken lift that I had to repair this past week. (It was really just 20 feet of 1/8" wire, but it took so many different tools, almost all of which I already owned!) This past Saturday night we took the trailer to Dash Point State Park, near Federal Way, located about 20 miles south of Seattle. This was intended as a test trip, to see how waterproof the old canvas is (the body itself is in great shape, but the canvas is showing its age). The thinking was that if it was absolutely miserable we'd be able to pack up in the middle of the night and come home in under an hour. Well, it turns out there are a few tiny leaks which need to be plugged, but it makes a wonderful home away from home. It packs down and tows very nicely, but expands to have two double beds and a table and is quite roomy. An added bonus is that with the electricity hookup at the camp ground, we were able to get a space heater to keep the temperature almost near 60 while it was freezing outside.

Sarah has the photos at her Smugmug site.
Posted by Michal at 11:48 PM No comments: Four years ago, the governor's race in Washington was very close with two recounts and a court challenge (Christine Gregoire won by 130 votes in the end). I had volunteered for the recount, so once it was all said and done, I was informed about the Governor's Inaugural Ball, and took Sarah. We had a blast, so we went again this year. Although we weren't able to snag the governor (she ran down the stairs way too quickly for us to keep up with her!), we did get a very nice photograph with Sam Reed, the Secretary of State. (See more photographs). A variety of Washington wines accompanied the hors d'oeuvres, made by a variety of cooking schools. I even ate geo-duck! The only downside is that the ball takes place on a weeknight in Olympia. That means we have to get off work, get ready, then drive for an hour before we get there. We'll be sure to be there again in four years, however, as it's worth all the effort.
Posted by Michal at 11:19 AM No comments:

Sunday evening the first snow of 2009 came down in Seattle. It didn't last very long, melting over the course of the day on Monday. I took a photo every 30 seconds and made a 2 minute video: 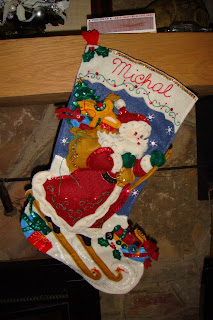 We've managed to post all of our holiday photos now. I escaped the worst of the Seattle snow, leaving on Thursday, Dec. 18th for Atlanta. Michal, too, missed the airport weather madness and arrived safely in Atlanta on Dec. 24th. We tore through two days of presents, then, thanks to snow delays with packages, came home to another week of presents arriving.

Michal also got some great shots of our shinty game in the snow from New Year's Day.