In keeping with our new-found Tacoma tradition, we went to the Pt. Defiance Zoo's Zoo Lights on December 22nd. We arrived just after it opened at 5pm, having driven through a progressively heavier and heavier rainstorm which ended merely moments before we arrived. The optimist in me prevailed, however, and it didn't rain again until we were leaving. Curiously, the crowds got more and more crowded as the night went on.

When we told Theo we were going to a zoo, his first reaction was "animals!". Then "eat!". He wanted to see the animals eat, and really, he wanted to feed them. (He did also say "lights", as he'd seen Christmas light displays before.) He was not disappointed.

Theo also had a great time watching the tiger cubs play with each other ("bite!") and, on the way back out to the car, riding on the carousel. (The linked photo is one of the rare times we can get him to smile on a carousel -- usually he has what we call his "carousel face" on, which is this serious demeanor which we've learned means he's having a really wonderful time, and will want to ride again -- which of course we did.) Vivian also had a great time on the carousel, and we particularly liked the "you don't pay if you're standing" policy.

Stay tuned for some more updates about Christmas activities!
Posted by Michal at 8:53 PM No comments: On Christmas Eve Day (that's Dec 24th) we took Theo and Vivian (but really, Theo) to see the Model Train Festival at the Washington State History Museum in Tacoma. It was well worth the drive. I don't really know what they normally have, but they had every open area crammed with a different modelling club displaying their model train layout. All sizes from N-scale to actual ride-able trains (very appropriately sized for a toddler) were represented. My favorites were the N-scale layouts, since you could fit a lot more tracks and details in the same amount of space. The larger models ended up being essentially just three tracks side-by-side without the detailed towns that N-scale allowed. If you're in the area, the exhibit runs through New Year's, and I highly recommend it, even without kids.
Posted by Michal at 10:42 PM No comments: 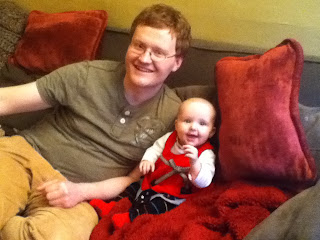 Happy holidays from all our little elves!
Posted by Sarah at 9:26 AM No comments: 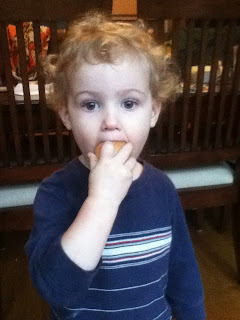 This is Theo eating an onion like an apple.
Posted by Sarah at 10:40 AM No comments:

We weighed Vivian on an unofficial basis (but an accurate scale, unlike the ones at home) on Thursday evening. In just shy of two weeks, she's hit 15 lbs, which is an increase of 1 lb and 3.5 oz. Yes, that's great news. Yes, it's taken me this long to post the update. Yes, that's actually a very impressive turn around time these days. I'm also in the process of uploading my 2000 photo backlog. You might think I'm kidding, but I'm not. You will see the posts for and to those sooner (or more likely later).

In the meantime, I have all six months of Vivian's giraffe photos uploaded, which means I'm current on that at least and can share them with you. Check them out here to see how she has (or in some cases, hasn't) grown. Michal also has his (much better) photos of them same thing uploaded. You might have seen the most recent of those (five months) on an earlier blog post.

In the meantime, Vivian is on the three meals of solids a day and nurse as often as she wants program. Her solids include (in roughly the order they were introduced) avocado, bananas, oatmeal, sweet potato, yogurt, apples, and pears. She's due for mangoes as soon as I can get them pureed. So far, she's a banana girl. If it has bananas in it, she'll eat it. So she gets banana yogurt, banana oatmeal, banana avocado, and just plain bananas a lot. She's also onboard with the sweet potatoes, but the pears, which I thought she would love, she was not totally sold on. For Vivian, that means she definitely noticed the new food, but was willing to eat it in that way where you had to entertain her to get her to open her mouth to insert food. In all other items she's pretty ambivalent, especially without the banana additive. Lucky for us, banana is just about the easiest thing to add to anything as all we have to do is keep bananas on hand and mush them with a fork into whatever we want her to eat.

Grow, Vivian, grow! Your next check-up is less than a month away. This year's Orange Party was the Orange Shindig, and was a casual afternoon affair. Check out the photos.
Posted by Michal at 12:47 PM No comments: Sarah previously posted about Vivian at five months, but I just got around to uploading the photos I took.
Posted by Michal at 2:37 PM No comments: 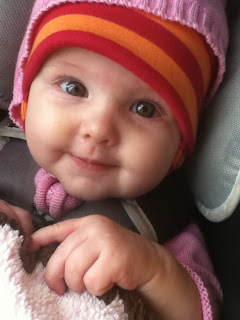 We celebrated Vivian's six month birthday on Thursday by flying home. Both kids were superstars for the trip, and Vivian particularly enjoyed the extended mama lap time.

Vivian had her six month appointment on Friday. She hasn't grown a smidge. In fact, she's lost half an ounce and now weighs 13 lb 12.5 oz. She measured 26.5 inches in height which is a half inch longer even though she has completely outgrown her six month footie pajamas in the last few weeks. Her head circumference is 43 centimeters and is the only measurement tracking in the percentile scales.

The solution: feed her more. Of everything. She started solid foods with avocado at five and a half months. But she got constipated, and that combined with parental laziness (and travel) means she was only eating solids once a day every other day or so. Now she gets three meals a day. Her diet includes banana and as of yesterday, homemade oatmeal cereal. We plan to add yogurt and sweet potato next week.

She is also allowed to nurse as often as she likes. That's nothing new except at night. She has probably been waking more frequently to eat and now if she even peeps she will be getting fed. We are also supplementing her twice a day with our frozen supplies.

Despite the lack of growth, Vivian is still our extremely happy girl. She definitely has a mama preference but is otherwise extremely sociable and friendly. What's more, she isn't bothered at all by commotion regardless of the source. Five kids under five at Thanksgiving dinner? (Four year old, two year old, 19 month old, five month old, and four month old - it was chaotic!) Vivian is the only one who wasn't crying at some point. She sat and watched everyone eat and talk and made no complaints.

Vivian rolls both ways now, but not more than one roll at a time, and sometimes she still complains about being horizontal. She prefers to be upright, and standing is best. She likes to be where the action is and hates gong into any room used for sleeping. She does not like getting dressed, particularly the head and arms portions. And unlike her older brother, she can not stand bath time.

She loves to laugh and smiles frequently. She hates the car, possibly because she can't see anyone else. But even having an adult in the back doesn't always solve the problem. She reaches for things, will sneak a bite of anything she can sink her teeth into before you even know she has a hold on something, and transfers things easily from hand to hand.

She can sit unassisted now although I would never leave her in that position. She's just as likely to lunge for something as to lose her balance and she is strong. She can chuck a toy across the room and launch herself towards things remarkably well.

She continues to delight everyone with her conversations. She has added a few consonants, mostly m. She may or may not be signing but routinely makes the sign for milk every time she is nursing and not noticeably any other time.

Vivian loves to go out and about and discovered the joy of swinging at her grandparents' house. (The swing set and slide were built especially for our visit.) She also loved swinging in the hammock.

Vivian's true obsession right now is tags. Any kind of tag. A removable after purchase one, a permanent one, plastic, paper - she is not picky about the particulars.

She also loves her brother and his curls, thoroughly desires his milk sippy cup and his lovie, and thinks Tetley is the height of hilarity.

We will continue to stuff her full of food and look forward to where the next months take us!
Posted by Sarah at 10:04 PM No comments:

As part of Theo's second birthday celebrations, we inquired with our friend Bill if he could get us a tour of the Kenmore Air planes based at Boeing Field. He came through, much to Theo's delight. Theo wanted all of us to get on board, buckled his seat belt, and started saying "Go!". It didn't take long for us to realize he wanted to go for a flight. See all the photos.
Posted by Michal at 2:17 PM No comments: