Since the previous family hike to Denny Creek went so well, I figured I would try something a little more complex: a 5-mile round trip to some lakes. This time it was only Theo and myself.

Theo really enjoyed hiking with Tetley and over assorted bridges, of which there were many.


Our first view of Talapus Lake: 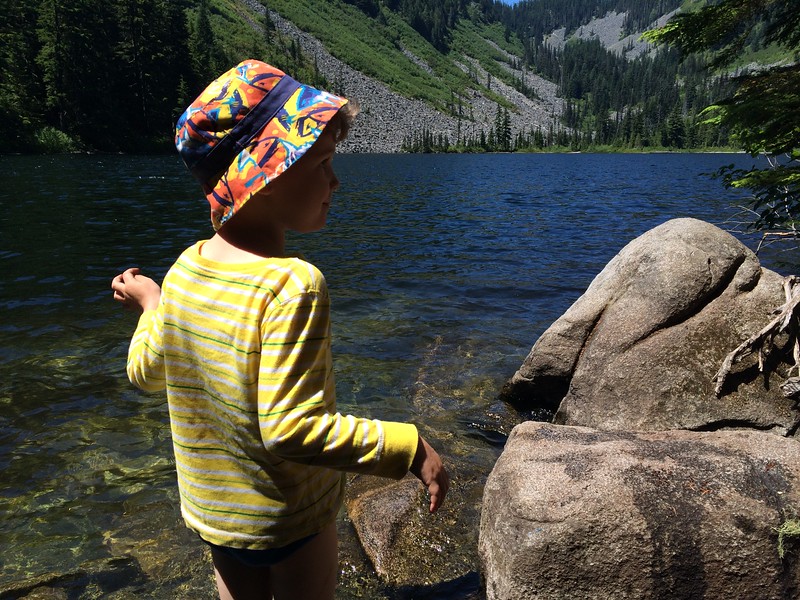 Things went swimmingly (pun intended) so we hiked another half hour up to Ollallie Lake:


The hike down started off great -- Theo was singing a song and basically ran half the way back, but then the tiredness shone through as he started stumbling more and more. Eventually we made it back to the car without needing anyone to carry anyone else, but both Theo and Tetley immediately crashed:

Check out all the photos from the hike.
Posted by Michal at 4:14 PM No comments: 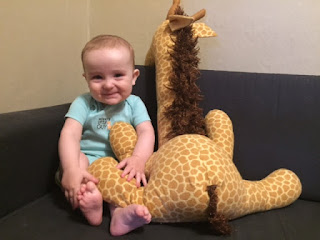 Xavier is nine months old and boy has he had an exciting week to mark three quarters of a year! He's officially been outside the womb now as long as he was inside it.

We had our nine month check up which I will get to shortly. Tuesday night around 10:35 he had a sudden terrible cough. He sounded so bad we debated taking him to the ER. I decided if he could sleep that was probably better than keeping him up all night at the hospital. He did fine while I held him upright but every time I laid him down he had this awful hacking cough, almost like a barking noise and he couldn't seem to breathe. So he slept on me off and on for three hours until he finally turned himself horizontal in my arms and I managed to get him back into the crib without a massive coughing fit awakening him again.

Strangely he didn't have any cough during the day after. His regular appointment was the following day and he seed so happy and peppy we didn't go to the doctor unscheduled.

At his regular visit, he was diagnosed with croup. Since it's a virus there's not much you can do besides wait it out. Luckily we are past the worst of the scary cough.

Unluckily, Xavier had gained only two ounces since his last weight check at seven and a half months. He weighed 19 lb 11 oz., aka the 36th and 51st percentiles.

He hasn't grown a smidge in height so they came back and measured him again, at which point they decided he was 29.75 inches, up from 29 inches. That moved him to the 90th and 94th percentiles for CDC and WHO for height.

His head circumference is dandy at 18.90 inches (40 some centimeters) which basically puts him off the charts or at the very least "greater than 97th" percentiles.

He is not sitting up unassisted. I would never dream of leaving him sitting anywhere, even the floor. He just flips over to one side or the other, or back. He just doesn't seem to be interested in sitting up. I've seen him do it once about a week before he turned nine months and I was amazed.

He is getting around much faster now. He finally figured out how to drag himself forward via the brute force method at eight and a half months. I believe the move is also called an army crawl. He doesn't get his belly off the floor at all. In fact his belly is generally the part of him most in contact with the floor. He hauls himself around using his elbows and forearms. And boy! In two weeks that boy can move! He can get all the way around the "loop" through the dining room and hall now in under five minutes. He can get to basically anything on the floor he is interested in.

And he's interested in everything. He is filthy after five minutes of scrubbing my floors with his stomach. So we are flying through onesies, which he is currently also wearing as pajamas in our heat streak. The weather is awesome but it is not cool.

He loves anything he can get his hands on. Legos, train tracks, and magnet tiles which are almost always on the floor are top contenders. He will empty the ball basket too and can pull the Lego boxes off the lower portion of the coffee table and distribute those.

He does not mind spending time in the exersaucer and loves the Johnny jump up. Pretty much the only thing that upsets him is Mama walking by or in sight and not picking him up. If he is not contained he will come to me now.

He shows excitement by kicking his feet in the air when he is on his belly on the floor. He can also sit on toys like the rocking horse in the backyard (which has a high back and low seat so it's particularly good for him), the rocket (ship not the cat), and the digger.

He's sleeping terribly. It's been so bad at night that I no longer even nurse him in the bedroom during the day. He wakes up at 11 something every night despite the fact that I haven't fed him at that time for weeks. He cries and goes back to sleep on his own ten to twenty minutes later. Every night. That first stretch from 7-11 is by far the longest stretch of the night and sadly it hardly overlaps with my night at all. After that, he's awake every hour and a half to three hours though three hours is a very good stretch. I nurse him around 1 or 2, and again sometime between 4 and 5. He's been up for the day as early as 5:45 am and as late as 7.

Part of this sleep issue is inconsistency during the school year as I regularly had to drop Theo off right around nap time. Now that I can be more consistent with naps and bedtime I am hoping overnight sleep improves.

Xavier takes two naps a day. The first starts between 9:30 and 10. A regular nap is an hour and ten minutes. A crappy one is 25-35 minutes. If he's had enough sleep, he wakes up quiet and it can be a while before I think to check if he's awake.

In the afternoons he likes to nap at 2, but twice a week I am picking up his sister from school then. He can make it until 2:30 and it isn't like he complains. He sleeps another hour and ten to fifteen minutes in the afternoon though over two hours happens about once a week.

Bedtime is around 7 pm if I manage to stay vaguely on schedule. He sleeps with two small blankets and really loves the pale green one with all the silky tags around the edges. He fiddles it whenever he is awake and nursing or taking the bottle.

We are supplementing him with pumped milk once to twice a day. It was twice a day, about 2-3 ounces each time, but my frozen supply is dwindling so I've slowed down the consumption to once per day at the last feeding before bed.

Xavier loves to eat. He gets yogurt with fruit I the morning and that's by far his smallest meal. For lunch he had Frits and veggies and eats about eight ounces of baby food and whatever finger foods he can get his hands on. At dinner he regularly puts away 16 or more ounces of baby cereal. Any kind seems to work - oatmeal, rice, multi grain. He also has some sort of finger food with that meal. It's generally either a veggie like peas or beans or something from our regular meal (pasta etc).

In an effort to improve sleep, and in case acid reflux was causing the sleep disturbances, I took him off rice a couple weeks back. He seemed to improve, going from waking five or six times a night to three to four so I haven't put it back in his diet yet.

With his weight down the doctor suggested more protein. So the next day I put some peanut butter on a waffle for lunch finger food. That was clearly a mistake though doing it at lunch, in hindsight, was brilliant. Doing it at the park? Horrid idea. He started itching his neck constantly. He had a rash about ten days earlier under his neck of undetermined cause so that didn't immediately concern me. Then I noticed the hives popping up on his neck. Then on his face. Then his eyes. He's clawing at his neck and face constantly at this point even though he had two pinkie fingernail sized bites of waffle with peanut butter. He's had waffle before, too. It was very ugly and super scary. We drove home and he had some Benadryl but I took him back to the doctor anyway. We have an appointment with a pediatric allergist now as well as a suspected peanut allergy.

Other new foods we have tried in the past month with no problem include broccoli, green beans, watermelon, cheese, and eggs.
Posted by Sarah at 9:52 AM No comments:

Way back on June 20th we went on a family hike to the Denny Creek Waterslide. It's just an area of the Denny Creek Trail where the creek flows over very large smooth expanses of rock, and you can sit and slide on them. The water is all snow melt so it's incredibly cold, but that didn't stop Theo and Vivian from getting in. According to the GPS the hike was 5.8 miles but that counts all the running around in the creek we did; the guide book says it's only one mile from the trailhead (so a 2 mile round trip -- but it sure felt at least a bit longer). Here's the GPS track: See all the photos.
Posted by Michal at 9:36 AM No comments: