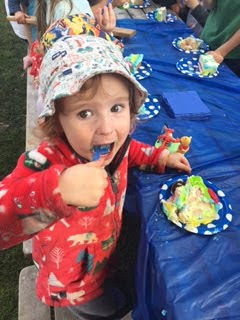 Xavier had a his third birthday, and boy was it a doozie! We celebrated on Saturday with a big party at a local park and playground where they have live animals, including chickens, and an actual red truck to play in.

Since we won the party at a silent auction, we had no limit on the number of attendees. So we got to invite Xavier's entire class and all of our friends and both the older kids' friends.

We had a blast! We lucked into beautiful weather (though we had indoor space just in case) and got to play in the water feature there to boot. Xavier ordered a "Mis" cake, which is his name (it's Polish) for Pooh Bear, with balls. The bakery neglected to add any balls so they stuck a few football rings in at pick up. Xavier did not seem to mind. He's such a sweet, easy going boy most of the time, and the cake had plenty of blue icing. His favorite color is blue, and he will wear his bright blue fleece pants over any other. Sadly, I had to retire them (they were size 18 months!) after the end of summer when capri length pants seemed less of a good idea.

We went crazy and had the party catered by a local Mexican restaurant since Xavier loves quesadillas and beans. We had the usual few last minute cancellations but had only orders food for adults plus a tray of (extremely popular) mini burritos. We ended up with TONS of food. We managed to send several meals' worth home with four different families and still had a fridge full.

Xavier loved opening presents from his friends. One parent even drew him a custom card with some of his favorite things - a fire engine with a chicken tossing different kinds of balls!

Xavier loves any kind of sports ball. Or any ball really. Tennis, soccer, baseball, football, basketball, golf, ping pong. You name it and he loves it. He can smack the baseball off his plastic tee pretty far now, though he still often hits the tee too. That's probably for the best as otherwise the balls would be going in neighbors' yards or down the alley each time.

Xavier got to pick the movie that night for family movie night. He choose the ever popular Chicken Run, which we've watched several times.

The next day we woke up to the usual birthday balloons and present pile. Xavier had no idea what was happening but the other two sure knew. As far as Xavier was concerned, his birthday fun had concluded the previous day. Little did he know the fun was just beginning.

He opened all his presents to great acclaim, with several "this was just what I wanted!" remarks. He got a scented donut pillow that he still sleeps with every night, a night light with three removable balls that can change color (they stay blue one hundred percent of the time), a blue bike helmet, four new super wing transforming toys, a farm train set, a garbage truck matchbox car launcher (from Theo), three plastic chickens and Popsicle stick house built by Vivian, a set of pets and houses and food (also from Vivian), a flat bed trailer with a roller and skid steer, a record player, a new fire engine that lights up and makes noise, a Shine book, a poke a dot book, a reusable sticker transportation activity book, and a Star Wars speeder. I've probably forgotten a thing or two, but it was a very good birthday. He slept with many of the things he loved so much.

For his birthday dinner, he selected the ever popular conveyor belt sushi restaurant. We took him to the fanciest location complete with a train that delivers orders. He likes the blue plates best. (Plates are color coded to indicate price.) His favorite, besides the edamame, edamame paste and chips, fresh fruit, and potato katsu, is the salmon on rice. He even eats the salmon from it dipped in soy sauce on occasion. He definitely ate his fill and then some.

I know because he got to pick a birthday treat afterwards. He went with ice cream, and barely managed to put a dent in his huge cone.

We came home exhausted and worn out. The bigger kids had a cross country event that day they attended during Xavier's nap. He still naps most days, though he can power through in a pinch and remain fairly pleasant. He heads to bed by 7:15 most nights, and gets up with his brother no later than 7. He's often awake earlier and has surprised me a couple time by being the first one awake. He's very good at staying quiet and not waking anyone else up.

Instead he hauls his favorite Taggie lovie, his super plush personalized blue blanket, and his donut pillow into bed with me. At just shy of 35 pounds, I'm having trouble lifting him up.

For nap, he's going to sleep around 1:15 and getting up by 2:30 on a non school day. Since Xavier attends school on Tuesday and Thursday each week from 9-2, he naps later on those days. Other days he has to be awake in time to pick up his siblings at three, though he could last longer if he was subject to others' schedules.

He loves school! He started two days over the summer right around June. Now that he's in a class with the same kids each day, he's really coming out of his shell. He knows his friends by name and requests play dates. When I go to pick him up after five hours, he comes running to give me the best hug. But then he asks for more time to play. He often accuses me for picking him up because he didn't get to play in the garden, which is obviously one of his favorite places, though I have zero control over his school activities.

He crashes hard after a busy day at school. He hates going in the morning and has a mini meltdown each time but trots off without any actual physical demonstrations.

He loves this supper soft and fluffy red fleece patterned with skis and other winter themed things. I lucked into it on sale last year in March on a ski trip at the Hatley store and snatched it up in a size 3T. He wears it every day it isn't filthy. We used to roll the sleeves up a bit but that's no longer required.

He's solidly in 3T clothes. His head is often the issue with shirts. He can still wear some 2T pants depending on the brand and type, but much like his brother, prefers only "soft" fleece pants. He sleeps in his sister's hand me down polka dot pink nightgown almost every night. We're still propping up the mattress on one side to help with his sleep apnea. He has a contoured pillow, too, that I wouldn't dream of sleeping without. He sleeps in such s big pile of stuff in his converted toddler bed it is often difficult to spot him. Chika has taken to sneaking into bed with him as well, and they both love it. I usually remove her very much against her will before I retire for the night.

Xavier's favorite foods are quesadilla, Mac and cheese, and pizza. He loves juice and chocolate milk and pretty much anything food related. He often makes off with my kitchen implements, like tongs, measuring spoons, and funnels. He prefers to keep them in his own kitchen. He loves to "help" cook and it isn't a good idea to get between him and food.

He loves the super wings airplanes and anything else that transforms fascinates him. He's still obsessed with all vehicles, including but not limited to car transporters, trains, fire engines, garbage trucks, and construction vehicles. He will play by himself a home quite happily for hours on end with a constant chatter of running commentary.

He can climb with the best of them and at age three, has finally been allowed on the ladders to his siblings' loft beds. He's delighted with himself though he's had the skills for quite some time. He thinks he can do anything his bigger brother and sister can do, and most of the time, he's right. He loves to imitate people and he speaks in fully thought out sentences. When he gets super excited, he can't get the words out fast enough. It's extremely adorable. He made up a movie name the other week a joy chickens called Bockarella. He's extremely imaginative and clever and remembers and can apply information. He asks questions like "where does rain come from?" usually when I'm driving or otherwise distracted. His main form of complaint is shrieking, almost always due to sibling interaction. He loves watching his kindle though he rarely get much opportunity.

He measured 34.8 pounds at his most recent checkup and is 39.? inches tall. They don't bother to measure head circumference anymore, but I know it's big because of how often it gets stuck in shirts.

Xavier is a pure delight to spend time with and around and we are thrilled to watch him grow.
Posted by Sarah at 11:47 AM No comments: