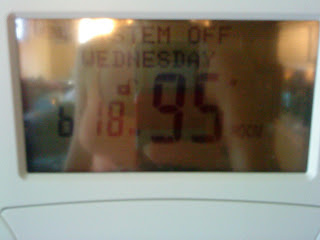 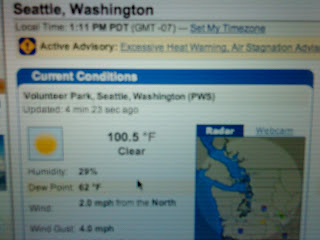 Also known as Monday, yesterday, and today.
You can probably figure this out for yourselves, but Seattle doesn't do hot. In the seven summers I've been living here, the city has averaged two days a year over 90 degrees. And when I say over, I mean it makes it to 91 or 92 briefly. We rarely see two ninety degree days back to back, and never three digit temperatures, which is why no one has air conditioning.
We've moved into the basement to try and outlast the heat wave. Today I resorted to covering the front window with cardboard, which may do nothing but make me feel better. One fan has already bit the dust from constant use.
Posted by Sarah at 1:21 PM No comments: 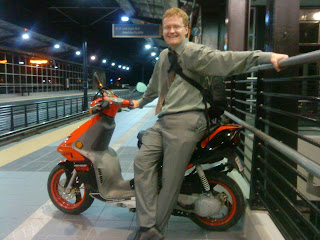 You can tell it was a good wedding because we're waiting at the light rail station to go one stop home after the festivities, despite the fact that we are now the proud owners of the pictures scooter. We only eliminated part of the walk with this strategy, but luckily it was the entire uphill portion.
Oh, and it was hot on Saturday (high 80's?) so the scooter was an awesome ride to both the ceremony and the reception.
Posted by Sarah at 11:49 PM No comments:

Light Rail: The Bad and The Ugly

Although the light rail is far and away the best thing to happen to the Seattle public transportation scene in decades, there are some glaring downsides which just make me wonder if Sound Transit hired a bunch of monkeys to design it rather than transportation experts from around the world. Here are some of them:

Elevators in the Beacon Hill Station. Carpeted elevators at that. First, there's a reason that almost all underground mass transit systems the world over have escalator access. Drunk guys who like to pee in secluded corners. Guess what an elevator is? It's going to reek of piss for weeks afterwards. Assuming it only happens once in a while. Additionally, escalators break down into a staircase. An elevator breaks down into a cage, as demonstrated by this video. And even if people don't pee in them, guess what? It rains in Seattle. People coming into the station need to get on the elevators. They're going to take their wet feet with them, because the elevators open into the outside. Who in the world thought carpet was a good idea for this?!

Broken Escalators. Tukwila's station had both escalators broken when I was there on Saturday, and everyone had to walk down the steps, wait in line, then walk back up. At least they were working on it. And Westlake had one broken escalator on Sunday which was roped off, but no one was working on it. Newsflash for Sound Transit: a broken escalator becomes a set of stairs. Let people use it.

Readerboards. Each station has an LED message board which says "Sound Transit". What I expected is for it to say "Next Train: 5 minutes" then "Next Train: 4 minutes", and so on. I asked a number of Sound Transit employees and got a variety of explanations, but everyone agreed that it wasn't going to display the ETA for the next train. Most of the reasons centered around the argument that the headways are so short, it doesn't matter when the next train is coming. That's completely dumb. If I just missed a train and need to wait 14 minutes for the next one, I want to know that. Even if the next train is coming in 5 minutes, I want to know that. It's really useful to know how much time I have to kill.

Another Sound Transit employee told me that the technology to do the tracking was brand new and hadn't been designed into the trains. And that buses were starting to get it, but because it's GPS-based it wouldn't make sense for the light rail. Again, I call your bluff. Sound Transit please tell your employees not to make wild-ass guesses when they don't know. The light rail goes through the downtown transit tunnel alongside these same GPS-enabled buses. Either the solution works for both, or it doesn't work for both. And it's absolutely unacceptable to have a brand new system with brand new trains without this capability. Sydney has it. Melbourne has it. Frankfurt has it. Brussels has it. Amsterdam has it. It's not a new or unusual technology. Surely Seattle has it too -- obviously the trains need to know where they are to avoid hitting each other.

I emailed Sound Transit about this issue. Their response? The readerboards are actually owned by King County metro, so they'll forward my request. In the downtown tunnel shared with buses? Maybe. Along the rest of the light rail route? Those are definitively owned by Sound Transit.

I eventually found this post on Twitter by Sound Transit which indicates that realtime arrival information is coming in the next two months. At least it's coming, though no one seems to know about it.

Swaying. When the train sways back and forth, that indicates the track was poorly installed. This problem is particularly apparent in the 5 mile elevated stretch between Rainier Beach and Tukwila. There's no reason that this problem shouldn't have been uncovered in the weeks of testing and fixed before launch.

Posted by Michal at 4:31 PM No comments:

The Light Rail opened this weekend. Well, it was open to the public for the first time this weekend -- from 10 to 6 or 8pm both days. Lots of opening day festivities, so it's not really useful as regular transportation until Monday when it starts its normal schedule. Sarah and I rode it twice -- on Saturday down to Tukwila then back up to Othello, then from Othello we took the shuttle back to Beacon Hill -- and on Sunday up to Westlake, then took the shuttle back. Sunday definitely seemed to be the busier day. Here's the really good, really cool awesomeness of light rail (and why we need to build more of it in the region):

Platforms are level with the train, allow disabled riders to board with ease. This is really important for the schedule. When a wheel chair pulls up to a bus, you know you'll be at the bus stop for 5 more minutes while the platform extends, lowers, the person rolls onto it, the platform rises, the person boards the bus and gets strapped in by the driver, the platform lowers and hides again. That's not so on the light rail. Wheel chair users roll right on, with no delay.

Payment is at the station, not at the driver's door. Also really important to the schedule. On a bus, if you have ten people waiting to get on, all ten people line up at the driver's door and pay one by one. I personally can't stand the person who's paying with pennies and dimes, but somehow failed to dig through her purse beforehand. On the light rail, come and go through any door. All ten people board simultaneously, allowing the train to get going sooner.

Stations are further apart. On my bus route, there's a stop about 100 feet south, and one about 10 feet north of where I live. What usually happens is I'm at the north bus stop, and someone else is at the south bus stop. Guess what? The bus stops twice within the 110 foot distance. Everyone on board wastes time, and at the same time gets motion sick if they're trying to read from all the stop-and-go traffic. I want to go as far as I can, without having to stop every other block to let someone else on. With the light rail, the riders are consolidated at fewer stations, so it takes less time to get to the station you want. With the light rail stations an average of one mile apart, the furthest you ever have to walk is a half mile and on average you need only walk a quarter mile to the nearest station. Yes, it's longer than walking a half block to the nearest bus stop, but the advantage is once you get on, you get there faster and with less stop-and-go.

The rails are grade separated for the most part, and get signal priority where they aren't. This means the light rail doesn't get stuck in traffic and there's less stop-and-go making the ride more pleasant. The train only runs at-grade through the Rainier Valley along MLK, but traffic lights detect the train and try to let it through faster.

Quiet. If you've been on the back of a diesel bus, you know why this is important. Light rail trains are very quiet.

Smooth. That's the advantage of running over metal rails. Blacktop distorts from the weight of busses at bus stops, making bumps. And buses are just as subject to pot holes as cars are. Seattle doesn't have the best roads, we all know this. Light rail doesn't suffer the same problem. And a smoother ride means less motion sickness.

Posted by Michal at 4:10 PM No comments: 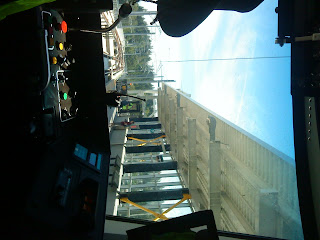 Opening day of the new transit system and rides are free today!
Posted by Sarah at 2:06 PM No comments:

Tetley and Michal vote NO on wearing 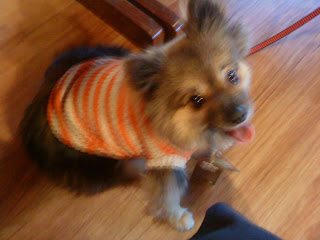 Tetley and Michal vote NO on wearing sweaters. Maybe I will try again in winter...
Posted by Sarah at 10:03 PM No comments: For everyone who hasn't already heard in one form or another, we got a dog last weekend. He's a bit camera shy, which means when I point the camera at him, he runs.

Officially, he's a Pomeranian, and weighs just shy of 14 pounds, but he's overweight. We're giving him lots of exercise and putting him on a strict diet of dog food (he was previously fed only people food, which explains how he got overweight in the first place), and he's doing great. His target weight is 10-12 pounds. He came with papers, so we know he turns four years old tomorrow, July 16th. He and Rocket are getting along great, although they are still competing for petting. It turns out Tetley has a taste for Rocket's favorite mice toys. Luckily, they are cheap, because he's already eaten one. He can catch treats and other goodies thrown to him, and has already learned sit so well that when he wants something, he does it automatically. He's an excellent companion for walks, although I haven't taken him more than two miles yet.

Happy Birthday Tetley!
Posted by Sarah at 9:43 PM No comments: The first blueberry crop from the new birthday blueberry bushes.
Posted by Sarah at 3:48 PM No comments: