For Theo's sixth birthday, we let him choose the restaurant for dinner and he wanted to go to the conveyor belt restaurant. There are three to choose from, but he loves the train delivery at the new location north of us.

It didn't even occur to me until we were in the car at 4:45 heading north on the same surface streets (because traffic on the expressway was miserable) that it's the exact route we took six years ago at almost the exact same time of day when we transferred to the hospital after 40 hours of labor.

Luckily I was much happier this time and the traffic was much better. It only took 30 minutes to make the 8 mile trip. Traffic was bumper to bumper and not moving on this surface street six years ago, so much so that even in the midst of labor I noticed and thought about getting out and walking. At this point the hospital is less than a mile away.
Posted by Sarah at 10:28 AM No comments: 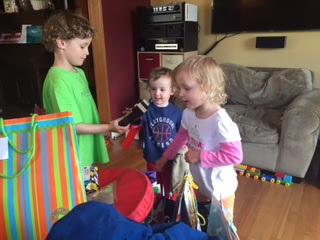 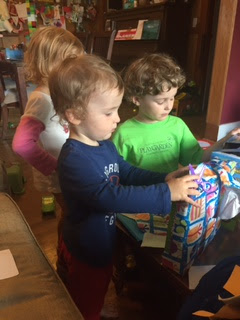 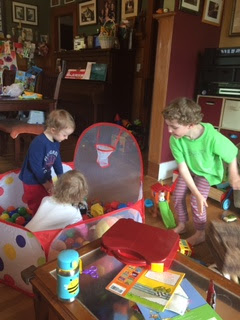 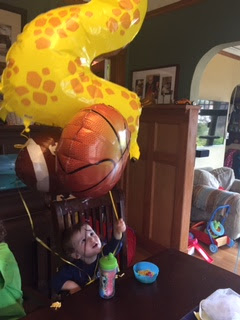 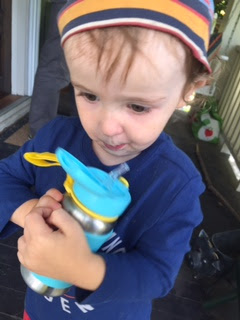 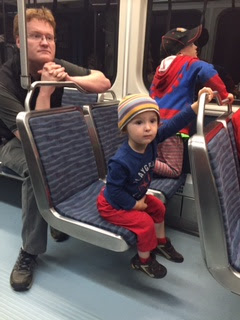 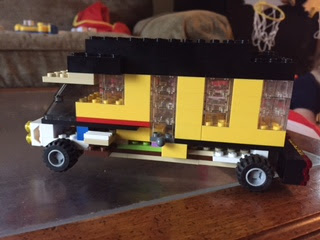 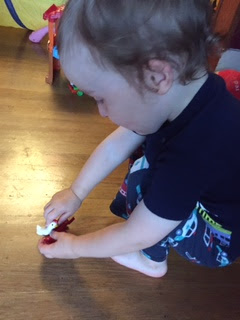 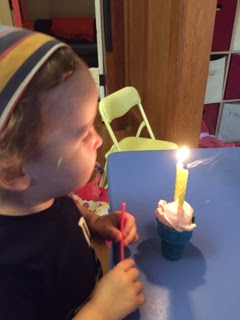 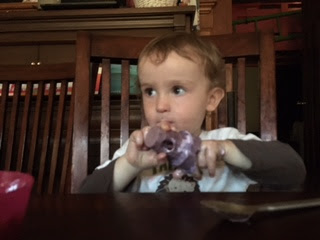 Xavier celebrated his second birthday with a couple big events. His sister's early morning hockey lessons fell on the same day of the week as his actual birthday, so for the first time we didn't do gifts before breakfast. It worked out ok, especially since he didn't know the difference. I'm sure that will change soon but for now we benefited.

We had balloons tied to each kids' chair when they got up. Xavier had a football, a basketball, a Thomas the train, and a giraffe in the shape of a number two that he calls a horse. That's mainly because I was unable to hunt down a bus or chicken balloon for him. Theo got a shark and Vivian got a "shiny pony" aka a unicorn.

After Vivian got home and when Xavier woke up from nap, we did presents. Boy did he rake in the loot this year. He scored a tunnel that he can actually fit through (crawling, but it means I can finally retire the infant one he still loves but gets stuck in), a cool cars book, a tough trucks book, a train maze with balls that move magnetically (he has finally come to terms with the fact the balls don't come out), a duplo number train, a duplo bus (which is definitely one of his favorites), a chicken coop with slide and singing chicken, a chicken with a wheelbarrow and a man to push it, train pajamas he still hasn't discovered, a bus with a magnetic alphabet, a Falcons number two football shirt, a drum set, a small popple which is a lovie that can turn into a ball, a water bottle (making a complete set of three for us), train pants, a Lego bus that Theo made for him, a dog in a crate with accessories that Vivian picked out for him, a ball pit, and two hundred balls to go in the ball pit. Xavier took the plastic scissors that came with the dog and "used" them when we needed to open more things later. He's so cute!

Opening presents mostly consisted of trying to prevent his siblings from ripping into everything while Xavier looked on. He definitely was into opening things, but he liked to take a gift out of all the packaging and play with it before moving on to the next present. The older kids couldn't handle not knowing what was in all the presents, and in the cases where they did know, they couldn't wait for him to open that specific thing.

After presents and some semblance of a lunch, we went for a light rail ride to the brand new station at the end of the line, which in a giant coincidence opened on Xavier's birthday. Because he also loves riding buses, we took a bus further from the end of the line and ended up at a pretty cool park. We had about 15 minutes to play before tearing off to a buffet for dinner around 3:45 (!) so that we could make the return trip and still get home before bedtime.

At home, we finished off the day with strawberry ice cream. When asked what he wanted for his birthday, the only thing Xavier said was "happy." After we asked enough times, he finally said ice cream. Strawberry.

We got colored cones and lit some candles stuck in ice cream for him. He blew them out very expertly! It turns out he doesn't like ice cream cones (he comes by that naturally) so he asked for a spoon to get the rest out. Once that stopped working so well, he drilled a hole in the side of the cone and sucked the rest of the ice cream out. The first time I thought it was strange but figured he accidentally punctured the cone in his excitement. The second time I watched more closely and saw him deliberately making the hole and extracting the ice cream. He's so clever.

On Sunday, we invited both Xavier's friends and their families over for dinner. We had two kinds of melon (including our first golden watermelon), a veggie tray with two dips, and tortilla chips with avocado corn black bean dip to start. The kids played outside until time for dinner, which was a Mexican buffet of sorts. Afterwards the kids' had more ice cream in colored cones and we lit his candles and sang once again. His fries a brought him a much needed pair of new shoes in size 8(!), a pair of glow in the dark skeleton pajamas that Vivian has totally absconded with, and a Curious George book.

Xavier specifically said he didn't want cake, but Vivian made a cake a couple days before his birthday anyway so I figured that covered that. It was also strawberry with cherry filling between the layers.

So all in all he had quite the celebration, though I'd be hard-pressed to tell you which kid was most excited.
Posted by Sarah at 8:41 PM No comments: