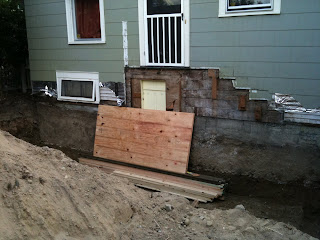 Posted by Michal at 8:51 PM No comments: 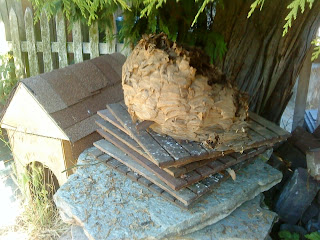 That is the wasp nest found in the "attic" portion of our old back porch during demolition. There's not a great size reference in the photo, so I'll tell you it's about as big as a yoga ball. And we thought the one we found last year in the rhododendron was huge. Come to think of it, so did the exterminator who removed it for us.
Posted by Sarah at 6:26 PM No comments: 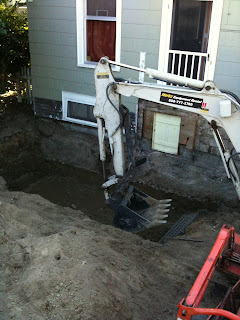 Now we no longer not have a porch but there's a giant pit in the backyard.

Posted by Michal at 6:13 PM No comments: 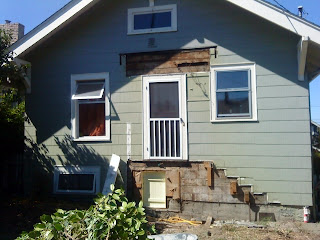 Only one day into our project and already there is a significant difference. We have no back porch!
Posted by Sarah at 8:54 AM No comments: 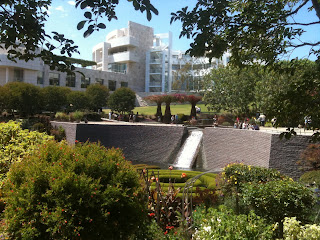 Posted by Michal at 2:27 PM No comments: 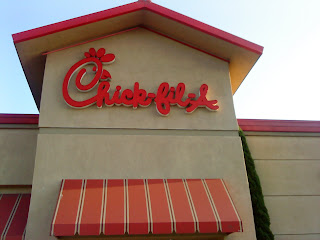 San Diego has Chick-Fil-A And that means I get to have it too. Yum!
Posted by Sarah at 6:34 PM No comments: 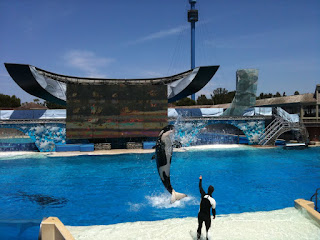 Posted by Michal at 2:16 PM No comments: 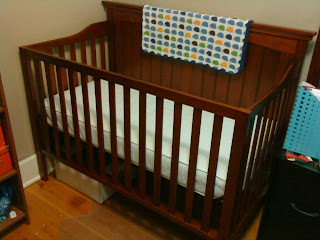 I cleaned out half the office on Sunday, which means there was finally enough room to take the crib out of the box.
Posted by Sarah at 10:33 PM No comments:

We spent last weekend in fabulous Victoria, BC. We had been once before, five years ago, but on that trip we took the Washington State Ferry to Vancouver Island. (Victoria is on the southern tip of Vancouver Island, while Vancouver the city is on the mainland and therefore much easier to visit.) This time, we took the Victoria Clipper, which leaves from downtown Seattle instead of Anacortes, makes no stops between here and there, and takes about two hours less. Of course, it's also passenger only (last time we took a car) and costs more, which is why we've never done it before.

But we scored an awesome package deal for two round trip fares, one night's lodging, and afternoon tea. On our last visit, we stopped only for an afternoon in Victoria proper. This time, we stayed there the better part of two days, and did all of our sightseeing by foot.

I highly recommend it, as we had a fabulous time. It also happened to be BC Day on the Monday, so although we didn't realize it at the time, we went on a holiday weekend to the provincial capitol.
Posted by Sarah at 3:03 PM No comments: This spring I decided I wanted to try raising chickens, and this of course involves building a chicken coop for them to live in. So starting on July 5th I spent about two weeks, mostly in the evenings, going to Lowe's. I also spent some time building a chicken coop. Only July 14th we went to a feed store in Burien and picked up some 2-week old chicks. Of course they couldn't go into the coop, so they lived in a brooder, which is a plastic bin with some wire over it and a heat lamp. As the chicks have gotten older, we've let them out for afternoons here and there in the coop where they love to eat grass and stretch their wings. Apparently chickens get to be pretty decent fliers in early adolescence -- once they start laying eggs (in about 4 months) they'll stop being able to fly as well. At six weeks of age chicks can go into the coop permanently.

We'll post photos of the finished coop and the now-older chicks soon, but in the meantime you can go through all the photos, which have been captioned with building instructions. I bought some instructions online, but didn't want to wait for them to be emailed to me three business days later, so I just started building something I thought would be appropriate. So far it's worked out pretty well!
Posted by Michal at 9:55 PM No comments: