We recently spent ten days in a lovely rental cabin on a very windy road above Gatlinburg, Tennessee. We were fortunate that many of our relatives were able to come stay at least some of the time with us. You can see all of the photos, and I'll go through a smattering of photos representative of the activities we did below:

Kasia and I started off by hiking 11 miles (round trip) to the top of Mt. Le Conte.

The Bryc family took Theo up to the top of Chimney Tops, a trail we used to do as kids.

We took Theo to the Ripley's Aquarium of the Smokies

Granddaddy Cony stayed home with Theo while everyone else went zip lining.

Kasia and I biked the 11 miles around the Cades Cove loop.

Bears came up to the door of the cabin. Everyone except Rachael saw bears no matter how short they stayed! Theo discovered that he liked to play in ball pits.

We did the alpine slide at Ober Gatlinburg. Michal went all by himself one morning and got within 2,000 miles of Maine We hiked to Grotto Falls

Theo played with tractors at Inman Farm Heritage Days
Posted by Michal at 8:40 PM No comments:

Two bottles of wine just appeared on my doorstep, courtesy of UPS and addressed to yours truly. I have no idea where they came from. Wait, that's a lie. They came from Leon. Leon, Virginia. But who sent them? If it was you, 'fess up, because you can be my new best friend. They are chocolate and peach bottles of wine. YUM!

A much better surprise than finding a pea in your child's diaper, I must admit.
Posted by Sarah at 3:05 PM No comments:

Theo had a smorgasbord for lunch today: sweet potato, banana, chicken, green peas, pasta, and great northern beans. He was wearing overalls and a green onesie. For the uninitiated, that means he had a shirt that snaps below his crotch, as well as the bib of the overalls to catch things. He also wore an actual bib, which admittedly does form a shelf to catch food, particularly when combined with overalls.

He pooped after all that food. No surprise there. But I was very surprised to find a pea (uneaten) in his diaper lying on his belly. How on earth did he get that one past the bib, overalls, and onesie?

I guess kids will always keep you guessing.
Posted by Sarah at 3:02 PM No comments: 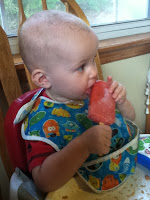 Time flies when you're a growing boy. That's Theo eating a popsicle. We spent Theo's eleventh month birthday in Tennessee with family, and we all had a great trip. (More about that once we get the photos uploaded.) In the meantime, Theo has grown into his personality quite a bit. His favorite toys, by far, are his Baby Einstein music box, where he can push the button to get classical music, and his pinwheel. They are the first two things he must find in the morning and the last two things he is willing to part with. Generally he plays the music and leaves it sitting until the song goes off. He seems to know the repertoire well enough, too, that near the end of the song, he will drop whatever he is doing and scoot back in a hurry to hit the button for more music. Given the choice between a bin of toys, a bin of stuffed animals, and a bin of books, he goes for the books every single time. He can read a book over and over and over again and not grow tired of it, and then yank another one out or off the shelf and thrust it at you with a "uhhh." Which clearly means read. And he's a speed reader at flipping pages. He loves the Priddy books most consistently, it seems. The images are real and on bright backgrounds. He also loves "Swing" which has cool moving images, and he enjoys just about any touch and feel book.

His favorite thing to do is point at something and see who will get it or let him touch it. It's usually accompanied by a grunt, and sounds of satisfaction when he gets what he wants. He's learning that not everything goes his way, and is definitely throwing a few more fits. When he is really sad, he bends over so far he lays his forehead on the floor. He hates being changed or restrained in any way save for meals.

He's eating us out of house and home and growing like a weed. Anything with feet in it is of course already too small. But I haven't managed to get any 18 months sized pajamas yet. Instead his are getting a little extra stretch and he's busy wearing the bottoms thin from scooting - which is a problem we have with all pants, even if they do fit. He's hard on shoes these days, too. He likes walking around holding onto hands almost as much - if not more - than scooting, especially outside where he can destroy a pair of pants on rough surfaces in a matter of minutes. Indoors, he will happily stumble back and forth on his feet with no assistance - as long as someone is sitting on the floor. He often closes his eyes and falls forward since he knows someone will catch him. It's great to watch but nerve-wracking as well. And he's cruising like a champ, too, from furniture to people and back again. Nothing compares to the fun of walking in circles.

He loves to take things in and out of containers. That's a popular activity, and we managed to entertain him on the airplane for at least an hour with that. He enjoys trying to feed himself with his spoon, dipping it in and out of the dish and pushing things around. He will often put finger food on the spoon, then take it off and put it in his mouth. I am determined to capture this on video.

He's eating about 6-8 ounces four times a day still. Eventually I am sure we will add another snack, but for now it's all we can do to keep him fed four times a day. His favorite seems to be beans of any kind, and avocado has finally fallen from the favored food. He likes complex combinations like banana oatmeal or papaya mango better than single items like plain yogurt or oatmeal or a single fruit or veggie. And anything that comes through a straw is highly prized. He still loves to drink from a cup with no lid, and that's good for a last resort when he gets tired of being fed and wants to do it himself. He still requires lots of entertainment while eating, mostly something to keep his hands occupied. And he's great at finger foods. His favorite seems to be any flavor of Babybel cheeses. Those top even goldfish, which are our go-to item for just about any problem.

Theo loves fish. He spends a lot of his time watching the three fish in our aquarium and has trouble dragging himself away. He loves dogs and cats and buses and airplanes, too, but I imagine it all pales compared to fish.

Theo is sleeping well still. He goes to bed around 7:30 and gets up between 7 and 8 most mornings. He generally has one feeding in the "middle" of the night, around 5 or 5:30 and goes back to sleep afterwards. For naps, they can still range from 30 minutes to about 1 hour 15 minutes, but the hour naps are much more common. He's exhausted by 9:30 most mornings and ready for nap number two at 1:30 or 2:00. He cuddles up with his flat hedgehog and has outgrown both sleep sacks - they have extra room at the corners where his feet have stretched them out. He still loves to sleep on his side or any position where he can get his legs at a ninety degree angle.

Theo makes lots of sounds and signs for "more" almost non-stop: more food, more toys, more music, more. He can say dada and mama and nana and almost anything else, but has yet to apply these sounds to one specific item. Instead he babbles happily away. His excited inhales are less frequent, but occasionally something still excites him. He also still shakes his head "no" when he's super excited. But now he does it so hard he has to grab onto something to while he's doing it.

We've got a month to go until his big day, which is hard to believe. Theo lacks for nothing, of course, but if you know someone who can't resist, he has a wish list at Amazon. It's just an updated baby registry which can be found under our last name.

In the meantime, we plan to continue watching our boy grow and learn and light up the world.
Posted by Sarah at 10:08 AM No comments:

What We've Been Up To

We've attended a lot of small events last weekend (and more generally in the past few weeks) and not all of them have merited their own mention on the blog. So I'll try and round up most of those into this single blog post full of shiny photo goodness. If you want to see more photos from each event, just click the photo posted and you'll be whisked off to the gallery.

First up, we've got Theo eating olives at home. He absolutely loves putting his finger through the middle. Almost two weeks ago we attended the first of what I'm sure will be many, many children's birthday parties; this one was for Elliott's first birthday. The very next day, our neighbors on 19th Ave had their annual block party; we hadn't been for a couple of years but we went this year. Although I'm a fan of our (18th Ave) block party which happens earlier in August on National Night Out (you've seen it on this blog), 19th definitely has the larger party! That evening, our friends Ethan and Stefanie had a housewarming party for their new home, which has absolutely stunning landscaping (which of course is only incidentally featured in the photos I took). Last Sunday was the final Beacon Rocks for the summer, where musicians take over the street outside the light rail station. Not only did Sarah's A Capella group perform at the event, it was also marked by the official renaming of the block to Roberto Maestas Festival Street and so brought out all sorts of local politicians, including the King County Executive and Seattle's Mayor, Mike McGinn. This past week I had to run to deal with the chickens fighting while Theo was eating. Although I was gone for perhaps two minutes, and despite having ensured the bowl of yogurt was out of his reach, Theo managed to yank on the placemat and get ahold of the bowl. It was a hilarious mess, and in the end it turns out he ate quite a bit of the yogurt (and especially its blueberries) on his own.

Posted by Michal at 2:48 PM No comments: