We got our tickets! Unfortunately the event takes place midweek in Olympia, but it's definitely worth making the effort to go. Sarah and I went four years ago. Highlights included the first chocolate fountain either of us had ever seen, meeting the governor, and sitting at the Secretary of State's desk. Pretty much all the government chambers were open and you could go through wherever you pleased: the court, the legislature, and more.

Tickets are $100 and you need to call (no online ordering). The website with information is nearly impossible to find; it's located at http://wastategovball.org. We'd love to have some friends join us this year, so if you're at all interested, we urge you to get your tickets soon. (You can see photos from the last inaugural ball here.)
Posted by Michal at 5:36 PM No comments: 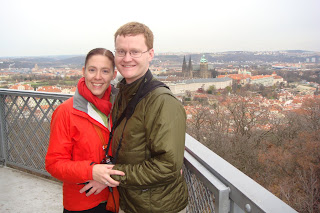 Sarah and I have both spent a lot of time over the past week dealing with all the photos we took on our trip, and I'm pleased to present them:

First, this gallery contains the best 10% (roughly 160) photos that I took.

If that's not enough or you'd like some more details, this gallery contains the next-best 500 or so photos.

Finally, I have a gallery of the rest of the photos which I took on the trip, but it hasn't finished uploading yet, so I'll have to post the link later.

You should also be sure to take a look at the photos Sarah took (270 of them) on her Smugmug site. She thinks there are too many photos so she recommends you advance by a page at a time instead of looking at each photo individually.

Feel free to leave comments or rate the photos by clicking on the green thumbs-up or the red thumbs-down.
Posted by Michal at 10:45 PM No comments: 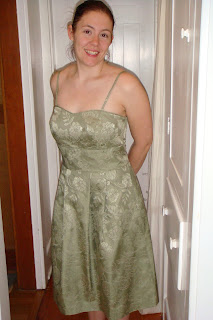 And yay for friends that work at Ann Taylor!

Today we went shopping (ostensibly for other people, but you know how that goes) because I had two coupons expiring. I got a great new dress for $15. Yup, that's right, $15, thanks to the 30% off coupon. Not that the $19.99 price was bad, either. I think it was worth it. It can also be worn strapless.
Posted by Sarah at 9:38 PM No comments:

Waking Up Isn't Hard To Do 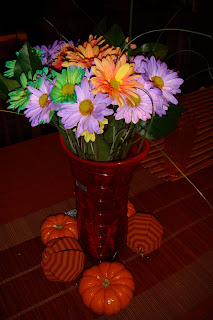 When I posted on Tuesday during the day, I thought we were back on Seattle time. I should have known better. Michal wanted to see the new 007 flick, A Quantum of Solace (better known to me as A Quantum of Toast - German joke). We went to the 7:15 show on Tuesday night, and as soon as they turned the lights down, I got sleepy. I made it through the previews and maybe 30 minutes of the show, but then managed to sleep through most the rest while trying to stay awake. If I can sleep through those loud action scenes, I can sleep through anything. I must say the theater offered much more comfort than the planes, though.

We're waking up fairly consistently around 7 in the morning, which is actually quite nice. I'm not sure how long it will last.

In other news, Michal gave me flowers for our "anniversary" on October 29th before we left for Europe. When we came home, they still sat in the vase on the table. We both had to touch them to make sure they were real (they are) because they looked as nice as the day he brought them home. I'm not sure what kind of process colors them (I'm sure it's dye of some sort) but it works to preserve them as well. They still look just like this picture, which was taken on Nov. 16th.
Posted by Sarah at 8:43 AM No comments:

We both managed to sleep through the night last night, and, in addition, it was actually night when we slept! I had to drag myself through one rehearsal in the evening, but luckily the bright lights and peppy music kept me mostly awake (although yawning). I even managed to see the remainder of the episode of House (the one that got us both on Sunday night) afterwards, but that was all I accomplished for the day.
Dragging through one work day and rehearsal sure beats waking up around 4 a.m. starving, though. Hopefully we are back on Seattle time for both sleeping and eating now.
Posted by Sarah at 1:17 PM No comments:

Back in Seattle Again!

We made it home last night, despite the best efforts of the customs' luggage carousel. We had only one hour and 40 minutes scheduled during our connection in Chicago. Our first flight landed only a few minutes late, perhaps ten, but every one counted. We had no trouble with passport control, even though we were seated in the back of the plane and therefore, theoretically, behind all the other people who might have issues. But our bags didn't come off the baggage carousel until about 30 minutes before our next scheduled flight. Even the official representative, right before they appeared, told us that unless the flight was delayed, we'd be finding another ride to Seattle.

We passed through customs in a breeze, and at that point I was relaxed because I assumed we'd be finding another flight. We gave our bags back and got kicked out of the security area, then waited for a train to haul us back to the normal portion of the airport where we had to re-enter through the normal security lines. Two people let us cut in front of them at the scanner, and I didn't bother to tie my shoes as we hit the ground running. We arrived out of breathe at the gate as they loaded first class, so we had a few minutes to wipe off the sweat of running (or in my case, attempting to run) loaded with 30 or 40 pounds of carry-on luggage. Even better, this flight had air vents so we could cool off during the trip.

The best news is that despite my lack of faith, all three of our bags sat on the Seattle carousel when we got there. I'm still not sure how.
Posted by Sarah at 12:22 PM No comments:

Today's word: sklep = store, shop Very useful to know, since it appears on a lot of signs around town.

And since I didn't get to post the last few days, here are the other Polish words of the day: (Technically these should start on Tuesday, when we hit Warsaw, but I think I was overwhelmed with Polish that day and didn't learn anything new.)

Thursday's word: teraz = now Also terribly useful, and frequently used in both sentences and as a stand-alone question, ie Now?

Wednesday's word: bardzo = very, much can be applied to just about any adjective, which is great I'll even stick it in front of English adjectives now.

We're in Lublin for the next two nights, and I'm not sure when we'll get a chance to post again. Rzeszow, another family stop, Krakow for sightseeing which we might have to skip as it's a Polish national holiday (basically Indenpendence Day on Tuesday when we planned to spend the afternoon and evening there), and Prague are next on the itinerary.
Posted by Sarah at 12:59 PM No comments:

We arrived in Lublin last night, driving entirely at night. It wasn't too bad, actually -- the only problem was we got caught in a traffic jam leaving Warsaw and the drive took 3 hours instead of the 2-2.5 it should have. Today we went to the old town in Lublin, where we saw frescoes in the church. They had been graffitied, but it was actually pretty neat as the graffiti was from the 1600's. The frescoes themselves dated to 1418. Lublin, unlike Warsaw, wasn't completely destroyed in the war, so the buildings there, while often re-newed, haven't really been rebuilt from scratch so they are slightly more authentic.

Tomorrow we're planning to go to the farm and the spring, and possibly fit in a few more things.
Posted by Michal at 12:32 PM No comments:

I think I can safely say that on behalf of Europe, the next US president needs to be aware that other countries in the world exist, and that he needs to work with them rather than acting unilaterally. The US population is roughly 300 million, out of roughly 6 billion inhabitants on Earth. ignoring the other 5,700,000,000 people or dismissing them entirely unless they bow to our command is both insulting and irrational.

We had a quick breakfast with Saskia's friend Tina this morning, then jumped in the car and promptly went the wrong way on the street,. By the time the GPS caught up with us, we had a long roundabout meandering drive through Berlin, but ultimately we got on the auto-bahn. Then the GPS made us get off, drive around a little, then get back on. After that we pretty much ignored it, heading towards Frankfurt (Oder).

The border into Poland was a non-event. I had thought there might be some cursory check of documents, but the only things in the former checkpoint were money changers (Kantory). We drove past, and Sarah drove for another 50km before we stopped and switched at a gas station, where we successfully used a Visa. We soon got to the autostrada, which is actually a bit nicer than the auto-bahn I think, and certainly much nicer than the highways in Seattle. The only problem was that the speed limits that were marked said 60, 70, and sometimes 80, but I kept getting passed. I ultimately drove 120 until I remembered at one of the tollbooths (no Zloty, but fortunately they all took credit cards, 3 x 11zl in total) to ask and was told the speed limit was 130.

The autostrada ran out around the same time that it was getting dark. We took the "car" route 2 towards Warsaw, and that was pretty unpleasant, because somehow we got off 2 and ended up following the GPS again through 702 and 703 which were tiny roads with barely enough room for me and the oncoming trucks, and lots of pedestrians and bicycles. After about another 50km of that, we made it back to 2 which was a bigger road -- still only one lane but with shoulders. The speed limit was 70, and we took it all the way into Warsaw, and found my aunt's place with no problem. We stopped right were the GPS told us to stop, and looked up, and there was the door. No one was home but my cousins, who let us in and their parents arrived shortly thereafter.
Posted by Michal at 4:23 PM No comments:

We've spent two cold days in Berlin with Saskia and Thomas, and we leave for Warsaw today. We're having breakfast with Tina, a friend of theirs before we start our 7 hour drive. We've seen the Parliament building, Brandenburg Gate, Checkpoint Charlie, Holocaust Memorial, Olympic Stadium, and palace, just to name a few. I got my first (and hopefully not last) spaghetti Eis and we had some fabulous doener and other things to eat and drink, including a pizza I ate all by myself that was three times the size of my head and extremely tasty.

We start driving ourselves today, so we'll see how that goes.
Posted by Sarah at 12:02 AM No comments:

We arrived safely in Frankfurt this morning, and customs were a breeze. We definitely should have packed more wine. Saskia and Thomas met us at the airport, and have been very successful at keeping us awake all day. We've seen the local Saturday market, downtown Frankfurt, the cathedral, town hall, two restaurants, and the supermarket. (I love German supermarkets! So many tasty things we don't have in the U.S.!)

We leave tomorrow for Berlin, and probably won't have internet again until Tuesday night at the earliest. I'm sure we'll be checking some news source for election information then.