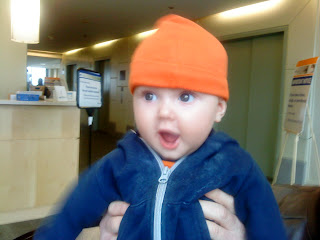 Theo celebrated his six month birthday by going to the doctor and getting a slew of shots. He did not have a good time. For the first time, he spiked a fever, which got up to 102 in very short order. Overall he was not as miserable as his temperature might indicate, still willing to smile and be distracted. In the future we will remember to do his giraffe photos before we have him shot up with vaccines, though.

At six months, Theo sits without assistance and will put out a hand to steady himself or use his very strong stomach muscles to right himself when he leans. He will still fall over fairly regularly and we are never out of hand's reach when he's sitting. But he's definitely doing it all on his own. He has also rolled from back to front a few times, but he still hates being on his stomach. He can get to his side very easily to reach for something and investigate interesting objects, but if he continues to rotate, he corrects himself very quickly. He passes objects back and forth between his hands so fast that I didn't even know he had mastered that skill - the doctor had to demonstrate for me. Only one toy will hold his attention at a time, and when presented with a second one, the first one is quickly dropped.

Theo eats eight to nine times in a twenty four hour period, with one or two additional meals of solid foods. So far he's had avocados (by far the favorite), sweet potatoes, and bananas, although today we got rice cereal, pears, and yogurt for him with the intention of introducing two new items each week instead of the previous policy of one (usually on weekends). We still offer him a bottle of breast milk , usually 1.5 ounces, after each daytime feeding, with a little extra right before bed.

He sleeps moderately well by our definition, asleep for the night by 7:30 very consistently. He wakes twice during the night to eat, once between 12:30 and 1:30, and the second time roughly three hours later. He wakes up for the day in a good humor and full of babbles between six and seven a.m. To our dismay, it's typically closer to six than seven. He wears out quickly and is back in bed for his first nap an hour and half after waking. Most days require three naps, but he's showing a strong preference for dropping the last one, which occurs around four in the afternoon. Naps these days are hit or miss - sometimes he sleeps for an hour and twenty minutes, but it's much more usual for him to pass out for only 35 or 40 minutes. While we still swaddle him for naps and overnight and give him white noise as well, now his arms are tucked and velcroed inside a sleep sack at night. (We've found he overheats inside the sleep sack during the day, so naps feature only the arm tuck swaddle.)

Theo still loves to go out. Anywhere out of the house, even the backyard to watch the chickens and birds, will do. Inside, he's developing a concern about having us out of sight. The bouncy chair remains one of the most reliable entertainment options, but he's also fine with a rotating selection of toys on his play mat and either of his gyms with hanging toys. His favorite entertainments by far are still Rocket and Tetley and nothing gets him into a laughing fit like the dog sneezing and jingling his tags. Otherwise, his new Oball probably takes first place this month, along with anything that's not actually meant to be a toy: water bottles, keys, phones, etc. Red is still his favorite color and he shows a very clear preference for it. He hates having the sun directly in his eyes but has no problem wearing sunglasses or hats to help with the problem.

Theo will soon make the switch from his bassinet stroller to his upright seat, and he also gets to have company in the form of small blankets and soft items in the crib with him. He spent an hour of supposed-to-be-nap-time today playing with his hedgehog in the crib.