Vivian celebrated her fifth birthday in style - with a party at the swimming pool for the third year in a row! She loves swimming and water. She's very coordinated and just learned to ride her bike without training wheels in early May during bike to school month. Guess all the extra practice paid off! 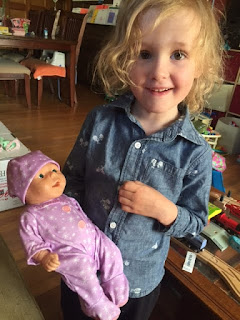 She invited her entire class of four other kids as well as pretty much every kid from her preschool to party with her. We had a great gathering although Vivian was disappointed none of her teachers could make it. We scheduled her party for the weekend after her birthday, so she'd already had lots of birthday excitement.

She picked the spaghetti factory for her birthday meal out, but sadly the one she prefers had closed. The other one we tried was also closed, so we went to Panera across the street instead and came back later in the week. 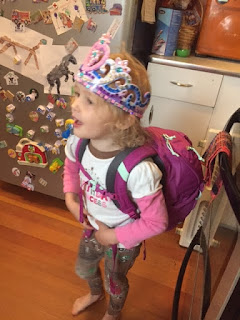 Vivian got an assortment of pink and green shiny balloons, all of which are her favorite color. She loves horses and hockey, even though she hasn't gotten to play since fall due to scheduling conflicts with ski lessons. She's very good at anything athletic and has a great start on reading as well. Her artwork has jumped by leaps and bounds. The school had to institute a two pieces of easel art per day rule due to Vivian's high production levels. They've existed for more than 12 years and never needed an art limit before she arrived. She goes to school for half a day (three hours to Theo's six) but comes home with four or five times as much art in her portfolio. She's really developed a knack for it, too.

Vivian also loves clothes, so those featured largely in her gifts this year. She likes to wear matching outfits, so I managed to score a few similar if not exactly identical items for us to wear together. She also got several dresses I thought she might like, and boy was I right. 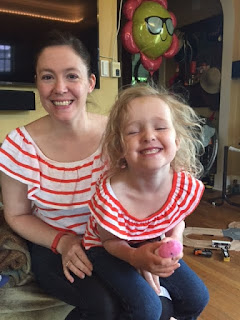 The other main theme in her gifts was horses. Theo picked out the same set of horses Xavier did for her, so instead he got her a sparkly tiara craft set. She loved both those presents best. She also got a backpack with a camelbak she had been eyeing since November from REI, as well as a camp chair in "rainbow." To celebrate the actual day, we went biking at a local park with a beach where the kids enjoyed digging in the sand when not riding bikes.

Vivian is also a great caretaker. She's bonded with the new chihuahua mix dog, Chika, and takes excellent care of her. She's very attentive and helpful with both Xavier and Theo and me as well. I can count on her to give me a hand anytime something needs to get done. She loves babies and couldn't get enough of her newest cousin. She's content to just watch him but also loves to help in any way with babies. 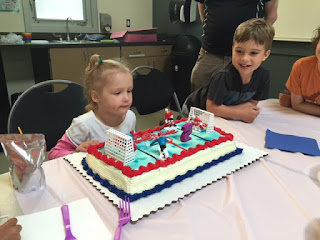 She has several baby dolls now, including a new one that makes noise and came with a complete wardrobe crafted by grandma. Her favorite doll by far doesn't even belong to her. It's a hard plastic doll that looks like a newborn with movable arms and legs that lives at school - when it's not at our house as a reward for good behavior.

Vivian wanted to go shopping for her birthday so we took her to the mall. She spent all her money on three candy bottles (with sugar powder inside), an assortment of Godiva chocolates, and a blanket and pillow set from build a bear. She really wanted a horse bag she saw at the very first shop but it costs all her money and we convinced her to at least look at her other options before blowing her savings. She'd like to go back for more shopping. 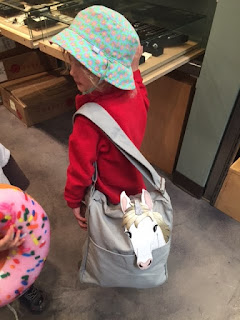 Vivian's favorite foods are pasta and bagels with cream cheese. She likes to decorate her bagel with berries or fruit or peas and carrots. She barely drinks anything at all despite my efforts and sometimes gets what we suspect is heartburn as a result.

She's growing, though she's still definitely petite. She rang in at 41 inches at her five year check up, tipping the scales at 34 lbs, which lands her pretty squarely in the 11th percentile for weight no matter which scale you use. She wears the same size shoes as Xavier, who's almost 2.5 years younger. She can still wear 3T clothes but has cleaned them all out because she isn't three anymore. Boys 4T fit her well and she wears 4 or 5T in girls' sizes. She loves outfits and puts together the best combinations that it would never occur to me to combine. When we get bags of clothes, she's first in line and everything fits regardless of size. That's how she has so many pairs of rain boots and rain coats and other outerwear. She wears it all so well I can't really complain. Her pajamas drawer is overflowing with options, and she likes to sleep in swim clothes more often than not. 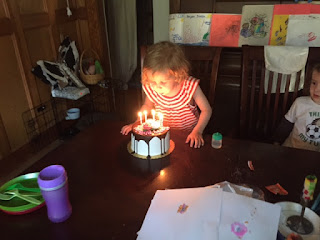 She's a night owl. Left up her own devices when's she's not sharing a room with Theo - aka the energizer bunny - she will fall asleep around 8 something and get up around 8 or later the following morning. She no longer needs naps but occasionally falls asleep in the car. If she naps more than one day in a row, she has a flesh eating infection from refusing to wear socks and rubbing a blister on her ankle.  Or phytophotosynthesis, both of which happened recently.

Overall, Vivian is a complete joy and I've loved our special time together doing projects and other activities in the afternoons. 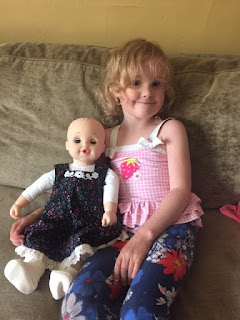