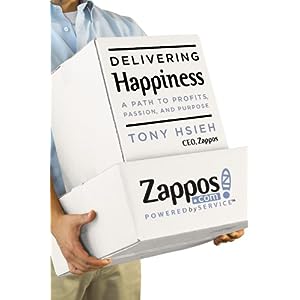 Okay, so I don't regularly do book reviews here (ie, never), but a few months ago I came across and signed up for a special program for bloggers where the publisher would send you an advance copy of the book if you were 1) a blogger and 2) promised to put a review of the book on your blog sometime during this week. Apparently having a blog makes one a blogger, and so I got a copy of the book. Read through the entire review for a special reader bonus!

The book is, clearly, about Zappos, but the first half is really an auto-biography where Tony Hseih introduces himself and summarizes his entrepreneurial efforts starting with mail order businesses in childhood through his first job as a college graduate which lasted all of five months before he quit and founded LinkExchange. I didn't know he was behind LinkExchange, a banner ad trading network for websites in the early 90s in which I myself was a member. Of course Microsoft bought the company in 1996 and effectively killed it, but Tony took his money and started investing in other companies.

Ultimately he's convinced to invest in an idea which ultimately becomes Zappos, and Tony gets involved in the company as CEO when it's on the brink of bankruptcy and he cashes out his real estate and personal wealth and pours it into the company. The second half of the book is focused primarily on this process and bringing Zappos through its dark days into a profitable and well respected company.

Unfortunately there's a section in the middle of the book which goes over Zappos' ten core values with 2-3 page essays written by Zappos employees. While Zappos has somewhat non-standard core values, and the essays attempt to give varied personal perspectives on each value, the end result is a not-quite-cohesive hodgepodge of brief stories.

The book itself isn't a very dense read and goes quickly. It can be pretty enjoyable, but go into it with expectations of fluffiness rather than a serious discussion of business practices. There's a disclaimer in the very beginning from Tony where he makes it clear he's not a professional writer and he's not using a ghost writer, and while I appreciate the honesty, you can see why.

In addition to sending me an advance reading copy so I could write this review, the Delivering Happiness Crew also sent a second copy for me to give away. So, if you'd like a free copy of this book, leave a comment on this blog post before June 10th with enough information so I know who you are, and I'll pick randomly and send it to you. As of right now this is the top selling book on Amazon, so it's clearly popular.
Posted by Michal at 10:31 PM