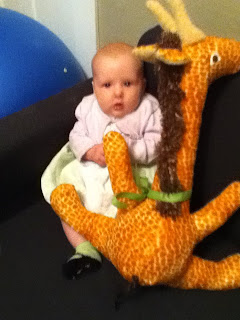 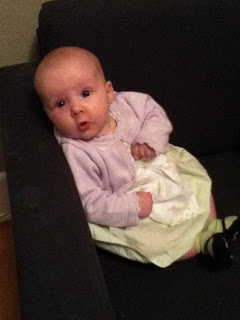 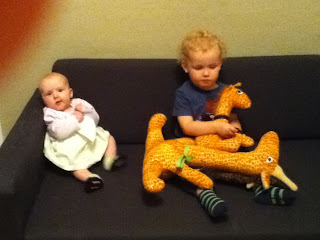 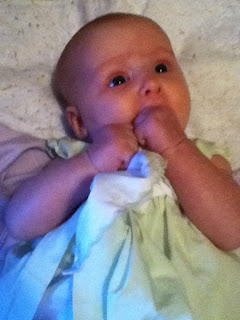 Vivian is three months old today! We took her giraffe photos tonight with the help of her big brother. Vivian is so mellow, the bright flashing lights don't phase her. She turns toward them to try and figure it out instead, which makes for great photos. She doesn't smile as much because she's too busy either talking or trying to stuff her dress into her mouth. She loved this dress almost as much as I loved dressing her in it! We picked out a new outfit for the special day, and she took to it (to her mouth that is) immediately. Thanks to Martha for picking something so spectacular, and we know the color scheme will make her cousin Xoey jealous. Vivian particularly seems to like the double layer to choose from, sometimes tasting only the top pinafore and sometimes picking up the entire dress.

Vivian continues to charm just about everyone she meets. She loves to talk. We don't play with toys that often, although she is beginning to show interest in them. She is ticklish now, and enjoys a good game of Duck Duck Goose for babies, where I move her closer and closer to me with each "duck" until I goose her. A round of the elevator song will also usually distract her from a bout of fussing. She cries, but not often and not loud, so when she has real tears I pay attention. She's generally fussing about food or sleep, which relate back to a very strong preference for boob. Last night she refused to take a bottle for the first time, although admittedly we hadn't tried in several weeks at least. She will suck on just about anything, including the face of her big round stuffed fox and a hard plastic soccer ball on one end of a baby rattle.

She definitely follows both Theo and Tetley with interest now, and she loves to stand. She gets mad when her legs give out and she sits down. She hates being put down, and will fuss for a minute or two until she adjusts then she continues to sit and take everything in. She lights up a thousand watts whenever anyone stops and makes eye contact.

Theo continues to be the sweetest big brother. He is still concerned about getting buzzed by the Blue Angels from the beginning of the month, so he puts his hands over his ears and constantly asks us to do so. On Monday he put his hands over Vivian's ears so she wouldn't be scared. (They never bothered her.) Also on Monday he moved her hands and arms through all the motions of wheels on the bus (his favorite song by far), and got piqued when she couldn't do the motion for "tickets please." It's incredibly cute and sweet to see him sharing his favorite things with her, even for just a minute or two, like his lovey, jez, and his milk cups. He also loves to give her hugs and kisses and receive kisses from her whenever she stands up on the floor. He really wants her to walk around when she stands up but I have a feeling that's several months off. :-)

Her longest sleep spell is a little over eight hours, and we're all quite happy with her sleep habits so far. She eats frequently, still around every 1.5 to 2 hours during her day, which runs from about 9 a.m. to 9 p.m. She is definitely an evening child, with her happiest and most alert period in the early evening or right before bed. Bedtime still ranges anywhere from 7 something to 10:30, although the range is getting narrower as the days go by and those times on either end are more and more infrequent.

She loves to eat, sleep, and hang out on the boob. She likes to check in frequently to make sure it's still there. I have no weight or height data again until her four month appointment, which coincides with Theo's two year appointment, so we will see if all her eating is paying off. But she does have some adorable fat wrinkles on her arms, neck, and thighs, and her belly definitely has a pooch to it. She is comfortably in 3 to 6 month clothes, and six month socks. In fact I need to bring up her box of six month clothes because I'm afraid she might outgrow some of the stuff before I get it cleaned and put away for use.

All in all she's a delightful baby and we're falling more in love each and every day. These are a sample of photos from today's shoot with her giraffe, and they are great representations of her personality.