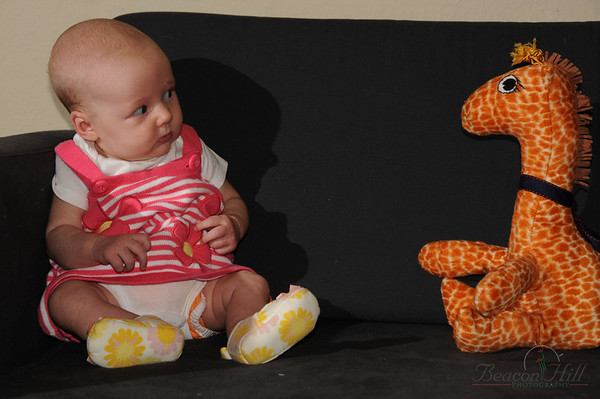 I'm behind on Vivian's two month update. That's probably not surprising, but there are two contributing factors: 1) August has been incredibly busy here. We had Seafair activities the first weekend shortly after her official two month birthday on July 29th. Then guests visiting, followed by camping on the beach. And that brings us to this past weekend; 2) Vivian's two month doctor's appointment actually didn't happen until August 10th. Her pediatrician was on a three week vacation and that was the very first day he was back. I know because I called to try and get her seen earlier, the week after she turned two months, because she was eligible for the pertussis (aka whooping cough vaccine). And there's an epidemic of pertussis here, which has made me a bit more nervous than usual with a newborn, if such a thing is possible.

In any case, I didn't get to post on the 10th as planned because we were busy packing for camping on the 11th. And I spent all of last week recovering from said camping trip, not to mention three of us came down with a cold.

So here is the two month update, one day shy of twelve weeks old. Sigh.

Vivian had her two month appointment. She skipped the one month appointment because she did so well (ie gained lots of weight) at her two week visit. She weighed in at 11 lbs 5 oz, which put her in the 48th percentile (CDC - 36th for WHO), with a height of 23.50 (a two inch increase over last time) which falls into the 77th CDC percentile (73rd for WHO statistics), and a head circumference of 15.43 inches (48th and 63rd percentiles respectively). She got 6 vaccines. Luckily that was in four doses, and one of those was oral, so she only (only!) got three pokes in the thighs. She did not appreciate it. And unlike Theo, she refused to nurse through such an ordeal so she cried pretty much until we got back to the car.

She also spiked a bit of a fever (100.7) by that evening. She had a runny nose going into the appointment, but we're attributing the fever to the vaccines.

Vivian is still an absolute joy of a child. She's got such a personality shining through now. She cries because she's hungry or tired, which amount to the same thing - she'd like to be on the boob. She would spend all day on it, eating or using it as a pillow, if she had the option. As it is, between the hours of about 9 a.m. and 9 p.m., she eats roughly every hour and half. Two hours is a long time between feedings for her. She snacks for an average of five minutes a side, and nine minutes on one side is a long feeding for her. She almost always has to burp afterwards, and that's accompanied by spitting up. Once she spits up or poops, she's generally hungry again immediately. So we spend a lot of time eating and more time trying to catch the spit up. During the day she is much fussier about eating. I've tried to push her out a bit since her appointment to get her to eat in larger portions less frequently, and although her timing hasn't changed much, she seems a bit calmer during daytime feedings. At night she has zero issues feeding, burping, or spitting up. She still does all three, but with zero fussing.

And speaking of night, she rarely cries during that twelve hour period either. Once she goes to sleep, she's unlikely to make any sound until she gets up for the day. She is sleeping in one long chunk, which is at least four hours straight and generally (at this point at least) six hours long. She's made it almost eight hours once, but that wasn't really comfortable for either of us by the end of it. She wants to go to be between about 7:30 and 10:30 and it's completely obvious when it happens. She sleeps her long spell in her bassinet, swaddled. I started swaddling her against her wishes just for future use and she has adjusted. But in general, she's still so easygoing that she doesn't really care if she's swaddled or not. As long as she gets fed proper she's good to go, and once she's asleep you can pretty much drop her in and she won't wake up.

If she does stir, a pacifier fixes the problem and she shoves her head against the bassinet wall (strangely, against the cloth part against the actual wall, rather than facing out into the room like most infants) and goes back to sleep. She adores her soothie pacifier attached to a little stuffed from (thanks Paul, Jen, and Simon!), so much so that when I forgot to pack it for camping (it was still laying in her bassinet from overnight use) we stopped and bought a two pack of soothies at the store. Best decision ever! If a pacifier does not fix the problem, she has to burp, which almost always requires picking her up. Sometime she will burp, urp, and go right back to sleep with hardly a hiccup. Sometimes the burp is enough to keep her up until her next nap time.

Vivian spends the rest of the night in bed with me, nursing every hour or two. The length of time depends on how lazy I am (generally very lazy) and whether she nursed on one or both sides in the previous feeding. She pulls both arms out of her swaddle during the course of the rest of the night so that by morning she is only swaddled around the waist. She gets up fairly consistently between 8:30 and 9:00 a.m. for the day. She can get up earlier but wants to go back to sleep shortly thereafter. She is definitely more a night owl, and the early evening hours are almost always her happiest. That might have something to do with the fact that two adults are home and she gets more attention then, but I think it's also part of her personality.

During the day she still naps frequently, rarely for more than forty minutes at a time. She manages to stay awake an hour and wants to be back asleep around 10 a.m. on a normal day, although she can go longer if things are interesting, also known as we are out and about. She still naps in the sling when we aren't home, and swaddled in the bassinet when we are. She will stay up two hours, maybe a bit longer, before she goes down for her longest stretch of sleep at night. Of course on Friday she took a 3.5 hour nap, and on Saturday she went to sleep for six hours starting at 3:45, so we definitely don't have a schedule per say. It's more of a general pattern.

Vivian remains very mellow and laid back. She does not like to be denied food but a pacifier can buy time if she's with someone else and say, Theo needs to be fed, or changed or put to sleep. She seems to prefer to be at home more than out and about, but goes along with whatever is happening. She does nurse and sleep best at home, but the sling is a close second.

Vivian loves to be held. She's not particular about who it is, and if she cries while held, she's either hungry or about to spit up. You can tell which based on how long it's been since her last meal. She has discovered her fists and likes to suck on them. She's fascinated with her feet now, especially when she's wearing socks or shoes.

We don't spend a lot of quality time playing or with tummy time, and it shows. She hates tummy time. And our idea of play is to lay her on the bed and chat. She loves to chat. She is content to hang out indefinitely but as soon as someone stops to talk to her she lights up and chatters back with pure joy. She has just started crying when she thinks she's been abandoned, which pretty much amounts to anytime you put her down in her swing. In all fairness, I usually only put her down because I need both hands to do something else. On her playmat, she loves her hippo best, possibly because Theo still has ownership of the monkey that lights up and plays music. She is also fascinated with the mirror. Just in the past week or so, although she doesn't grab at toys yet, she seems to have realized that her kicking and flailing makes something happen. She does both repeatedly for the reward of the jingles and crinkles that result.

Vivian can imitate noises very well, and has learned to shriek with joy and even has laughed just a few times when Theo has been laughing. She is extremely talented at imitating Michal when he and Theo are playing chase, and tends to make noise as they run past back and forth.

Vivian has no hair to speak of since it all fell out. It's a bit longer in back and there's just enough so that when you pet her head it's super soft and adorable. Her eyebrows and eyelashes are more noticeable, and her eyes are an indeterminate color that seems to range from gray to hazel depending on what color she is wearing and how much light is available. She's long limbed like Theo and is mostly in her 3-6 month clothes. Her newborn pants are all shorts now, and today for the first time I put her in 6 month leggings. She did not look ridiculous. They were loose but not absurdly long, which probably means she will outgrow her three month footed stuff in the next week or so if not sooner. The weather has been warm enough that she hasn't worn much long sleeved or long pant outfits. Generally it's sleeveless jumpers and dresses with bloomers.

For Vivian's two month update, I finally managed to post two galleries of photos from May (just a few newborn photos along with all Theo's from that month) and June. I'll try to get July up sooner but no promises.