Xavier's One Week Check up 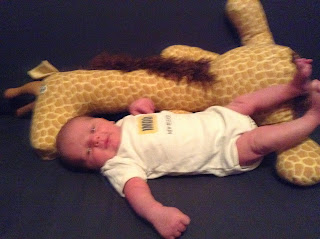 Xavier had his first visit with the pediatrician last week, which was also his first time outside the house. The weather was clear and sunny and except for the loading process into the bucket car seat, he had no objections. Michal had to check on him multiple times during the 20 minute drive to make sure he was still breathing.

He did well at the doctor's office. He did not want to open his mouth and made some very advanced attempts at pushing the doctor's hands and stick away but otherwise remained unperturbed.

Our pediatrician has moved practices since Vivian was a newborn. We were concerned about exposure as the new practice does not have a newborn waiting room or even a separate area. But it turns out they just take you immediately back to the exam room if you have a baby.

Xavier weighed 9 lbs 12 oz, which means he was exactly back up to his birth weight. He grew half an inch to 22.5 inches and his head circumference increases by one centimeter to 38.

In other news we finally got around to capturing Xavier's first giraffe photos. In case you have seen the giraffe photos from our older children, you should know this giraffe (much like this child) is a significant portion larger than previous giraffes. We did not get all three giraffes in the photos for comparison's sake. Maybe we will make that happen next time. In the meantime, enjoy!
Posted by Sarah at 10:58 PM