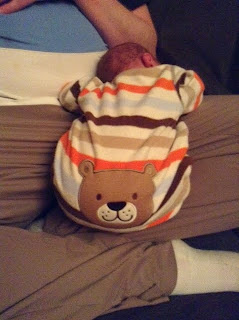 Xavier had his two week checkup with the pediatrician mostly to see how fast he was gaining weight. He was at his birth weight at his one week check up but we didn't know how far his weight had fallen and come back up.

I was not concerned as he had weighed in at the midwives' appointment the previous day. That weight was 10 lbs 1/2 oz, which was 4.5 oz in five days when half an ounce a day is considered good.

At the pediatrician Xavier excelled, weighting in at 10 lbs 8 oz - a 7.5 oz gain in 24 hours! He also grew a quarter of a inch in a week to 22.75 inches and his head circumference remained the same.