Xavier at One Month and Six Weeks 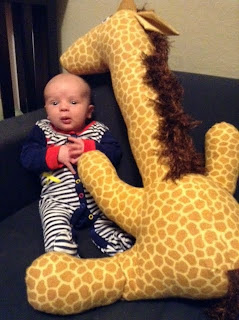 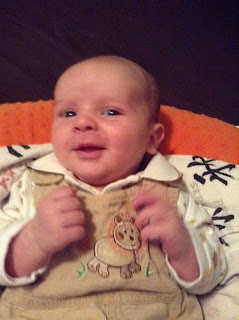 Xavier, the baby who put on half a pound in 24 hours for his two week check up, doesn't have another appointment with the pediatrician until two months. In the meantime I've been tracking him less officially at other places just to have the data.

At one month Xavier was eating and sleeping like a champ. He weighed in at 11 lbs 9 oz, which was another one pound and one ounce increase in a little over two weeks. At night he's sleeping in two to three hour chunks from about eleven p.m. or midnight to nine or nine thirty in the morning. Most nights he has one four hour chunk until either three or four in the morning but it's not so reliable you can count on it occurring.

He's nursing only on one side at night which leaves me pumping once a night as well. I generally average six ounces in that pumping session even if he's emptied one side so we have a decent stash of frozen milk.

During the day he rarely goes more than two hours between feedings. A feeding session generally consists of both sides but he's okay with only one though he will eat again in an hour in that case. In the evenings around six or seven he starts cluster feeding, and pretty much nurses unless he's burping or getting changes until he falls asleep for his long sleep period.

By three weeks he was wearing three month sized clothes. I retired all the remaining items from the zero to three box of baby clothes and broke out the three to six month box. The six month stuff is too big for him at one month old but anything labeled 3-6 months on the tag seems to fit just right.

With Michal's return to work and my parents' departure I also switched him over to cloth diapers. I may need to get new covers to fit his chunky thighs better because he often soaks through them at the leg holes.

He had his first bath at three weeks old. It took me a while to get around to that. Both Theo and Vivian were anxious for him to join them at bath time. Xavier got to use the baby bucket for his bath and spent most of the time trying to drink the water once he figured out what was going on. He gets a bath roughly once a week most weeks.

At six weeks Xavier looks totally different to me. His baby acne has cleared up on his face and his skin is much less red all over on general. He's still got most of his chub as far as I can tell. We checked his measurements a couple of days before he turned six weeks. He weighs 12 lbs 8 oz, an increase of almost exactly a pound in ten days. Even with that jump his percentage dropped from above 97 to 90th percentiles. He's 24 inches long, an increase of 1.25 inches since his two week appointment. That keeps him in the 96th percentile for height. And his head just shy of 16 inches, putting that in the 83rd percentile. (All those percentiles are on the CDC growth charts. I have the WHO percentiles too of course.)

The biggest development is that Xavier starting giving us social smiles at exactly six weeks. He's not very generous with them yet so it's still totally a thrill every single time he shares one. Previously he's only smiled a couple of times at the fake fish tank which he loves to sit and watch.  As of today he's started cooing as well, which was irresistibly adorable.

Xavier had his first five hour chunk of sleep at five weeks and three days. It was awesome! He's still going two to three hours between feedings at night after his first big chunk of three to five hours. He's done five hours once since then. With the time change, he's tired around ten p.m. most nights and out by eleven. He's up pretty consistently sometime between two and three to feed. I'm still pumping once between two and seven in the morning as well.

During the day he's rarely awake more than two hours and one and a half seems to be the norm. He's a sleeper for sure. I finally started tracking his sleep about a week ago and it's generally 16 hours a day or more. If he stays awake more than two hours he gets very cranky and it takes much more effort - ie some -  to get him to sleep. He definitely prefers being held upright. And swaddling and shushing him with some sort of rhythmic movement usually does the trick.

He's still eating for about two hours total nursing each day, in 19-23 sessions most days where a session is one side. During the day he does both sides unless we are trying to be somewhere on time and I cut him off early.

Xavier is an optimist who will suck on a pacifier in hopes of milk coming out for twenty minutes or more before he gives the up the gig. We have not tried him on a bottle yet though it's on the to-do list. Mostly that's because I'm not anticipating any issues. I am looking forward to getting rid of the variety of different brands of bottles we have once we know he takes one type.

Xavier remains pretty mellow overall with the exception of car rides. He hates being in the car especially if we are going less than twenty miles an hour, which is frequently the case. I added a very warm blanket this last week and that seems to help a bit. He's currently riding in an infant seat in the back row next to Theo. We've already had to move the straps up one notch and I suspect we will move to the third and highest notch shortly. Sometime he will suck on a pacifier on the car but no guarantees. And he cries if his hat falls down and covers his eyes. That's often a problem because most the hats we own that fit the circumference of his head are much too long and especially in the car when he moves his head, the hats slide down.

Speaking of moving, Xavier is extremely strong. He can hold his head up for minutes at a time even on his belly. Belly time last week didn't last long as he rolled himself over from front to back because he held his head up and then to one side and the rest of him followed suit.

I can still squish Xavier into 3 month clothes in a pinch but he really only fits into the 3-6 month stuff. I need to get the six month smaller stuff into his drawers soon at the rate I'm retiring clothes that no longer fit. We've also moved him into size two diapers, though he never fit into newborn size anything so that's only the first size upgrade for disposable diapers.

Overall he's still super cuddly and only getting sweeter and more fun by the day. We look forward to the next developments!
Posted by Sarah at 3:53 PM