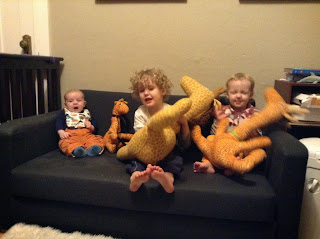 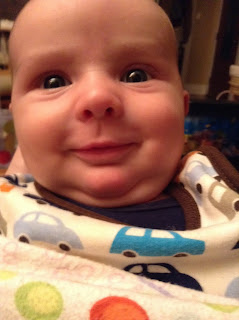 Our Chunk is even chunkier! I took advantage of the kids at a friend's house to clear out some of the top small clothes and bring up the six month sizes to augment Xavier's wardrobe. He can still fit into small onesies fairly well but things with feet like footed pajamas are tight in the 3-6 month size. The 6 month bear suits have a bit of room to spare and are long in the arms but by no means look ridiculous on this two month old baby.

Xavier is still a champion eater and sleeper. He nurses right at two hours total in a twenty four hour period. That's typically in about 20 sessions, though during the day a feeding is two sessions which is just a fancy way of saying both sides. At night the supply is good enough and he's sleeping long enough I can get away with only one side per night. I still have to pump once a night with an average take of seven ounces. Since I have yet to introduce a bottle - which is both sheer laziness and lack of need or a looming deadline like returning to work - that means we have more than 500 ounces frozen. I anticipate the supply dropping in another four weeks or so like it did both the previous times and assume we will need the stockpile then.

As for nights, Xavier is going at least one four hour span without any nursing once per night. He's gone as long as seven hours (that's happened once) and five hour stretches are happening more frequently. After the first big stretch of three to five hours, he's generally feeding every two to three hours then every hour to two hours the remainder of the day. In the evenings right around 7 pm when the bigger kids are finally settling down he starts cluster feeding and rarely goes more than an hour between feedings.

He's sleeping about 15 hours or so every twenty four hour period and that's in 9-12 doses including the long period overnight. He's generally asleep by 11 pm, sometimes a bit earlier, and loves to sleep in. This weekend he slept in until 11:15! It's typically closer to 9 am and I have to wake him up four days a week to get Theo to preschool anywhere near on time, which is 9:30. He's had a couple two to three hour stretches of sleep during the day over the past week but nothing routine yet. The warmer he is, the longer he's likely to sleep. I've taken to double swaddling him especially at night. In one swaddle he almost always gets loose and the extra layer keeps him warmer and nets me more sleep at night or time for other things during the day.

Xavier has slept several of his longer periods at night in his bassinet but it's by no means a guaranteed thing. He often eats constantly to get to sleep and I've learned that after burping him I can sometimes put him in the bassinet for the night. During the day he will sleep just about anywhere: in the swing, the baby Bjorn, the sling, on me, in his car seat, swaddled, unswaddled, doesn't seem to matter much.

Speaking of the car seat, Xavier is still very mellow except for three things: car rides which make him cry until he falls asleep which is generally only at speeds of thirty miles an hour or faster, having his hat over his eyes, or uncurling his fingers for a fingernail trim. As a consequence his nails are often too long as there's nothing quite like the guilt of making a baby who rarely cries cry.


Hats are a particular problem because all the ones that will fit around the circumference of his head are much too long for his face and end up covering his eyes.

Xavier is definitely smiling and cooing at people. It's super cute and sweet and he will totally engage in a conversation with me now going back and forth. He can track people quite well from side to side including moving his entire head to follow them.  I haven't had any success with him tracking up or down and he only tracks objects that intrigue him. Generally he seems more interested in people than things unless it's his fish tank. That's a fake fish tank that lights up and revolves and he will watch it indefinitely except that after three years of abuse by two other toddlers, the light bulb finally burned out. We just got the replacement tank.

In just the past three days or so I've noticed Xavier grasping objects and holding onto them. Up until then he left his hands pretty much curled into fists the majority of the time. Now I've seen him grab and move his flat bunny lovey at least twice and today he got a good grip on his bib as it was lying on his belly before I fasten it around his neck.

Yesterday he noticed his feet for the first time and was quite taken with them.

His two month appointment is coming up next week and I'll post updated measurements then.