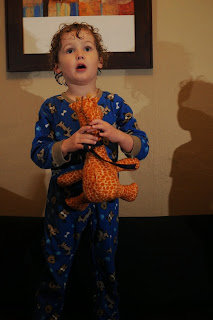 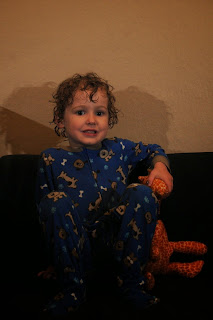 It turns out they did get to go together, thus saving me a schlep. But the first appointment I could make for well four year olds back at the end of September was in December.

Theo is 42 inches tall and weighs 37 pounds. We just turned his car seat forward facing back in May at a little over three and a half years. (In a side note, Vivian outgrew by height the smallest convertible car seat we had and got upgraded to the next side. She's still rear facing though.) Those measurements put him in the 71st and 53rd percentiles for height and weight respectively. So basically he's getting much more proportional as the percentiles on each measurement gravitate towards the middle of the bell curve.

For the first time, Theo had his hearing and eyesight checked as well. He aced both exams, which is awesome. Sometimes, based on how often he repeatedly says "what?" I think he must have hearing issues. But apparently it's just the usual male pattern selective hearing at work.

Theo balanced on one foot, failed miserably at drawing squares and triangles but aced the circle and x, and had his back checked as well. Also for the first time he got a brief introduction to only doctors and parents can touch you under your clothes, which was interesting.

Overall he didn't miss any milestones like going up stairs with alternating feet or any of the other questions. Since he pees only three to four times daily we are upping his fluid intake to encourage him to use the potty more often. So far that seems to be doing the trick.

We did also finally get around to taking his four year giraffe photos. In case you notice, his hair is still sopping wet as he's fresh from the bath.

You can see all the photos here:
http://furchin.smugmug.com/Children/Theo/Theo-Four-Year-Giraffe-Photos
Posted by Sarah at 8:07 PM