Vivian at Two and a Half Years 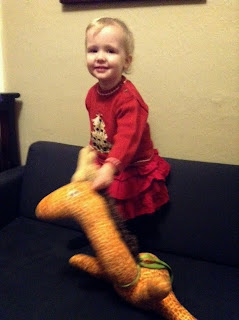 Where to start in describing Vivian at two and a half? She's got such personality and all her own style.

Vivian is, true to form, still our big eater. She's definitely a carnivore and still doesn't much care for beans and alternate forms of protein, though she likes peanuts and cashews well enough. Her favorites hands down are macaroni and cheese and cheese quesadillas, though any pasta is generally fine. She loves dried strawberries and fresh berries and corn but isn't as much of a vegetable eater otherwise. By that I mean when you put vegetables in her lunch box it's hit or miss whether she will eat them or not. Mostly she wants to eat what she sees other people eating and when she's hungry she can put away some serious amounts of food. She can eat two to three chicken tenders and three to four kid-sized bowls of macaroni and cheese. Pizza is also very popular but she's in that phase where she likes her food to look familiar. She objects to things on her pizza or in her lasts or quesadilla not based on taste (because she won't even try them once she spots them) but on appearance and often has us remove the offending parts.

Vivian dropped her second nap right around her second birthday. I think it stuck around that long because she shares a room with her older brother overnight. He wakes her up thirty minutes to an hour before she would get up on her own. She's still definitely a night owl and not much of a morning person so nothing's changed in that regard. We sometimes stagger bedtimes for the kids depending on how Theo's nap went (and just in the past week if he's had a nap, which is getting up be very rare). When we stagger bedtimes Vivian starts around 7 and is in bed by 7:30 at the latest after changing into her (usually at least two pairs of) pajamas, reading two books and flipping through a third one, turning on the noise, and the elaborate ritual she has arranging animals, also called lovies, and getting tucked in under multiple blankets with the pillow on top.

In fact her bedtime routine will give you a good glimpse into her personally. She wants to put her own clothes on now. She can definitely manage taking her pants off but needs a bit of help with shirts and dresses. She has no trouble taking her diaper off. She then sits on the fresh diaper but allows me to fasten it. She puts her own pants on but mostly gets stuck on the diaper in the back and needs a hand pulling them up. Then she dives into her shirt(s) and is ready to deliberate reading materials.

She loves Thomas the train books and really likes to read out loud herself now. The best ones are simple books she has memorized but if she doesn't know it all she will describe something on each page instead. Typically that's colors but can also be numbers or letters. She knows her numbers pretty well and can count to about sixteen reliably. She knows about half her letters including her favorites, V, T, M, D, and G. The other day she informed me that one and two makes three which blew me away because of course she's right.

Then she needs to turn on the noise machine herself and climb the arm of the sofa conveniently located right next to her crib. She hoists herself into bed by sitting on the railing and swinging her legs in and gets herself out doing the same steps in reverse.

Once in the crib she needs to "make room" which involves moving fifteen or twenty stuffed animals into a precarious pile on one side of the crib, clearing enough room for her to lay down. Then she needs specific animals in very specific locations next to her but facing certain directions. The actual animals required for this precision step vary from day to day and even between nap time to bedtime. After they are all arranged to her satisfaction, (I've learned to hand her animals and make her place them rather than frustrating both of us by getting it wrong multiple times) then she needs to be tucked under her blankets. The "soft" yellow fleece one with a duck on it goes first and make sure her feet are covered and the edges are tucked under her toes. Then the fox blanket next and beware if every animal isn't tucked under the blanket. Finally I turn on the "beep beep" which is actually a SIDS monitor that alerts should she leave her bed and close both doors and turn off the light. Last but far from least she needs to "tell you something." Up until the week of Thanksgiving that something was always "go to swimming pool and fireworks next time." Now it has changed to "tell [person's name] when I need to go potty."

That'd be a fabulous plan if she actually did it but she doesn't. Vivian would prefer to stay in a poopy disposable diaper to changing anytime. She was in cloth diapers until 28 months but got switched full time to disposables when Xavier was born. She had been wearing disposable to preschool before that. She was better about changing when the diapers were cloth and super interested in the potty. Her interest has since waned almost completely and most diaper changes are a full scale battle unless Xavier lies down next to her.

Luckily she only needs changing before nap unless she's poopy. Nap starts around 1:30 though she is flexible. Much like bedtime, which can start as late as 7:30 or 7:45 when Theo is going to bed at the same time, naptime varies. Preschool lasts until 2 so she doesn't have much choice about starting late those days. She generally naps about one and half to maybe two hours. She sometimes hits three hours and those are really good days. She gets up whenever Theo wakes up and yells "Wake up Vivian!" That happens around 6:45 though they have to remain in bed and somewhat quiet until at least 7:00. Vivian would sleep in until 7:30 to 8:30 left to her own devices. She prefers a nice twelve hour stretch of sleep overnight.

Vivian nursed once a day upon waking in the morning until the day Xavier was born then ceded possession to her brother with nary a blip. I had gotten her down to one side but was too lazy to get her competent weaned. Lucky for me that worked out despite my apprehensions.

Vivian loves to pick her own clothes every day. She chooses interesting combinations but has the verve to pull it all together and it somehow works despite my doubts and reservations. If I had a tenth of her style sense I'd be all set. She is pretty decent at dressing appropriately for the weather in that she now picks one or more pairs of pants and a shirt with a heavier layer like a fleece or cardigan on top. She loves pink leggings best but any leggings will do. And her one short sleeved just happens to be glow in the dark Thomas shirt is her absolute favorite. She will wear it three days running including overnight to bed instead of removing it in favor of pajamas. She would wear it every day but after three days and two nights straight I force or bribe her out of it. Really I try and draw the line at wearing to school two times in a row since preschool days are not back to back.

Vivian attends what we call drop off preschool which is just our way of saying I don't have to work in the classroom or volunteer or do anything besides write a check once a month. Over the summer she went one day a week with Theo from 9-2 on Thursdays. Theo graduated in August (they have only two age groups, two's and three's) and Vivian joined the two's class in the fall. She attends twice a week, on Tuesdays and Thursdays, from 9-2. Her favorite things there are dressing up and playing outside.

Vivian loves riding on anything and has just recently mastered pedaling the tricycles at her preschool. She asks to go play in the backyard constantly. The only thing she likes more than the backyard is swimming at the heated indoor community pool. The kids were both in lessons last spring and that girl should have been born a fish! Despite being in the very basic introduction to water tots class (Theo was old enough for the three's class which was awesome because at that point a parent is no longer required or allowed in the water with them for lessons), Vivian can pull herself out of the water at the side, jump in well over her head in water depth, swim several feet to me, then turn back and swim back to the side. The only basic skill she hasn't mastered is blowing bubbles.

Other things Vivian adores are diggers - just excavators and not any other construction equipment. It turns out diggers are underrepresented in the construction category and harder than you think to come across individually. She also loves Thomas, but just Thomas. Not all trains, not all the Thomas the Train characters. Just the original little blue engine.

She still needs "ryba" who is a stuffed glittery clownfish for comfort whole sleeping. Out and about she asks for "froggy" when she needs to soothe herself. Froggy is a small mouse sized stuffed green frog attached to a pacifier. She finds it incredibly soothing to chew on the pacifier part despite never using a pacifier really as an infant. She still likes garbage trucks too but I think that obsession is waning.

Vivian adores her baby brother. She loves to pick out his clothes, help change his diaper, see his poop (a particular favorite of hers), give him kisses, hold him, give him his lovies, and tuck him in under blankets. He's by far the best motivation to gain her cooperation.

Vivian gets fairly frequent time outs for bad behavior. I'd guess about five times a week on average though some days are five times in a day. She gets those mostly for hitting or biting. She tends to hit me no mater who she's mad at, and bites her brother. It's almost always with good cause because she has said "No thanks" to him multiple times and hrs ignored her message. The biting sprung up around two years I think then subsided very quickly. It's made a big comeback in the past two weeks. The hitting is, well, hit or miss. It was almost entirely limited to me even if Theo ticked her off or someone else said no. But during my parents' last visit she smacked Granddaddy once too. She gets two minutes time out then has to agree to stop the behavior and check in with the person she accosted. She will try and escape by running out of the designated time out spot until I put up a baby gate to prevent that. Then she just screeches repeatedly.

When Vivian gets mad, she stays mad. When she wants something, she doesn't often forget about it. But she is also extremely sweet about sharing and participating and helping.
Posted by Sarah at 9:29 PM