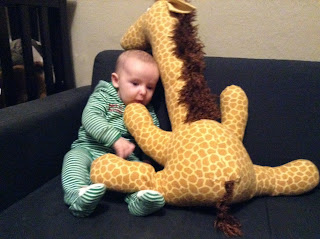 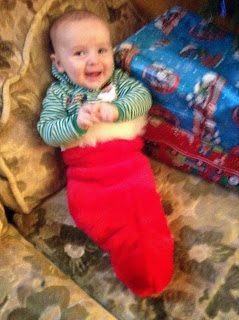 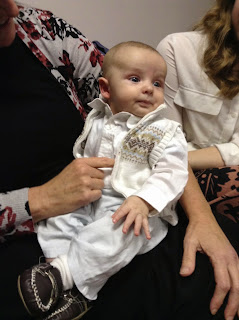 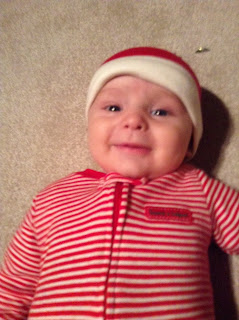 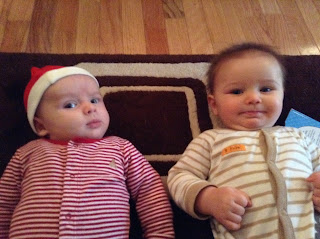 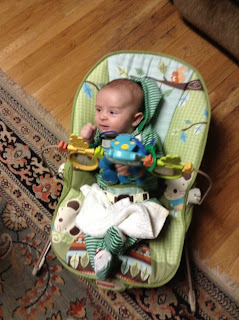 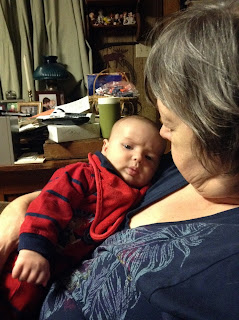 Xavier is three months old! Can you believe it? He's still a nice chunk of change and loves eating and sleeping. He nurses about every two hours during the day though he can go up to three hours between feedings on very rare occasions. He has also learned to take a bottle which is not surprising to me at all even though I waited until well past two months of age to try it. He will suck on anything from his fist to a pacifier to my shoulder or arm. Anytime he encounters bare skin (and lots of the time even when he doesn't), he tries to suck. He probably prefers the bottle as I've noticed a very marked increase in biting when he's nursing. He's more likely to get frustrated waiting for the letdown now, too.

He's nursing up to two hours a day but rarely more than that and sometimes as low as an hour and a half total nursing time in a twenty-four hour period.

At night, even during all of our recent travels (Georgia, DC, Cincinnati), he's been sleeping extremely well. He normally goes at least six hours from when he falls asleep and often it is eight or more hours before he wakes up for his first feeding. He even topped out at nine hours one night! He usually goes back to sleep for two to three hours after that. If he's only sleeping for closer to six hours before the first feeding he often nurses twice more, usually only on one side, before waking up for the day.

He still doesn't cry when he "wakes up" to nurse at night. I know he's hungry because he tosses his head back and forth rapidly looking for a snack and the noise is enough to wake me. He never even opens his eyes but instead just latches on and falls off when he goes back to sleep.

When he wakes up for the day he also doesn't fuss which means, especially at my parents' house, that I have to go check on him regularly to see if he's woken up yet. At home I can often hear him rustling around.

He's sleeping almost entirely in his bassinet or in the small crib when we were in Georgia. He certainly doesn't object to sleeping with me in the big bed and often that's how I get him to fall asleep at night is by lying down with him until he nurses himself into oblivion.

He's definitely a night owl and by the time he beds down for the night I am totally ready to tuck in as well. The biggest roadblock to going to bed together between eleven p.m. and midnight is me putting him down long enough to go get ready for bed myself.

He wakes up smiling and happy about twelve hours later. I felt guilty waking him to take Theo to school four days a week but since we were traveling almost all of the last month that hasn't been much of an issue. He eventually shifted time zones so he was falling asleep at eleven to midnight instead of between one and two. Now that we are back in very dark Seattle, I'm curious to see if he shifts back to west coast time or continues going to bed around 9:30 local time.

Xavier does not cry much at all. On one of our quick trips, I heard him cry only once in two days - except for car rides. He still hates the car, even with a warm blanket and pacifier. He screams bloody murder there. Lucky for us both, courtesy of my mother's satellite radio stations, we discovered he loves blues music more than he hates car rides. Sadly satellite radio doesn't work in the carport, but as soon as we pull out and the blues music comes on, he makes a few more "huh huh huh" grumbly noises and then calms down. After that he's almost always asleep.

Xavier is much more verbal now. He makes "ooo" and "ah" noises no problem and still loves to look at faces and have conversations. He has an excellent sad face as a precursor to crying where his lower lip rolls out and his whole face puckers up.

He is also very ticklish now too and his laugh has evolved from sounding like he might be choking to some quality belly laughs. There's nothing quite like a baby laughing to put a smile on your face. He's ticklish on his collarbone and along his jawline as well as toes and feet in general.

He doesn't have a lot of hair but he has much more than either of his siblings did at this age. All of his hair except a small band at the back of his neck has fallen out. It's come back in on the top in what we call a five o'clock shadow and so far it looks very dark. In fact with his ears and his smile he looks very similar to a photo my mother has on her wall of my grandfather as a baby.

Xavier learned to grasp things during our travels. I ordered a bouncy seat for him since we were staying so long and I wanted somewhere besides the crib or the floor to safely put him. He spent many happy hours in it watching the toys on the bar and waving his hands. By the time we left he could consistently catch the blue elephant we attached to the bar which hung the lowest of the toys. He doesn't realize when he's captured something yet and often lets go very soon after grasping it. He's best at grabbing cloth items but we shall see how that develops.

He loves both the singing light up stuffed puppy he got (In all fairness both the older kids are obsessed with it too. They love to show him and make it sing and light up for him or even just their own entertainments.) and the stuffed gray bear from his auntie. He will talk and smile at the bear fairly indefinitely.

He gets cranky when he is hungry - which is more often than you might think - or sometimes sleepy though that's often the unfortunate nexus of hungry and sleepy. He's rarely awake two hours at a time but if he is he's usually angry. He's still taking a bunch of twenty to forty minute naps during the day with no discernible schedule except how long he's been awake. That's pretty convenient with two older kids, though, one of whom has been mostly done napping on a regular basis since the week of Thanksgiving.

Xavier has outgrown his three to six month clothes and moved solidly into the six month stuff. We don't have any stats this time but he goes back for a check up at the end of the month. In the meantime he's filled out the six month pajamas quite well and I suspect he will move into nine month footed stuff sooner rather than later. He's outgrowing things mostly by length of his legs but occasionally it gets tight on his head too. Tops are more likely to be short in the torso than short on his arms and he's plowing through shoes as well. His feet are definitely bigger than both his siblings at the same age but of course he is too so that makes sense. I suspect his feet are closer to normal size for his age whereas Theo and Vivian both wear much smaller shoe sizes than all of their classmates of the same age or even younger.

Xavier is big enough that when my aunt met him before the holidays, she subsequently returned the six month clothes she had purchased and got him nine months sizes instead. :-)

Xavier is loved and adored by everyone in the family! Vivian can't wait until he gets up in the morning (or afternoon as was often the case when we were on the east coast). She jumps up and down and squeals with joy to see him. She loves to help pick out his clothes, change his diaper, and still holds him multiple times a day. Theo gives him lots of hugs, (very enthusiastic - sometimes too enthusiastic for Xavier) pats, and kisses. None of us can resist his sweet smiles and belly laughs and we look forward to sharing many more with him in the months to come!

Michal adds: My photos are now available after an upload delay. A small sampling: