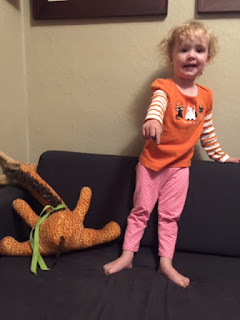 Vivian is three years old! She celebrated her third birthday in style. Vivian's presents, cakes (yes, plural), and party will tell you a lot about our little three year old firecracker.

Vivian, for the first time, mostly with the help of her older brother, has been highly anticipating her birthday. If you ask how old she was going to be you got one of two answers:
"Three." Or
"Fourteen."

Both are probably accurate in terms of her behavior. Her brother wanted her to get all diggers and related objects (rollers, dump trucks, excavators, and any other construction vehicles) for her birthday. She said yes. She also got a child sized umbrella in pink and green and a hot pink baby stroller. These things were not on her brother's approved present list, but she did select them herself - sort of. In a Polish toy store, those are the two items she picked out. She has been asking about them ever since. The umbrella got the best present opening reaction though she didn't get around to actually playing with it until the end of the day.

We did presents first thing in the morning as is our custom. In addition to the things listed above, she got a "new" pink and blue pedal bike. She's almost mastered the balance bike and has been asking for a pedal bike for months. She also got streamers and a green bell to go with the bike.

In the clothing department, she got orange footed digger pajamas, garage truck pajamas (which she has declared clothes and put away in the appropriate drawer with her shirts and pants), a sparkly green tinker bell dress, and a green tinker bell shirt. Her favorite colors are pink and green and she says when she is four and gets her big boy bed, she wants it to be rainbow colored.

Theo wanted to get her a vacuum cleaner, which was a very interesting choice because she is still terrified of both the vacuum and Roomba. She literally shakes while I am holding her and the vacuum is running and has someone turn off Roomba if it starts running while she is home. But when Theo ran the idea by her, she said yes enthusiastically and added a vacuum cleaner to get list of desired birthday presents - a list that was fairly consistent given that she turned three and can change her mind about anything in much less than a minute.


She also got a pink and green wallet, a diaper bag with goodies for her baby, an alphabet construction book, a good night diggers board book, a big digger toy with a removable shovel, wings (she calls them a butterfly), and probably quite a few things I am forgetting because I didn't write them down immediately. The pile looked like this: 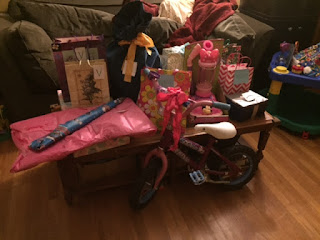 When I asked her what she wanted to do for her birthday, she said she wanted to see fireworks and diggers. I couldn't do much about the fireworks but told her we could watch a video of them. I planned to go see some diggers but it's not exactly something I can look up online. Then we spent the afternoon and early evening throwing up which nixed the idea of going anywhere. Instead we watched two short shows of fireworks and diggers at home after dinner once she had recovered both her energy and appetite. (Luckily no one else got sick.)
Unbeknownst to me, though, it was fireworks night at the baseball stadium. The stadium is only a mile or so from our house so we could hear them very clearly around 9:30 pm after she had gone to bed. I wouldn't have taken her to the game anyway, but if I had realized the coincidence (seriously who asks for fireworks on their birthday and gets them?!?) we probably would've pulled her out of bed to go to the park and watch the show because, well, it was her birthday. After presents, Daddy took her and her older brother to the bakery to get breakfast pastries. She picked a chocolate m&ms cookie and a chocolate covered donut. Lots of other tasty things came home too. While she was there, she saw a pink cake she wanted. We called later in the day and got a smaller version of the pink cake which was already made and they wrote her name on it. It was very tasty - chocolate cake with strawberry between the layers. 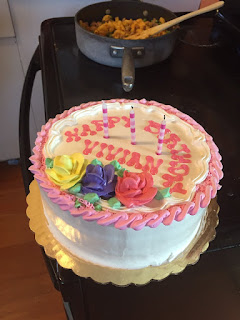 That's her birthday dinner of beefy macaroni and cheese pictured behind it. I wouldn't let her eat much because she had vomited three times in the last couple of hours but she wanted to. She did get to have some cake.  We sang to her and she blew out the candles. Then she asked us to "still sing to her" at her birthday party. Her party was on the weekend and she loved it. She asked specifically for a swimming party so we booked the party package at the community pool where the kids take lessons. She wanted her friends from preschool to attend. Sadly, since it is a school break between spring and summer sessions,  most of the families were out of town. The only other girl in her class was able to come with her older sister and of all the people attending, that's the only friend Vivian interacted with in the pool. We got one hour of swimming time which Vivian adored. She didn't really know the difference between this and the regular public swim times we attend. But although they will book up to three parties in the same time slot, ours was the only one that day. That means we had the pool to ourselves and our friends which was super sweet for the adults. Vivian had thirteen friends (including her siblings) at her party where we served pizza, fruit and veggies in the party room after swimming. We had three balloons tied to her chair, and at one point she started bawling. Turns out the balloons had come untied and floated up to the ceiling. Luckily Daddy was able to snag them with the broom and get them back down. Her cake at the party was marble cake with strawberry filling and pink and green icing to go with the construction decorations. 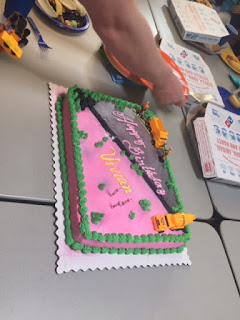 At home, Vivian is a non-stop chatter box who is full of smiles, laughs, and ideas. She loves singing and playing games and has a very active imagination paired with a good memory. She's still a little hazy on the concept of time. After nap is generally a new day for her so she has trouble answering questions at dinner time about things she did that happened prior to nap.
She loves her diggers and garbage trucks. Those things top her favorites list, followed closely by playing with her baby doll. She adores changing the doll's clothes and its wet and poopy diapers. She liked the new baby stroller so much that she took it with her to the bakery on her birthday - even though they drove instead of walking. In the car, she cried because the stroller was "too far away."
Vivian wants to do everything herself and has a huge independent streak. She will take ten minutes climbing out of the car in the afternoons but heaven forbid anyone try to help or rush her. She is not using the potty at all at the moment despite multiple approaches to potty training. In addition, she hates being changed and would much rather stay in a poopy diaper (or as I learned to my dismay, poopy underwear) than endure a changing even on her terms. She sleeps in her clothes at least once a week - more because she is very attached to her favorite clothes than because she is too tired to cooperate with changing into pajamas.
She loves her Thomas the train t shirts best followed closely by her digger shirt. I Susie t the new garbage truck stuff will be adds to the list though at least they are actual pajamas so it makes sense when she sleeps in those. She will wear her favorites until I peel them off her. My general rule is to try not to send her to school wearing the same thing two school days in a row but otherwise I couldn't care.
She loves picking out her clothes when getting dressed and can easily dress (and even diaper) herself. She makes very interesting combinations that I would never even consider but she always manages to pull it off and I'm constantly surprised by how good she looks in the eclectic mix.
Her favorite food is still far and away macaroni and cheese. She would eat it every day for every meal if she could.
When she got a door for her toddler bed, she chose green for the paint color.