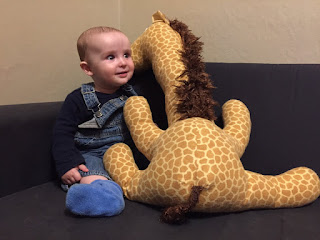 Xavier is eight months old. He's still his charming laid-back self, though a couple of recent additions in the tooth department have made him almost fussy. His sixth tooth us through the gum and his seventh is well on its way, for a grand total of four on top and three on bottom. I suspect there will be more sightings in our near future.

More teeth equals less sleep. Usually Xavier starts getting ready for bed around 7 pm and is actually in the crib by 7:30 or 7:45. He nurses and has a bottle of pumped milk before bedtime. On a good day we also read one or two books, sometimes with one or two siblings present. He gets changed into his pajamas - which requires a size 12 months and even those don't have much room to grow! - and his sleep sack before books and nursing. Essentially we still follow our original adage of change, read, swaddle, feed that began when Theo was an infant. But by this age we use a sleep sack and put it on with the pajamas and fresh cloth diaper.

Naps aren't much different in the routine though he usually needs a fresh diaper after and not before. He's up for the day anywhere between 6 a.m. and 7:30, often depending on the noise level generated by his older siblings. His first nap starts between nine and ten - closer to ten on Tuesdays, Wednesdays, and Thursdays when Theo needs to be dropped off at school at 9:30 a.m. Afternoon naps are around 2, but later on Tuesdays and Thursdays (Tuesdays and Fridays for our new summer schedule which starts June 3) when Vivian gets picked up from school at 2. An hour and ten minutes is a standard nap length these days though much shorter and up to three hours are possible.

If we are out and about near nap time and he falls asleep, he sleeps 35 minutes and is done until the next nap or bedtime.

He generally poops once a day quite regularly. He's eating like a champ and it shows. He loves to feed himself. We've discovered the baby poofs made in star shapes flavored with peach and sweet potato and those are hugely popular. He also loves o's, mum mum rice crisps, buttered toast, pasta, peas, and just about any other finger food we can come up with to give him, including pizza crusts. It's amazing what he can chow down on with not quite seven teeth.

For spoon fed foods, he's not as keen on those as he is on feeding himself. In the morning he had yogurt or cottage cheese mixed with sweet potato or mango. At lunch it's either avocado or a squash or potato mixed with pear. And dinner is almost always baby cereal - either rice or oatmeal. The only food better than rice cereal is oatmeal cereal. In the evenings he can put away 12-16 oz of that stuff in one sitting, not including any water he drinks or finger foods he consumes.

Xavier is nursing about five times a day and twice overnight. He can go five to six hours until the first feeding sometime between 1 and 2 a.m. The second feeding is anywhere from 4 to 6 a.m. and on a bad night he will squish in another feeding or even two extra. He goes back to sleep on his own and spends all his non-nursing time in his own crib - which I still haven't lowered.

That's because he is not sitting up yet. He can sit supported just fine but could certainly not get himself into a sitting position and is never leave him seated even on the floor. He will topple over.

He has gotten very good at sliding around on his belly, however. He can get his belly part way off the floor and go backwards and spin in both directions. It's definitely not the most direct route but he usually gets to what he wants these days. His biggest problem is when he gets stuck under the furniture or straddling furniture legs.

He still plays in the exersaucer but likes the freedom to move around more. His favorite toys are anything he can gnaw. He's mostly lost interest in the baby toys in favor of blocks, duplos, train tracks, magnet tiles, and whatever else graces the floor courtesy of two older siblings.

Theo loves to build him creations to crash out of magnet tiles and play ball catch which is rolling the ball back and forth. Xavier loves Theo so all of that is very entertaining for him. He laughs whenever he manages to catch a ball.

Vivian loves Xavier. Nearly every day she says "Xavier is part of our family." and "Xavier loves me." She loves to help change his diaper in the hopes that every one of them is stinky. She likes to feed him, pick out his clothes, bring him toys, choose his toys, and just about anything else you can think of related to her baby brother. Xavier loves watching her and interacting with all the hugs and kisses from both kids. He now likes to grab hair and Theo regularly offers up his head for grabbing. Xavier will also stick his fingers in Vivian's mouth.
Posted by Sarah at 9:01 PM