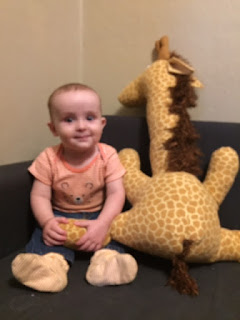 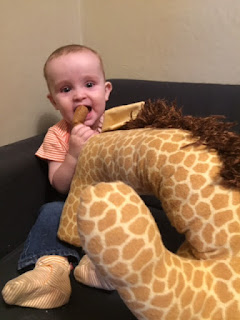 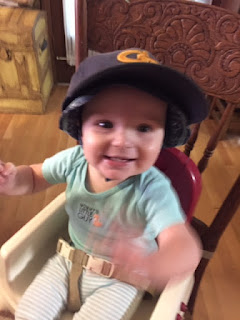 Xavier is ten months old! Wow-wee! He hasn't changed much in the past month, but he has definitely gotten faster getting around. He's still dragging himself around army crawl style on one elbow and one hand. He kicks his legs and feet it doesn't get up on his knees or get his belly off the floor. As a result, our floors are much cleaner and his clothes collect a lot more grimy stains. Light-colored stuff is not our friend.

In the last two weeks, particularly at Grandma's house where there are many horizontal bars in low reach, Xavier had been pulling himself up. He's not getting into his feet or even his knees. He uses brute force to drag himself into a chin up and clear the ground with his belly then let's himself back down.

He's gotten better at sitting up as well. While I still wouldn't be out of reach when he's sitting upright (yesterday I was right beside him and he still face-planted while trying to transition from sitting to his belly), he can sit for much longer periods of time. Instead of flipping over or backwards immediately, he slowly puts him palms out flat and tries to lower himself down. His feet often get in the way so it's a far from perfect method. But it's definite progress. In fact during his last bath, he sat upright unassisted for longer than he spent splashing around on his belly.

Boy does he love the water! We got to go swimming three times in outdoor pools during our trip to Grandma's house. He is so happy splashing and kicking and moving around in the water. It's so much fun to watch.

He also still loves stripes and buckles and peekaboo is his favorite game. His favorite color is red and he loves doors that open or close - big ones, little ones, doesn't matter.

Xavier is super sociable and although he's getting some separation anxiety, he doesn't really meet a stranger. He was quite happy being passed among relatives he hadn't seen in six months or more with nary a complaint. He smiles at people then hides his head in my shoulder then peeks out smiling again. And if you have food, he's your new best friend. That kid loves to eat.

Xavier has a confirmed peanut allergy that's severe enough we are required to have an epipen with us at all times. He also has possible allergies to walnuts and pecans. That hasn't slowed him down any though, and the good news is he isn't allergic to hazelnuts. (Yay for Nutella!) We've added beans, which are a huge hit, blueberries, beef, strawberries, turkey, eggs, and raspberries to his diet. There aren't many other things left to introduce to him, but he still loves baby cereal. He can eat three to four bowls of it. He's a big fan of puréed vegetables and fruit mixes as well, though he eats so many ounces in a sitting (10-12 if not more) that I have trouble keeping the supply of mushed food in stock. Applesauce and yogurt are go-to foods because they come already in the correct consistency for spoon feeding.

I'm feeding him solids four times a day now - three meals, which consist of puréed solids and finger foods, as well as one snack in the afternoon. Snack is almost always finger foods like beans or fruit flavored puffs or goldfish and the like.

You wouldn't be able to tell how much he loves to eat by his weight however. We had a follow up visit with the doctor to check his weight and gross motor skill development. Xavier tipped the scales at 20 lb 9 oz. That's up from 19 lbs 11 oz at his nine month visit. But it's not much change from 20 lb 6 oz, which is what he weighed the very next day when we went in for his peanut allergic reaction. He is smack in the middle of the percentiles in weight on both CDC and WHO charts.

He's 30 inches tall, which keeps him in the 90th percentiles on both charts. That's a quarter inch taller in the last month (though the allergist measured him in the drawing two lines and using a tape measure manner and he was 30.5 inches at the beginning of the month). It would be nice to have some consistency among measurements. At the pediatrician for the allergic reaction visit, they weighed him in his diaper and got 20 lbs 14 oz so it looks like he's lost weight since then. I re-weighed him naked that day to have more accurate records and I'm glad for it.

Otherwise the only other big thing right now is sleep. Xavier takes two naps and has no trouble falling asleep at either time. The morning nap is around 9:30 most days and the afternoon nap starts between 2 and 2:30 depending on if I have to pick his sister up from school that day or not. He sleeps about an hour and a half both times with no wakings, sometimes as long as three hours in the afternoon.

He does not nap if we are out and about. During our trip he could go six hours even if we spent an hour or more driving. It was impressive in a scary kind of way. But at home with the white noise machine and the dark he goes right to sleep after three hours of awake time.

At night, it's totally hit or miss. He just did four nights in a row where he didn't nurse for more than eight hours. Since bedtime is around 7:30, that gets us to 3 am or so. Then he usually nurses again 2-3 hours later around 5. He might wake up before the first feeding, but he fusses only a bit and goes right back to sleep with zero interventions.

That's a great night. Then there are the not great nights. On those nights, he wakes up after only 3-4 hours and can't get back to sleep and stay asleep for sometimes as long as two hours. He falls asleep and quiets down repeatedly for seven, eleven, maybe even twenty minutes but wakes screaming again. He will calm down if I pet his head, or pick him up and rock him a bit. Sometimes that's enough to get him sleeping again. Sometimes the only thing that works is nursing. After the first waking on those nights, he's generally awake every hour and a half and I'm so out of it I nurse him. Often he ends up crashing the rest of the night in the bed with me as a result though it isn't intentional. Otherwise he's in the crib on his own for the entire night.

I can't detect any pattern or reasoning to determine ahead of time if it will be good night or not. I thought it might be if he had good naps during the day. Then I thought maybe he wasn't eating enough during the day. Taking care of both those things didn't make it any more predictable.

Here's to hoping for more good nights and fewer rough ones in between.
Posted by Sarah at 10:03 AM