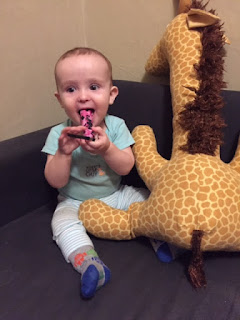 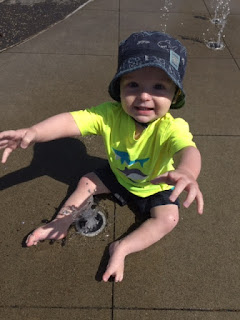 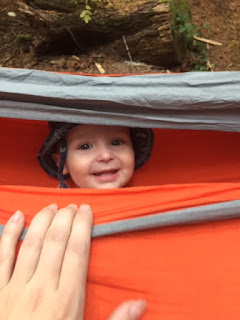 Xavier is eleven months old! I know I say it every month, but this month in particular it seems so crazy that he will be one in a month and no longer a baby!

Xavier still loves to eat. He consumes four meals a day these days starting with breakfast around 8 a.m. That's usually oatmeal or rice and whatever finger food is handy. He loves oatmeal baby food cereal in particular. In fact he's our first kid to eat processed baby food cereal. The others wouldn't think of letting it past their lips.

Lunch is around 12:30 though often Xavier is starving by noon. He has lots of veggies or fruit cubes if we are home. Out and about he has baby food pouches. He won't eat the meat pouches and only occasionally shows interest in deli meat. He loves beans though and eats them as fast as he can shovel them in. He's okay with cheese but it's far from guaranteed and with nuts off the menu, most of his protein and fat calories come from yogurt.

He has a snack around 4 or 4:30 after his afternoon nap. That's almost always finger foods whether it's goldfish or snap pea crisps or buttered toast cut into strips. During our travels we got him done veggie puff baby finger food and he can eat the entire container of those in one sitting if we would let him.

Dinner is still Xavier's biggest meal of the day. It seems the later in the day it gets, the hungrier he is. He often has little interest in breakfast which is why we made that meal consist of his favorite food. When we feed him baby cereal at dinner he easily ate three or four bowls at a time. Now he usually had yogurt mixed with applesauce or a mashed banana. I've upgraded to the largest plastic kid bowl we have at dinner and it's rare he doesn't finish it all.

Xavier also loves finger food. He's almost to the point he prefers to feed himself. He's earned to suck from a pouch now instead of spoon feeding him. I have the most success spoon feeding if he has something else to entertain him - whether that's watching the show his siblings are always putting on or having something like a spoon or cup to manipulate with his hands. As soon as he's busy he opens his mouth like a little bird and lets me shovel it in.

He loves drinking water from a sippy cup with no valve or an open cup at mealtimes. Depending on what's he's eating, he needs the water to wash the food down. Since it had no calories I try to keep him from more than a few ounces but I'm considering offering him whole milk at mealtimes instead.

Xavier is nursing four to five times a day these days. He nurses as soon as he wakes up in the morning which is usually between six and seven. He can lay in the bed nursing/soothing for a solid hours a lot of the time. He nurses again before his first nap around 9:30 or 10. He has a third nursing session before his afternoon nap which is supposed to be around 2 p.m. but they really depends on if we have managed to leave the house or not.

He nurses and takes a bottle of breast milk or formula at bedtime which starts around seven p.m. Our giant stash of pumped milk, which took up an entire shelf of the stand alone freezer, is down to just a few remaining bags (though we did donate quite a few ounces). Coupled with all our recent travel, and he's been taking formula no problem as well. He generally has four ounces at bedtime after nursing and I've added a second two ounce bottle in the morning before his first nap as well.

Overnight Xavier is down to one nursing session usually around 4 (ranging from 3:30 to 4:30 most nights). Despite that, sleep is still totally hit or miss around here. He generally has an excellent night and sleeps straight through to that one feeding for about eight consecutive hours. On those nights he wakes up to feed again about two hours later before getting up for the day around seven something.

The alternative is much uglier and totally unpredictable. In these cases, he wakes up three to four hours after bedtime screaming. He will fall back asleep totally on his own after a few minutes, then wake up six or seven minutes later screaming again. Eventually after half an hour or so of this, I pick him up and put him on my shoulder. He squirms for thirty seconds or so, sighs, and passes out. Then I put him back in the crib and he sleeps an hour and a half to two hours before we repeat the whole process over again. At three or sometimes much earlier I nurse him and get him back on the crib but it's still every hour to two hours waking up and crying.

He doesn't cry much during the day though he does fuss now. He doesn't like going into his room if he thinks I'm going to put him to bed and he always cries for a couple minutes after I put him in the crib. But he has no trouble falling asleep and has very consistent naps at an hour and roughly ten minutes both in the morning and afternoon.

Xavier is getting around very fast these days. He's definitely still doing the army crawl with one hand and one elbow to wrist pulling him along. But I often see him getting his bell off the ground and he kicks his legs like a busy little frog. I've even seen him get up on all fours and rock back and forth a couple of times.

His biggest new move is getting up on his knees by pulling himself up on anything he can reach. He's mastered tucking his knees under him now and once he's up on them, he can let go with one hand and reach out for things. He can get pretty much anything he wants off the coffee table these days and can even reach the edges of the sofas.

Xavier loves to pull up on the handles of the toy kitchen and rummage through there. His favorite thing is the red dish washing brush the kids have. It has a suction cup on one end that is apparently just right for chewing. He still loves the color red.

He's completely obsessed with his lovey, which is a taggie blanket. He might sleep without it, but I'd hate to try nursing him or giving him a bottle without it for him to fiddle. He fingers the tags and loves on it so much.

He's very good with his fine motor skills and likes taking something out of a container and putting it back in again.

As for chewing, his eight tooth finally made an appearance! He's been sporting four on top and three on bottom for three months now with no new teeth. Now he has a matched set of four on bottom and top.

Xavier loves playing peekaboo and can hide himself under a napkin or blanket or anything else and peek out. He also loves tickles and the "I'm going to get you!" game. He's so cheerful and mellow pretty much all the time. He's perfectly content to sit in the stroller for two to three hours while we are out and about keeping the other two entertained. Even if the stroller is parked, not moving, it's extremely rare for him to complain.

He loves to swing and has outgrown the exersaucer because he is big enough ( both height and weight) to just lean over in it and pick up whatever he wants. We've retired that piece of equipment for sure. We don't go too many places where he can get out and roam because his army crawl isn't comparable with concrete and I don't relish the idea of him cleaning any floors in public spaces. But he doesn't seem bothered in the least by that or much of anything else.

He still loves to smile and grin at people though he has a bit of separation anxiety now if I hand him off to someone. Overall he's this charming mellow guy and we can't wait to celebrate his big day with him next month!
Posted by Sarah at 3:48 PM