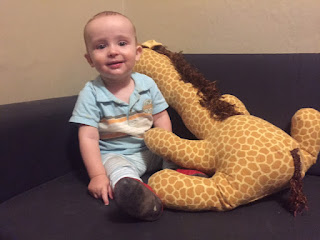 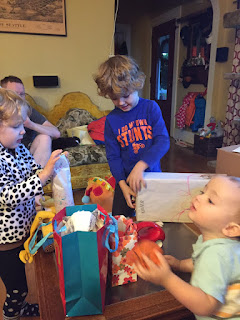 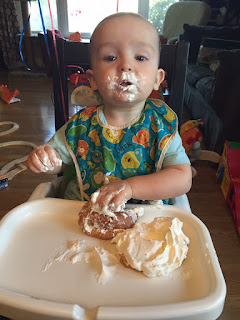 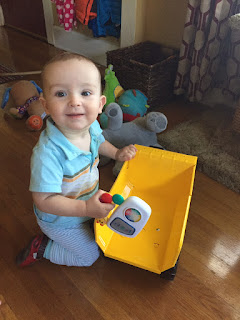 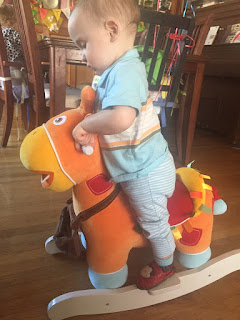 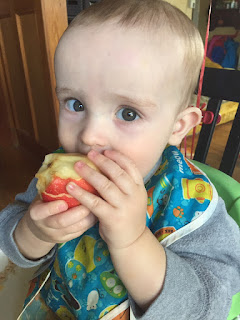 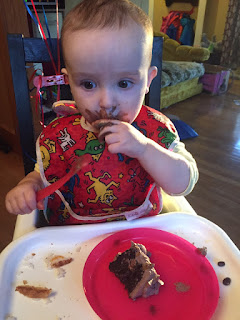 Xavier turned one last week! We celebrated his big first birthday in several ways. First, as is our custom, we got him balloons and tied them to his chair at the table so they would be obvious as soon as he woke up and went into the dining room. He had a first birthday balloon in baby blue (the only color they had), a red happy birthday balloon, and a new kind of ball shaped mylar balloon with Mickey and friends on a clear background. He very much enjoys batting at the balloons and watching them spring back and bounce around.

We laid his presents out on the coffee table and had several things set aside in separate places for his older siblings. Xavier was singularly unimpressed with the concept of gifts. I thought he would be interested in taking things out of bags and boxes as he likes putting things in and taking toys out of containers very much now. But he looked at all the stuff and moved right along.

Earlier in the week I had taken Theo and Vivian to the toy store and let them pick out presents for Xavier. Vivian in particular debated long and hard but settled on a red water bottle with a rocket ship on it for him. She had gone on hoping to find a red dish, though there was a surprising lack of red toys suitable for toddlers. Theo of course wanted to get Xavier a train, though once we got to the store and there was an actual train table set up to play with, he couldn't care less about shopping for presents. After he ran out of time at the train tracks, he got serious about selecting a gift. He stumbled across a brio train starter set marked for ages one and a half (instead of the usual three plus) and we were all set. Theo got Xavier his own track so he would stop messing up Theo's creations.

Back at home the kids decorated some packing paper and wrapped their gifts. So on the actual day, they were both super excited to "help" Xavier unwrap the gifts they had chosen for him. Theo then proceeded to help him unwrap everything else.

Because it was a school day for Theo, we had to rush a bit. After presents we took all three kids to the local bakery to select breakfast goodies. Xavier got a cream puff, and Theo and Vivian both selected cupcakes. We lit the one birthday candle and sang to him. Xavier was intrigued by the fire on the candle but had no idea about blowing it out. He did enjoy the cream puff though. He ate mostly the cream parts until I broke off some smaller pieces of the bread for him. It was large, though, and difficult for him to manage on his own.

Xavier has been pulling up to a standing position for about three weeks before his birthday and he's very stable on his feet. He's also remarkably good at getting back down to his knees and then his belly so he can army crawl around the house. So he was at the perfect height to reach presents on the coffee table despite his lack of interest.

He got the gifts from his siblings as well as a wilk (flat wolf lovie), a zutano blanket with a forest friends theme, a big yellow dump truck, a rocking horse (which is actually a giraffe) that talks and sings, a red car, a stuffed badger, a small red barn toy with wooden doors that open and close, a new shirt and jacket, a remote control car that makes music and noise, and a waterproof octopus with three rings that can be hooked onto its legs.

Xavier is still napping twice a day, so by the time we dropped Theo off at school and returned home, he didn't have any time to enjoy his new things. He went straight to nap. When he woke up, I fed him cheese quesadilla for lunch as that's by far his favorite food right now. He's willing to sign more for quesadilla but not for anything else. I've also started giving him a sippy cup with whole milk in it at meals and he likes that a lot. I think the cup is just as intriguing to him as the contents though. He's mostly mastered the art of tipping it up to get milk out.

He also loved the sloppy joe we had for dinner one night and is still a big fan of beans. He likes cheese more than he used to, and loves to have an entire apple to chew on. Watermelon is definitely one of his favorite foods followed closely by blueberries.

He's not quite cruising along the furniture yet but has enough upper body strength he can pull himself up onto the coffee table if he wants. He still loves to play "ball catch" which is just Theo's way of saying roll a ball back and forth while sitting on the floor.

Xavier's still nursing about four times a day (upon waking in the morning, before both naps, and at bedtime) but gets formula or breast milk in a bottle after three of those sessions as well. He generally has about 24 ounces of supplemental fluids from the bottle per day. If he's nursing I give him four ounces. When I'm not available, he gets six ounces in the bottle and generally empties the bottle.

He's eating three solid meals and an afternoon snack. He loves these Gerber baby vegetable flavored poofs we discovered during our recent trip to Massachusetts. He would eat the entire container if allowed.

Sadly both Michal and I had a meeting we didn't feel comfortable skipping the evening of Xavier's big day. I left him a container of the veggie poofs with the sitter and let him gorge.

To make up for the birthday dinner we normally do, we invited friends over for Sunday evening. Oliver (3.5 and one of Theo's best buddies) and his sister Pearl (exactly a month older than Xavier) came over after to nap to play and have dinner. They brought Xavier a new touch and feel book which he loves, though I have since been unable to locate it. (I suspect older siblings in this disappearance.) Then we had a birthday dinner of steak with tomatillo salsa, black beans and rice, and cheese turkey dogs for the kids. Xavier ate his half a hot dog and rice and beans and Theo devoured five hot dogs!!!

We followed dinner with a small chocolate cake with raspberry filling and chocolate frosting with raspberries and chocolate swirls on top. It was about the size of a bocce ball with two layers and split amongst us all quite nicely. We put a blue candle in and sang to him again and then let him at the cake.

Xavier is still hit or miss on sleeping at night. We haven't had his twelve month check up yet because I scheduled it simultaneously with Theo's five year check up. But I suspect Xavier has a mild to moderate case of sleep apnea since most of the advice for that condition (colder air, inclined surfaces, side sleeping position) seem to result in much better nights for him. On a good night he's up around four a.m. and several times in the last month he's gone ten and a half to eleven hours straight. He's usually in bed by 7:20 something though now that he's pulling up he sometimes spends time playing before settling down to sleep. He likes to throw things overboard but doesn't fall asleep well without his favorite Taggie brand lovie, which is a small pale green (well it used to be pale green - now that he's dragged it along the floor multiple times it's closer to a dirty gray color) fuzzy blanket with ribbon tags sewn around all four edges.

Xavier loves airplanes. It's the only thing he signs for consistently. When we are outside, whenever he hears one, he swivels his head and signs until he spies it. He recently discovered that on clear days he can see them from inside the house at the big front picture window and I think that rocked his world. He stayed standing by the window watching and signing for quite a while.

He's still the happy go lucky guy who gets so excited to see all of his family members when they come back. Whether we've just been in the other room or gone all day, he kicks his legs and grins and hustles over with his army crawl to greet us. He still pats my back when he wants me to pat his back for comfort and it's pretty much the sweetest thing ever. He's got that big toothy grin with eight teeth in the front and at least one tooth coming in further back. His smile is enough to light up any room and strangers often stop us outside when we are walking to comment on what a happy baby he is.

He's growing up so fast and we are blessed to have Xavier as part of our family and to celebrate his first birthday together!
Posted by Sarah at 12:24 PM