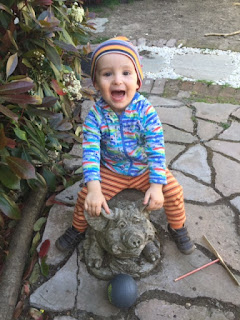 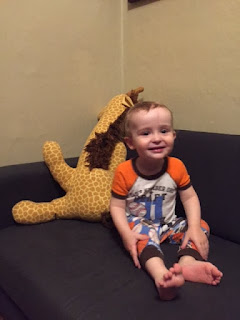 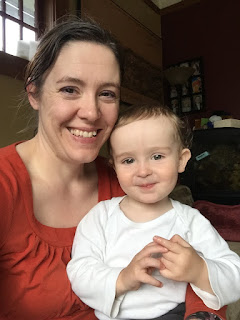 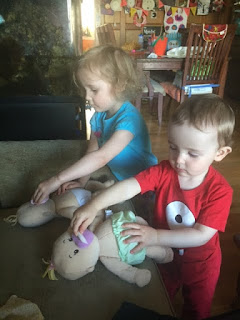 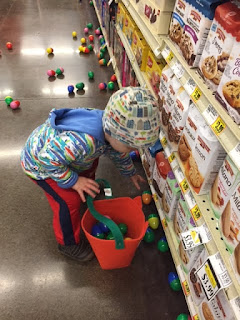 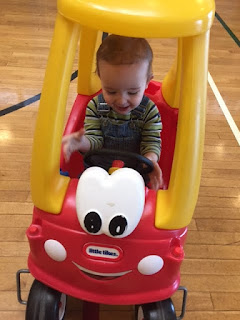 Xavier is a year and a half old! He's such a charmer.

Xavier is obsessed with balls, footballs in particular, but any kind will do. He will throw them and chase them, and if there's no one else around he will do those things all by himself and laugh and laugh. It's super entertaining to watch.

He loves vehicles and things that go. The little chuck the truck fire truck (wee ooo wee ooo) is his second favorite toy. The first is his taggie lovie, which he absolutely can't live without. He will fiddle the tags, rubbing them between his fingers endlessly. He's clearly identified the actual tag because it's already in tatters.

He likes to drive wooden trains down the hills and watch them roll and push them through tunnels. If we ever had a circular track, he would sit in the middle of it and push the train around and around for hours.

Xavier eats four to five times a day. He starts off with breakfast between 7:30 and 8. The start time depends largely on how long he lays in bed with me nursing after he wakes up in the morning. That's usually at least half an hour and often more. He will ask to nurse before nap or bed but those are much more flexible, and I'm not certain he will ask each time. Because our afternoons are crunched trying to get home to get to nap, I often skip the afternoon nursing sessions because it draws out the nap time routine a lot.

For breakfast he mostly wants to eat what the other kids are having, but he does enjoy frozen waffles, honey, blueberries and strawberries, and feeding himself yogurt - which is down to only a moderate mess but definitely still requires a bib or outfit change.

He takes a soft spout sippy cup of milk before nap, typically the full six ounces. His next meal is lunch after he gets up. It's usually cheese quesadilla or macaroni and cheese. Cheese quesadilla used to be the favorite by far but now macaroni and cheese has pulled ahead. He often a eats leftovers too, especially as I've increased my efforts to get more protein into him. (I never cook meat at breakfast or lunch. Heck who are we kidding? I never cook for either meal unless you count heating water, which I do not.)

We pick up his sister at 2 three days a week, and his brother at 3 five days a week, so afternoon snack usually happens in the car. It's almost always goldfish or baby food pouches (which all three kids eat) because I can stash them in the car and not worrying about them going bad or getting smelly. I throw food at them for the seven minute drive home, and they are all tired and cranky so they gobble it up, usually before we are halfway home.

There's more milk to be had before afternoon nap, which ideally starts before 3:30 but depending on how the day is going could be later. He typically sleeps an hour and ten minutes at nap, with an hour and five minutes on the short side and an hour and a half being a long nap. :-)

Dinner is around six and except for nuts, Xavier eats whatever we are having. He is most interested at any meal in eating off someone else's plate, even if the exact same food is in front of him.

He's still sitting in his booster seat with tray, though we just moved him from the end of the table to the side. So now we are much less likely to put the tray on and he eats for the table often, which he loves because that's what everyone else does.

Xavier is most likely to use his signs at mealtimes (or during meal prep when he is often in the kitchen underfoot begging for scraps). He can sign for milk, drink, eat, water, fish (as in goldfish), cheese, more and all done. Outside of the dining room he can sign for book, ball, and hi and bye. Of course he can actually say all those things too, so that helps a lot. Otherwise his communication is limited to pointing and grunting, unless he's playing with trains or cars. Then he makes super cute vrooming type noises and can also say "car" and "truck" though even I am hard pressed to tell the difference between those two words. He will also "read" to himself, babbling and flipping pages.

His favorite book is a picture book called Farm. There's one page with three chickens on it and he's obsessed with that page of "boc bocs." He can pretty much say anything that starts with a b, like box and ball and bird and book and boc boc. The only books that can compete are the Thomas the Train look and find book (which has Thomas and chickens!) and any book with a ball which he can find and name incessantly.

Xavier sleeps ten to eleven hours at night, which is awesome given his obstructive sleep apnea. To get that amount, his bed needs to be propped up at an angle and have a humidifier running. He's still napping in our room in his crib but since Vivian vacated her toddler bed more than a month ago, we put the crib side back on that and moved him into the kids' room overnight. So far everyone is still thrilled with that arrangement.

Xavier is also still on nasal steroids to reduce size of adenoids, but the good news is that so far we've managed to avoid surgery. He stays on the meds for another month. After that, we wean him off and see what happens.

Xavier started walking at fifteen months and a week old, just in time for the new year. We were visiting friends and their son, who's a few months older, was walking. So Xavier set off across their kitchen like a pro. Now he's running around in circles without pause. He loves to grab some random toy from his siblings and run screaming back to me to rescue him as they chase after him yelling. He can go up stairs on his own on all fours, or with a hand or handrail, and down as well. I wouldn't be out of reach near stairs yet though. He can climb with the best of them. He can do almost any steps at the playground and loves to go down the slide. Until very recently he's been good about going down feet first on his belly. But in the last ten days he's started going down sitting up. That's not a problem unless he's on the big kid equipment where the slides can be more than ten feet up at the top and I can't reach him. And he can fly up the stairs on all fours so it's hard to catch him on his way up.

He still loves swinging at the playground and riding just about anything. He's equally happy going for an hour long walk in the stroller as he is to get out and explore. He absolutely loves to pick flowers, and he cannot resist any rock. He has a pile of rocks at every door in our house where I make him park them when we come inside, and now there's a pile in the car too.

He moves the little green stool around the house, particularly in the kitchen, and climbs up to reach pretty much whatever he wants. He loves to climb up in the bathroom to the sink and has been doing that for months. He is addicted to brushing his teeth, even without toothpaste, and will do it five times a day given the opportunity.

He has a mouth full of teeth - sixteen at last count since all his canines have come in.

He wants to do whatever his siblings are doing, and what's more, he can usually do it surprisingly well. His sister rode a three wheel scooter at the tot gym the other day. So as soon as she got off, he hopped on and had a go at pushing himself along. It wasn't a huge success so he just walked straddling it and called it good. He also loves doing art, whether it's markers or stickers or stamps - whatever the other kids are doing.

By far one of his favorite things to do is to ride in a toddler car. Anything will do but his favorite are the kind with a roof and a door that opens and closes. He will get in and out and go back and forth between them if more than one is available. He cries when we leave his sister's school, where they have four of those cars and I am known for going to pick up early so he has time to ride.

He loves his ball pajamas, so much so that we took his eighteen month giraffe photos in them. They have footballs, baseballs, soccer balls, and basketballs all over the pants. He's so pleased every morning when I take off his sleep sack to see all those balls. And in the evenings he asks for them by signing and saying "ball" when I change him into pajamas.

Xavier was very very into hunting and gathering Easter eggs or filling any container. He would hunt and find eggs long after the other two quit and sat down to eat the candy. He likes the candy too, for sure, but for him it was all about hunting and collecting. He often raids the dresser drawers and puts clean clothes in the dirty laundry bin. Luckily I can tell which socks are clean because they are still rolled together.

Overall Xavier is such a fun character with an infectious laugh and irresistible cuddles. His sister can't get enough of him, and loves to hug and kiss him as well as help him with his shoes or anything else. He loves her baby doll so much that I finally got him one of his own, and he is so sweet with it. He's fascinated with the magnetic pacifier but also cuddles his baby frequently and loves to push it around in the baby stroller.