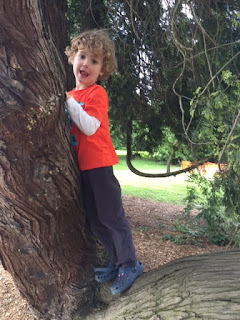 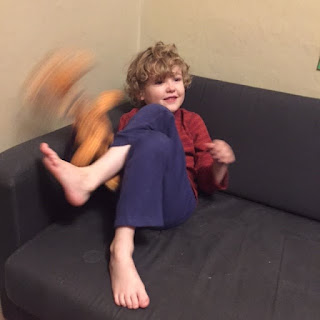 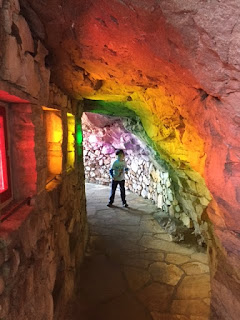 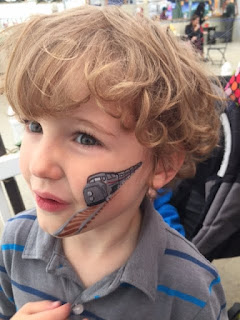 Theo loves school. He is officially in a kindergarten spot nearby in a classroom that is mixed between pre-K and kindergarten. He absolutely adores his teacher and the feeling seems to be mutual. He's made loads of friends there and most mornings, he waits outside on the porch while we finish getting ready to. He likes to be the first to arrive and quite often asks to stay for an extra three hours after the official six hour school day ends. The school studies based on units and he's been very interested in the subjects as they are presented. He also very much enjoys the field trips which range from skiing to theater productions and releasing the salmon the school has raised from eggs.

At five and a half, Theo has finally dropped his nap for good. He will still occasionally pass out unexpectedly in the car or maybe once a month in the afternoons, but overall he's going all the time for the full day and doesn't like to slow down. He goes to bed around 7:30 or 8 and wakes up around 6:15 most days. He's been sleeping overnight in the nook in his sleeping bag since March when we got back from our long weekend trip. He still sleeps with jez every night in addition to other lovies.

At home, Theo is most interested in building things. His number one request is to build a new wooden train track. He will start the new layout by lining up his stations with straight track on either side and splitters to make multiple sidings or a yard. Then it's my job to connect them all somehow with various other attributes included, like crossings or tunnels. He likes building houses with Legos and magnetic tiles as well and will often accessorize his wooden track with structures made from other materials.

Outside the house he's totally still obsessed with trains. He loves seeing them, crossing train tracks, riding on any kind from a trolley or streetcar to a full-blooded passenger train, and reading in depth books on the subject. He wants to be an Union Pacific driver when he grows up.

His favorite meal is cheese tortellini and peas in pesto sauce. He asks for it regularly, though he also loves cereal, and yogurt and bananas. Lately at restaurants he's been asking for hot dogs over macaroni and cheese or chicken nuggets but I never know. He won't eat a cheese quesadilla but loves tortilla and cheese served separately. He likes mayo and cheese sandwiches best for his packed lunches. And fruit bunnies. Fruit bunnies never go out of style it would seem.

Theo loves to tell knock knock jokes though he hasn't quite perfected the humor portion. The best one yet has been like so:
Knock knock. Who's there? Horned goat. Horned goat who? Honk honk coming through. But it's a vast leap from his previous jokes, for which the answer to who's there was always "ketchup."

Theo is reluctantly learning to read and ride a bike, mostly because those have been major focuses at school this spring. He has little interest in reading to himself when we can read to him. And he loves the trailer bike where he's attached behind one of the adult bikes but doesn't have to do any of the work.

He still has massive meltdowns. Most often the cause is not getting his way, and when he's upset or injured it's impossible to tell the difference between a slight injury and say, falling out of a tree. He's definitely got a future in drama if he so chooses, but lately he's gotten really good at naming more obscure feelings like shy and left out.

Theo is still mesmerized by anything electronic, particularly kindle. He watches a lot of train based documentaries along with a smattering of cartoon shows. Nemo is a popular movie as well as shorter shows like Postman Pat. He also loves the game crossy road, and several games like dots and bejeweled on my phone.

In the case of art, Theo's most interested in things like mazes and dot to dot activities. He does like to draw or stamp or color on occasional but those activities are not a huge draw for him.

He finished two sessions of ski lessons and can now ski down green (and blue?) runs unaided. But he's also declared he's done with ski lessons, which is true since the season is over, though he means that he won't take any next year either. He's decent enough in the water that I don't worry about him drowning but I doubt he could swim across a pool that was over his head, and like most things, including dressing himself, that require independence, he shows zero interest in gaining that ability.

He's very charismatic and interacts well wth both kids and adults. He appears to be very popular at school and the kids flock to him when he arrives and ask him to join their games and activities. We love our special Thursday afternoons where I walk down to school to pick him up and just the two of us take the bus and the train home. We usually stop on the way for a smoothie and macaroons and often pick up old friends at the co-op preschool to bring home for a play date. Imaginary games like pretending to be chickens and chase oriented things like hide and seek are popular when the kids are at our house.

What the heck is one of his favorite sayings now and it's super fun to hear how his mind works. "Ireland is in Georgia because it's in the Atlanta Ocean." He and his brain are going places at paces I can't begin to fathom and it's a complete joy to watch him grow and develop his own personality and interests.
Posted by Sarah at 8:53 PM