Every five years I ride the STP (here's the blog post about the 2011 ride, and here are the photos from 2006 which predate this blog!), which put this year as the year to do it. There's nothing new to say about the ride itself that wasn't said in 2011. The biggest differences are in the technology (you can see in the 2011 blog post that EveryTrail is pretty much kaput) and in the approach to training. This year I rode three training rides, pulling Vivian behind me on a trailer bike.

On June 19, I rode 40 miles of the Burke-Gilman trail with her, took her home on the light rail from the UW when her hands were getting blisters.

After I took Vivian home, I rode the light rail back to finish 15 more miles along the "missing link" and the terminal 91 bike trail through downtown to SODO.

On June 26, I rode the Green River trail with Vivian on the trailer bike behind me:

Finally on July 3rd I took Vivian on the Chief Sealth Trail. This ride was a disaster; not only did it rain a tiny bit but I also fell over, which means Vivian fell over. Fortunately she was fine; I suffered a nasty gash to the back of my leg.

Training for the STP isn't my forte apparently; I hoped that removing Vivian and the trailer bike would save me lots of weight and make the STP itself doable; Vivian weighs around 30 pounds which is roughly how much the trailer bike weighs. Fortunately this theory proved largely correct; between the ability to join pacelines and draft and the reduced weight, I did quite fine on the STP. Notably this was the first year I did the STP on a road bike; previously I had done it on my mountain bike but two bike shops refused to work on it on account of a bent fork and I decided it was time to switch bikes.

Here are some select photos from the trip, or check out all the photos on Google Photos.

The journey starts in the UW parking lot, loading bags onto trucks. You have to commit to your destination at this point, as you need to put your bags on the truck that goes to your overnight spot. 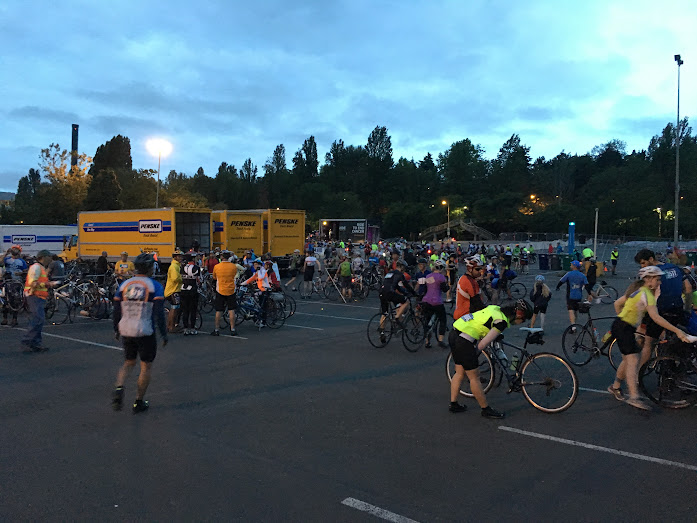 There are official photographers along the route, and this year they happened to get 34 images of me, so for the first time ever I splurged on photos like this one: 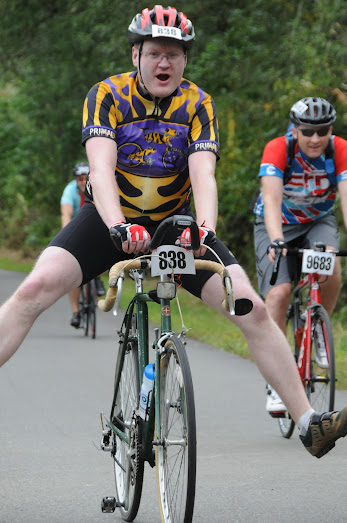 Here's a photo of me at Centralia, where a majority of folks stop (but 22-ish miles short of Winlock): 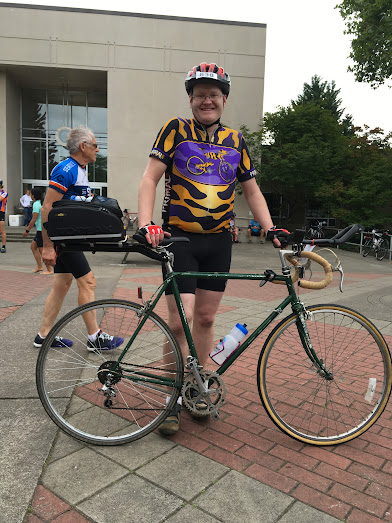 After Centralia the crowds thin out significantly; this is a problem as it's harder to find someone to draft. 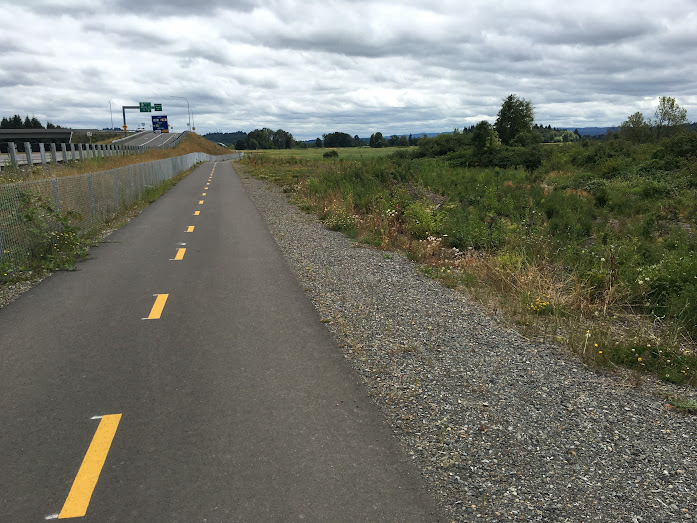 Once at Winlock you pick up your bags: 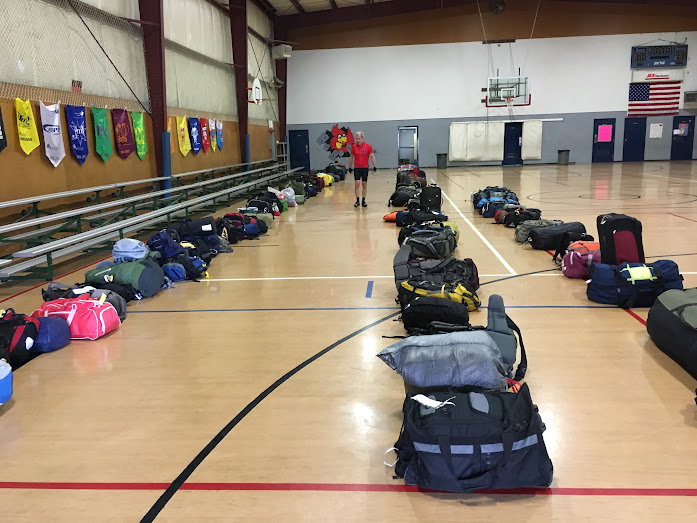 And then set up a tent, although I went with a hammock + tarp strategy: 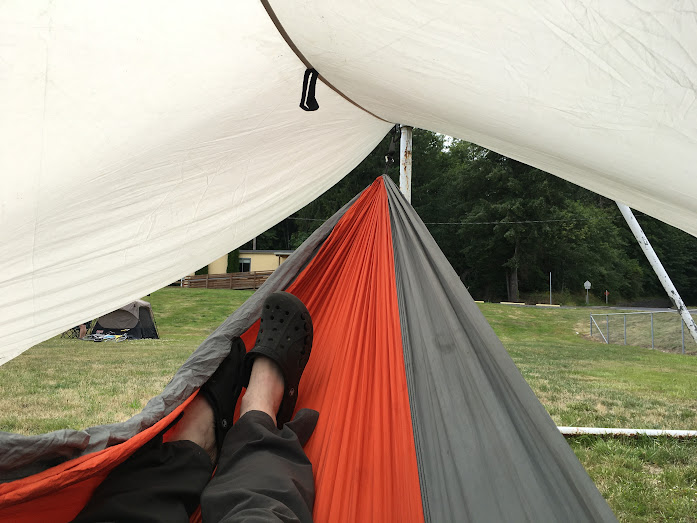 Day 2 is a bit harder than the first day. Not only is it hillier, but there are fewer riders making it harder to join a paceline: a few thousand people finished in one day, so they're not on the road on day 2. Also where on day 1 everyone started from the UW in a matter of three hours, now there are fewer people spread out all along the route from Centralia to Longview, and they're starting whenever they feel like it; I woke up at 5am and was rolling by 6am. 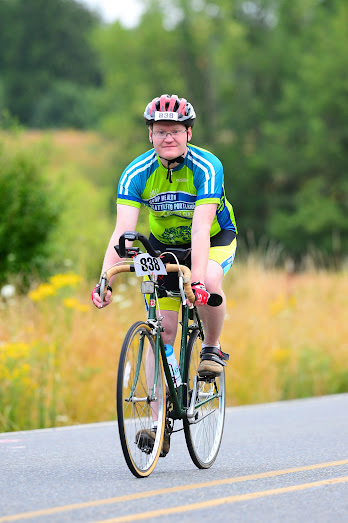 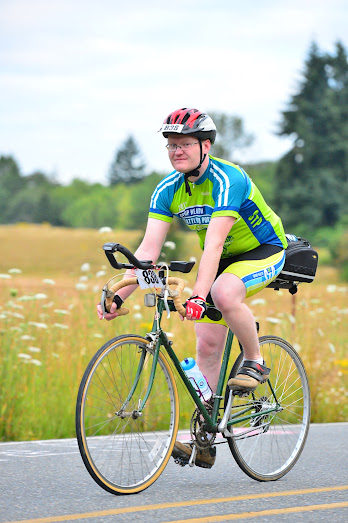 This is what a typical meal looks like at an STP food stop: 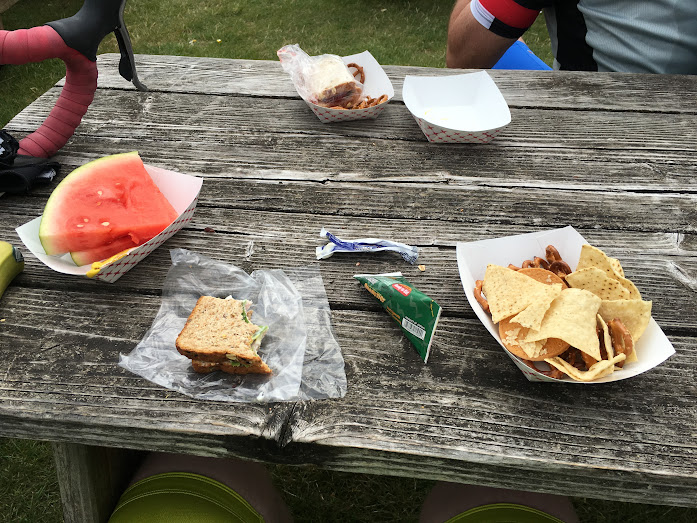 Day 2 is also less pleasant, because a lot of it is on US-30, a four lane highway with a 55 mph speed limit. It looks like this: 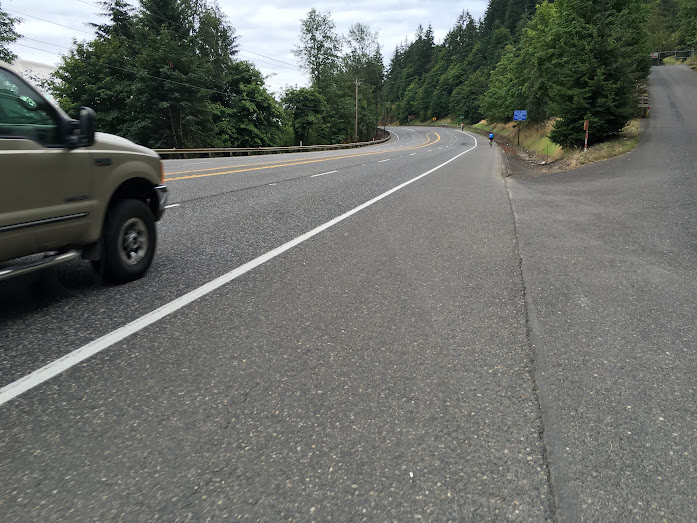 This is me crossing the St. John's Bridge into Portland proper: 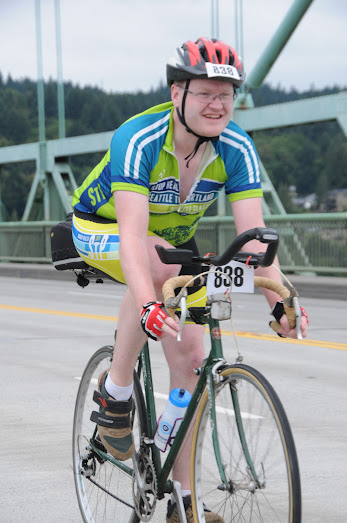 And at long last, the finish line. I arrived at 12:30pm, well ahead of the pack (largely since I biked further and started earlier than most): 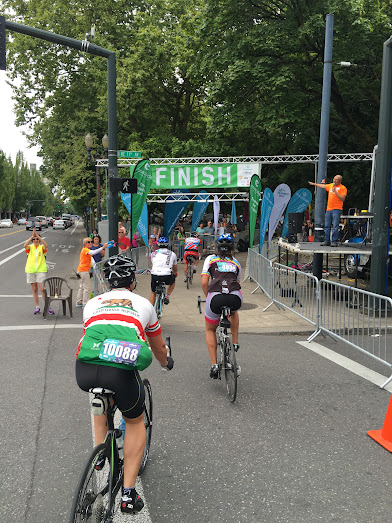 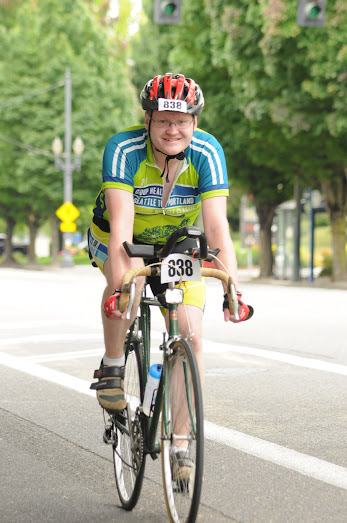 I'm putting my phone away from taking the earlier finish line photo in this one:

I had 5 hours to kill until my Amtrak back to Seattle, so I went to Powell's and to Lan Su Chinese Garden. On the way back I took a bus whose route took me on the same street that led to the STP finish: 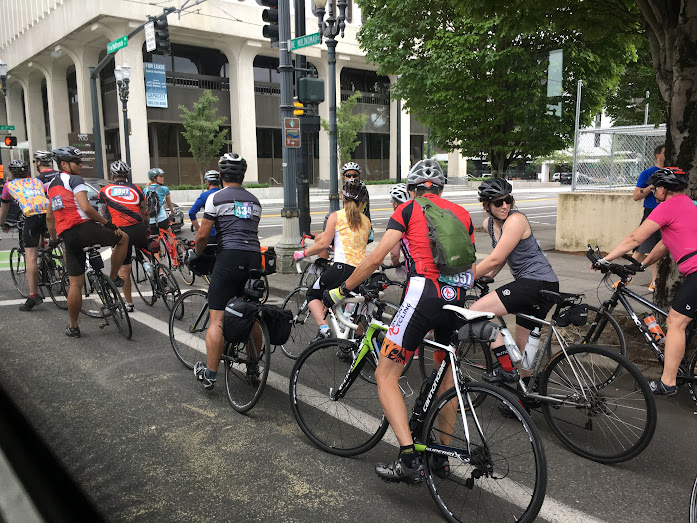 Finally, adding a fourth finisher medal to the collection: 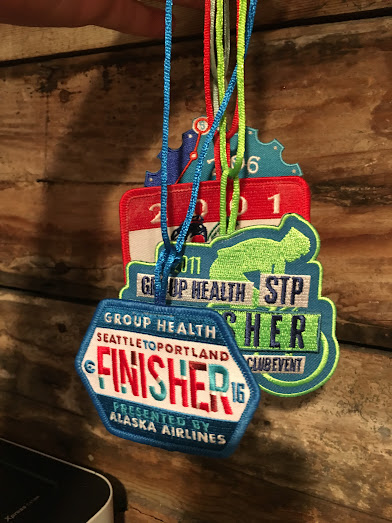