Theo had his ninth birthday. He couldn't make up his mind what he wanted to do to celebrate this year. His original plan involved Nerf guns (which he adorably calls nerve guns) and a bunch of boys shooting each other. Over the summer we talked about doing that in the park nearby, but then Theo realized with October fast approaching that the weather might not cooperate. So he decided he wanted to do a Pokemon party, Pokemon being one of his current two great loves along with Star Wars Legos. But with less than two weeks to go on the Pokemon plan, he declared that none of his friends will play Pokemon (even if they collect cards) and no one would come. While we discussed and decided that at least one friend does in fact play Pokemon (unlike in previous years, Pokemon is not the hot topic amongst schoolmates any longer apparently), Theo still didn't want to risk it. 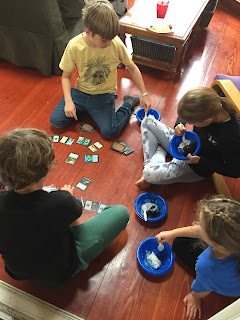 So he decided imitation is the best form of flattery and he wanted to do a Magic The Gathering (a card game even I don't understand, and that Theo has some cards but not nearly as many as Pokemon or even baseball cards) draft party. Theo attended a classmate's draft party at a gaming store last month and clearly enjoyed the experience. 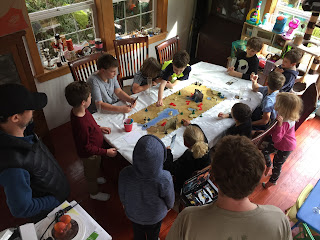 So with less than a week to go, we sent out invitations for the boys in his class (plus a few friends who have moved up to the next classroom, and a few friends outside school) to join us for a Magic party. 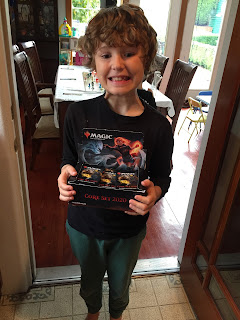 Perhaps I should've boned up on my Magic understanding but alas, having never played, and having no desire to start, I did not. We did have some fabulous decorations (potions in the five magic colors? A big banner featuring the same!) and popular food, but the game did not go as planned. It turns out when your kid asks multiple times if you have enough basic cards, you should check. In any case, the kids invaded, they played with our weapons stash (turns out we do have enough Nerf guns, swords, and who knows what else to arm ten or more boys, and now that we have a huge house, they can all run around accosting each other, too) for about half hour, settled down to attempt a draft, failed, resorted to entertaining themselves in a myriad of unfortunate ways, ate, went wild again, and finally, counting down the minutes on the adults' part, left. Big sigh of relief.

We had Subway sandwiches for the main course because Theo loves Subway. We also had Cheetos and it turns out he's not the only kid who loves Cheetos. We even fetched cucumbers last minute because we had forgotten them on the grocery run, and Theo almost single handedly devoured both of those with a generous sprinkling of salt. For his cake, he wanted an mint chocolate chip ice cream cake. Luckily, they make those, so I didn't have to craft one myself. (See also Vivian's sixth birthday, when she requested a Neapolitan ice cream cake.) 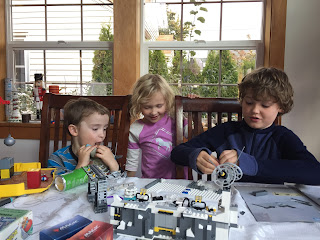 The kids who survived the party went home with some random assortments of Magic cards, and Theo scored big time in the Magic card department on gifts. He got loads of packs from friends, a deck builder set (if that's even what it's called) from Vivian, and a core box of whatever from Grandma. He also got a Magic mat, with room for not one but two players. His other main theme was Star Wars Legos, which as far as I can tell, are the only items on his Amazon wishlist. He got a small Hoth set from Grandma and Granddaddy, and a tie fighter verses a-wing (or something similar) from Babcia and Dziadzius. Then he got at least five other boxes, including a massive Hoth base set, a Hoth target shooting set, and another shooting set from Xavier. He opened all his gifts in the first 15 minutes of the day, and spent the remainder of the day, until around 3:15, constructing Legos after a nice bout of ripping open Magic card packs to see what was inside. 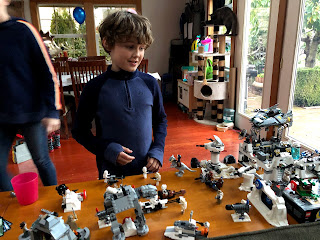 The end result is a table filled with a Lego battle set on Hoth, with a couple Endor features tossed in for good measure. Vivian and I also spotted a Lego like book light when we went out shopping, so we got that for him to read in bed without having to use a flashlight. I also learned that they make chew toys for kids, so I ordered a pack of five chew toys, three on necklaces and two pencil toppers. 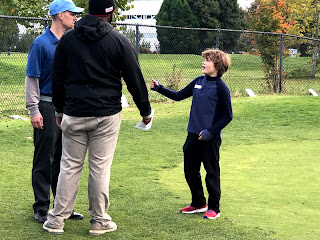 Theo had golf lessons to attend because it was Sunday, though he elected not to take any treats to share there. From there, we let him pick our dinner destination. He did not surprise us with his Mexican selection, but he wanted the local joint to reduce travel time and increase game night time. Plus, they also have a TV with NFL football, which Theo follows avidly. Sadly, they are closed on Sundays, so we went down the hill to his under duress second choice with TVS only in the bar. Luckily, it worked out, and we even got to catch the start of Sunday Night football there after a short wait. Theo ordered and polished off his standard bean and cheese burrito, although alas it did not contain rice because the kids' tortillas are too small for too much stuffing. He had not one but two sides of beans and rice to make up for it, along with loads of chips, cheese dip, and even a mango Nino margarita to wash it all down. 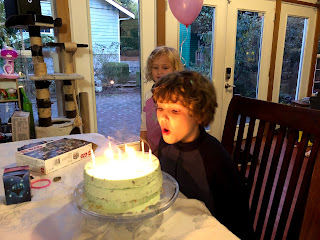 For dessert, he wanted an mint chocolate ice cream cake with no actual cake (can't blame him there). That you cannot buy, at least on only a couple hours notice, so we got two containers of mint ice cream, melted them enough to get them into layers, and Michal added toffee bits and magic shell chocolate sauce on top of the layers. By the time we returned from Mexican, we were able to assemble the layers into a cake like configuration, light some candles, and sing. Sadly, Theo hates toffee and couldn't finish his slice of cake. 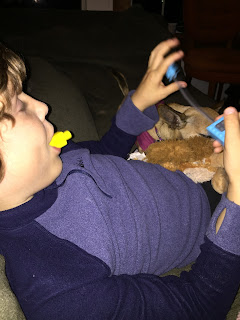 At home for game night, he choose to watch the Seahawks play, despite knowing the outcome from catching the score on the bottomline during dinner. He spent the rest of the evening watching them "destroy" the other team and enjoying every minute of it while devouring one of the new chew toys, which he only removed to talk. In less than two days, he's put some sizable dents in that silicone chew, but on the plus side, I haven't found any new shirts with dime sized holes dotting the sleeves. 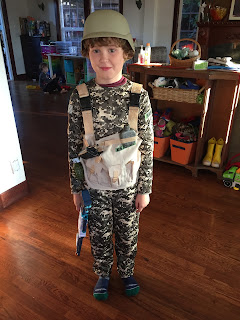 Theo's solidly into medium size clothes in the boys department, and at the beginning of the school year I removed some of the smaller stuff and added the next size up, which is large listed at 10-12. He still wears nothing but long sleeve shirts, though he will wear a t-shirt over it for a special occasion like a baseball game or cross country race. He wears size three shoes, and still has a pair of the bright yellow Croc boots that have almost become his signature footwear (and make him super easy to spot even from a distance at the park). He also has a new pair of tennis shoes in bright red and blue, after rejecting the bright red pair in his favorite New Balance brand because they had laces instead of Velcro. He loves fleecy pants, but will wear jeans and even a button up shirt for "fancy" occasions like school pictures, which is about as fancy as we get around here.

His hair still curls when its long enough, which is frequently as he will only let me cut it and we don't get to that often. He still sleeps with what's left of poor old Jez, as well as his Star Wars sheet, a big blanket he calls Fuzz Fuzz, and more stuffed animals than I care to count. When we moved, we filled up two or three kitchen trash bags with all the stuffed animals, and I didn't do a good job parring the supply down any in transition. As a result, you can barely see Theo in the piles at the top of the bunk beds. Theo needs about 9 hours of sleep a night, though he's happy to keep both his siblings up, so he still has a fairly early bedtime around 7:15/7:30 most nights to accommodate their camaraderie. He falls asleep between 8 and 9 most nights and gets up at 6:30 unless he's "overly excited" - his words, not mine. Things that can make him overly excited include impending birthdays or even a trip. 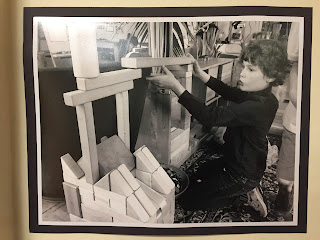 Theo loves sports and plays football, ultimate frisbee, and soccer at school regularly. He still has tons of energy and needs lots of things to do, preferably with other friends, to stay occupied. He will often cry on school days if he doesn't have a play date, or even worse, if one of his siblings does and he doesn't. 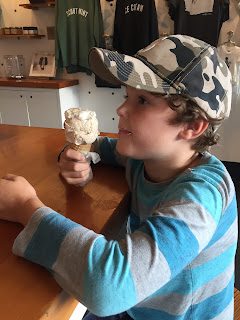 He will eat almost anything we put in front of him, except toffee apparently, and now prefers his food more like grown ups, i.e. burgers need lettuce and tomatoes and he gets really excited about things like steak. He loves soup of almost any kind, and will still pick strawberry milkshakes as his favorite flavor. He drinks milk, and can assemble his own breakfast, though if there's an adult available, he'd rather be hungry than do the work himself. He's lost a lot of interest in his pet hamster, but still loves to get Rocky out of her cage and show her off when friends and visitors show an interest. 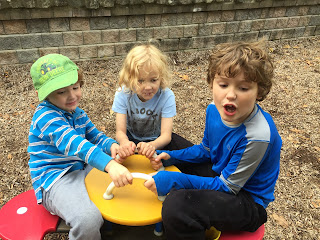 If I bothered to dig through his bed, which is rare, its strewn with legos, Pokemon cards, and books. His favorite books to date are the Star Wars visual encyclopedias. He checks out all the versions from the library, though he seems to love the aerial vehicles and space ships the best. He also loves to choose the Pokemon card guides as books for reading material in the evening before bed for us to read out loud to him. He enjoys the funny noises I make for each symbol. He's also started playing some sort of finger game with his dad, which I don't understand the gist or the rules. It involves trying to get the other person to look at a certain hand signal, and getting to slap them if they look. Very amusing if you have a Y chromosome apparently, but it gets crazy quickly. 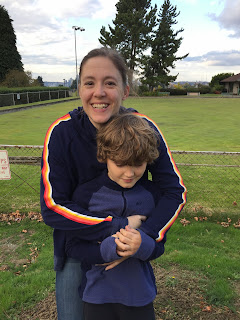 Theo weighed in at 71 pounds and 13 ounces, putting him in the 76th percentile. He's 55.5 inches tall, in he 88th percentile. which means in about 12 more inches he will be as tall as me! I knew he'd been growing with all that eating. It must be going somewhere. I finally upgraded his clothes to the large size (10-12) from the medium (8-10) in the boys department, though depending on the brand he can still fit into the mediums as well. 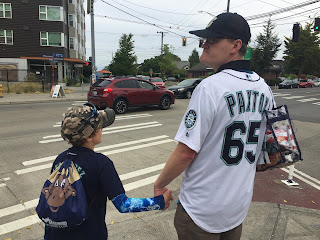 Theo has oodles of confidence and still loves his social schedule. He continues to make new friends while maintaining older friendships, and is constantly in the front of any group, as close to any authority figure as he can manage. He's made big strides in reading over the summer, and his poetry is phenomenal, especially for his age. We can't wait to see what he does next!
Posted by Sarah at 1:53 PM