Vivian ha turned seven and a half and she couldn't be more excited to be getting older. She's in second grade, and loves keeping track of the days of the month both at school (this was her classroom job for the month of October) and at home on our whiteboard for clean up. 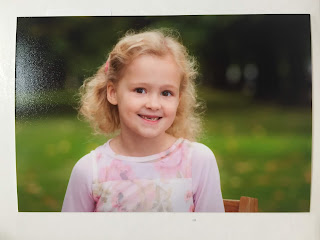 Her math skills have really taken off, as well. She's doing all the same work at her older brother, though she knows fewer shortcuts. She does multiplication by adding the numbers repeatedly, and she can always answer a questions correctly. She takes her time to calculate her answers, and often likes to do the math two different ways to make sure the numbers match before she answers. She saw an ad online for a new kids' math program while doing voluntary homework/further research on our computer about owls, the current unit of study at school. 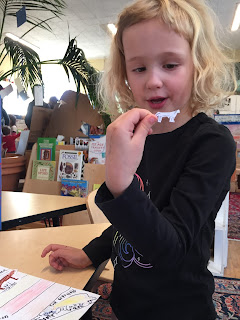 She's done the math game everyday for the full level and rarely gets things wrong. She had no idea what it meant when it asked her to round numbers, but three questions (and zero explanations) later, she could answer those questions correctly, as well. She likes devising complex math problems that Theo needs to write down to answer and enjoys stumping him. 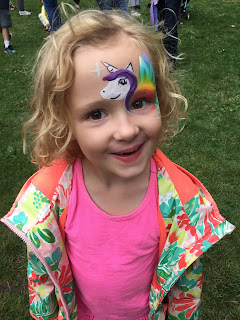 She is also rapidly outgrowing her wardrobe. Shirts and pants that used to fit are now Capri or three quarter sleeve length. She has learned if it doesn't reach her ankles, she can get rid of it, and she's so pleased to be growing so fast. We got rid of all her 3T clothes (and, shockingly, one 18 month tutu) before the big move, and she's now solidly in the girls' department in size small (6) instead of straddling the toddlers and girls' department. She wears a size 11 shoe, which is the same size as her younger brother. That worked out when I bought him new boots he didn't want, so she wears them instead. She figured out yesterday that her jeans don't pair well with those rain boots, as they won't stay tucked in and her legs get cold if they go on the outside of the boots. 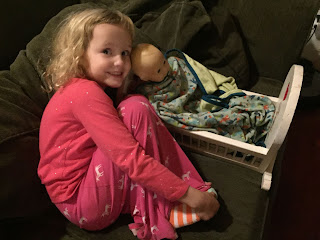 Vivian loves color, and pink in particular, but she has so many favorite colors now I couldn't begin to list them all. Quite a few include things like "shiny golden" and other colors I wouldn't normally guess. She loves clothes that sparkle and shine, and has been known to intentionally paint her gray sweatpants at school with color so they "weren't so boring." She loves new clothes, whether they come from a store or as hand me downs, and is happy to wear a wide variety of sizes even if they don't fit. 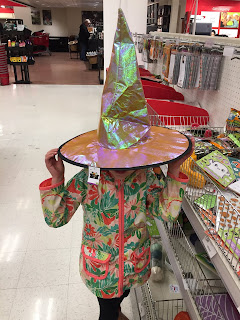 She took her newest pair of fancy shoes (hand me downs from a friend's daughter) that are two sizes too big to wear for her Santa photos. She had to wear two pairs of socks to make them stay on her feet, and she still couldn't walk the three or so blocks to the store in them, so she stowed them underneath her doll stroller, which she and her friend pushed there. 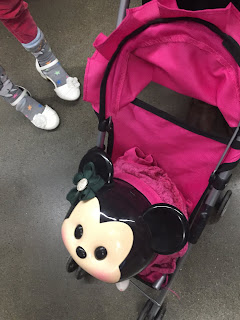 She loves dressing other things, too, like her rapidly growing Groovy girl collection (I should stop buying them but I haven't yet), baby dolls, and even things like her beloved Ryba clownfish stuffie and her hard plastic Tsum Tsum carrying case. That particular item got a pair of her old (3T) hot pink shorts and a flower ponytail holder as an ear bow and got Santa photos as well. She loves sewing new clothes for Ryba out of fabric scraps using scissors and a needle and thread for basic construction. 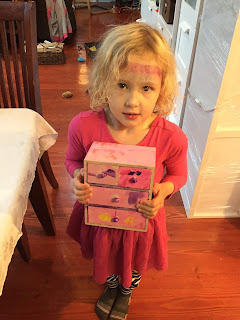 Vivian would sleep later in the morning than her older brother if she slept in her own bed. Instead, she uses the crib mattress on the floor in the boys' room, and it's rare she sleeps in her own full size canopy bed, though she loves having her own space. In the move, she lucked into a "closet", actually a wardrobe left behind by the previous owners, and loves having a space to hang up her clothes and store her things. She still misses her nook, though. She's very independent, and will often be miserable rather than ask for help from anyone. She prefers to have more time on her own, and enjoys being in her own space without other people around. She gets along with just about everyone, but maintains only a few close friendships, and she's fiercely loyal. 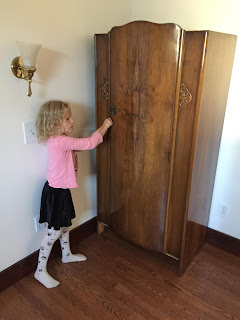 She's also very athletic. In addition to snowboarding last winter with kids three years old (and much bigger), she often gets chosen for sports team before other kids. She is extremely coordinated and very fast, so she can evade tackles and snatch balls and frisbees out of mid air. She's moved up to actual ballet classes (rather than last year's pre-ballet), and still seems to enjoy it despite the lack of songs and stickers, though mainly we are signed up because she goes with a group of girls. 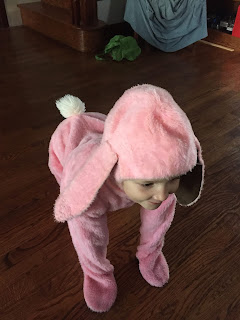 Vivian is the only child looking forward to skiing lessons this winter. She would prefer snowboarding lessons, but they seem to keep changing the minimum age. Last year we were told it was seven, and this year it is eight. We often use this as an excuse to go to Canada for skiing, as they will let kids as young as five take snowboarding lessons. 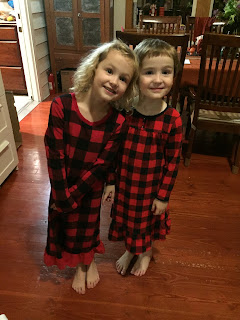 Vivian loves pasta of almost any type, though the mini cheese ravioli from Trader Joe's are her favorite. She also loves spaghetti, preferably with just butter and Parmesan cheese sprinkled in it. She would eat pasta every night if we let her, and she loves most carbs. She likes having a peanut butter and Nutella sandwich for packed lunches, and at Subway she gets a salami or pepperoni sandwich with mayo and nothing else. She loves bagels and has been known to make dinner for the entire family based on bagels, cream cheese, pepperoni, and whatever fruit or veggie we have on hand. When she gets angry, it's almost always because she needs more calories and she has very little fat content to draw on. If we can convince her to take a few bites, she turns from the grouchy gremlin back into the sweet girl we all know and love. The transformation only seems to take a good whiff of food it happens so quickly. 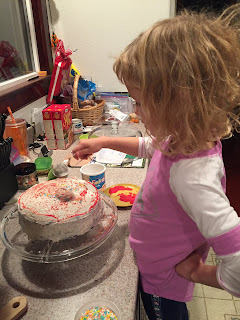 For her half birthday, we baked a cake. Vivian got to pick out both the cake and the frosting types. She choose chocolate fudge brownie cake and vanilla frosting with rainbow sprinkles. She helped bake the cake, and decorated it once it was done. 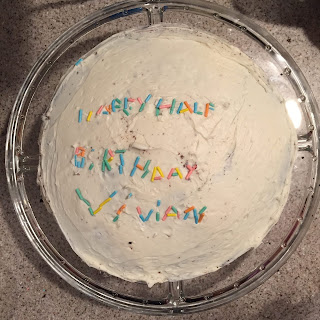 We look forward to sharing many more adventures, both in and out of school, with Vivian!