This year for Thanksgiving we travelled to see Sarah's cousin in Iowa. They live on a farm fairly far from any airport with nonstop service from Seattle, so we flew to Minneapolis and spent a few nights with Carrie's parents first, then did the 3.5 hour drive down to Iowa. Both parts of our trip were very distinct and totally awesome in their own ways. In Minneapolis we got to see snow, build an igloo (Theo calls it a "snowgloo" and Vivian calls it an "eyegloo"), go to an indoor playground and to the fantastic Mall of America. Theo would like to highlight that Theo, Vivian, and Xavier met a seven year old boy at the indoor playground. Check out the entire photo album. 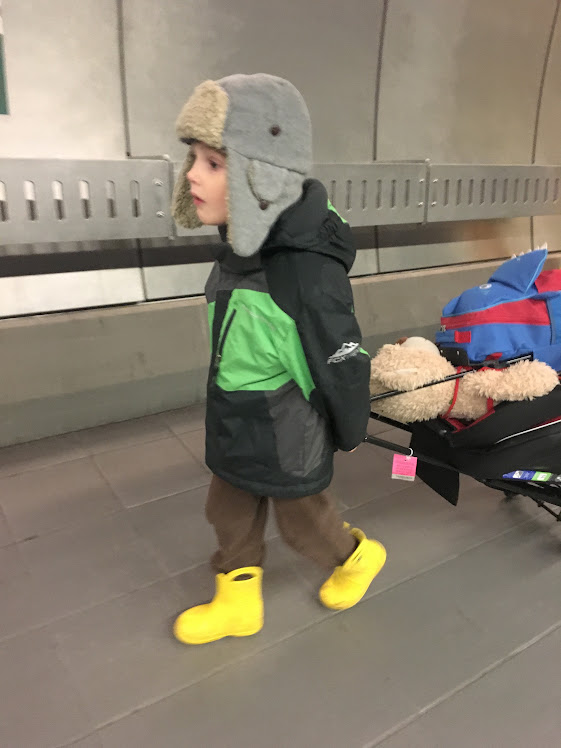 Theo was really helpful in pulling around our luggage. We had to travel with three car seats so we had a lot. 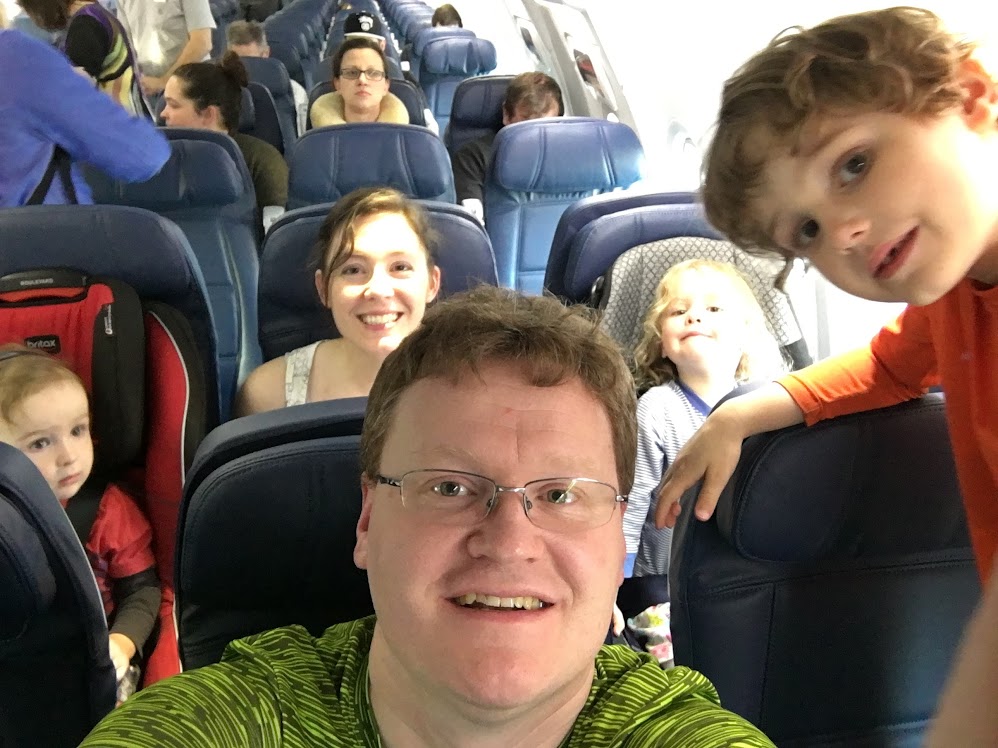 On board. This was Xavier's first flight since he's turned two, and it was Sarah's first flight in six years without an infant in arms (since airlines allow kids up to two years old to fly for free if they are on your lap, we'd never wanted to spend the money to buy him a ticket). For the airplane, Vivian is in Theo's car booster seat, Xavier is in Vivian's car seat, and Theo flew with no special seating. (The third car seat was checked luggage). 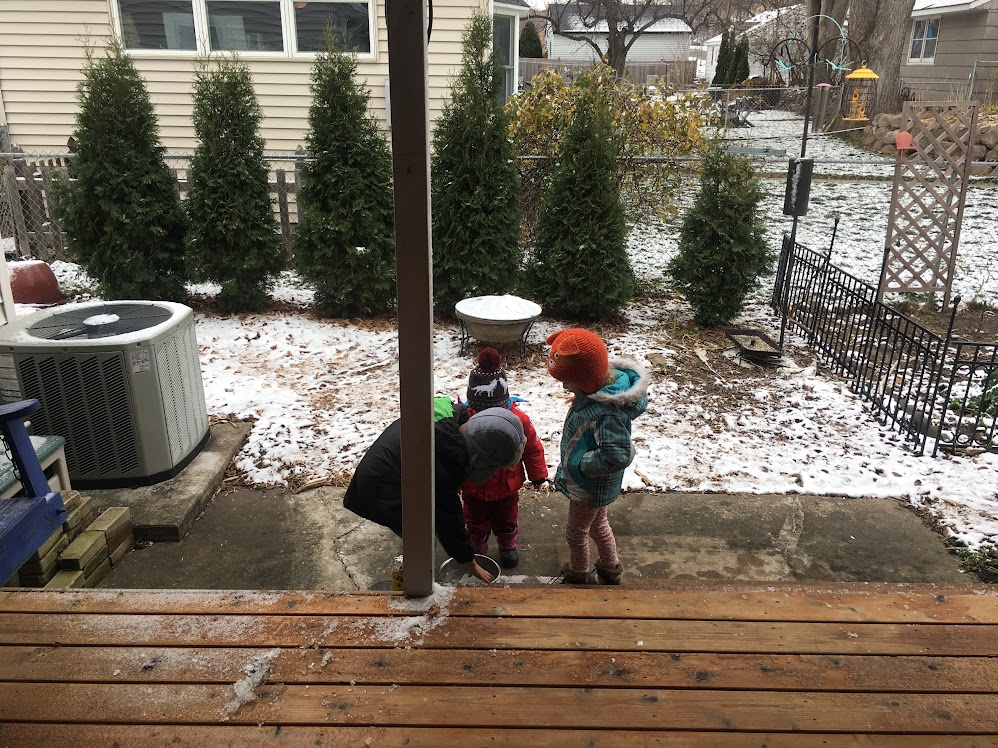 Grannie P's house in Minneapolis had a light dusting of snow from earlier. 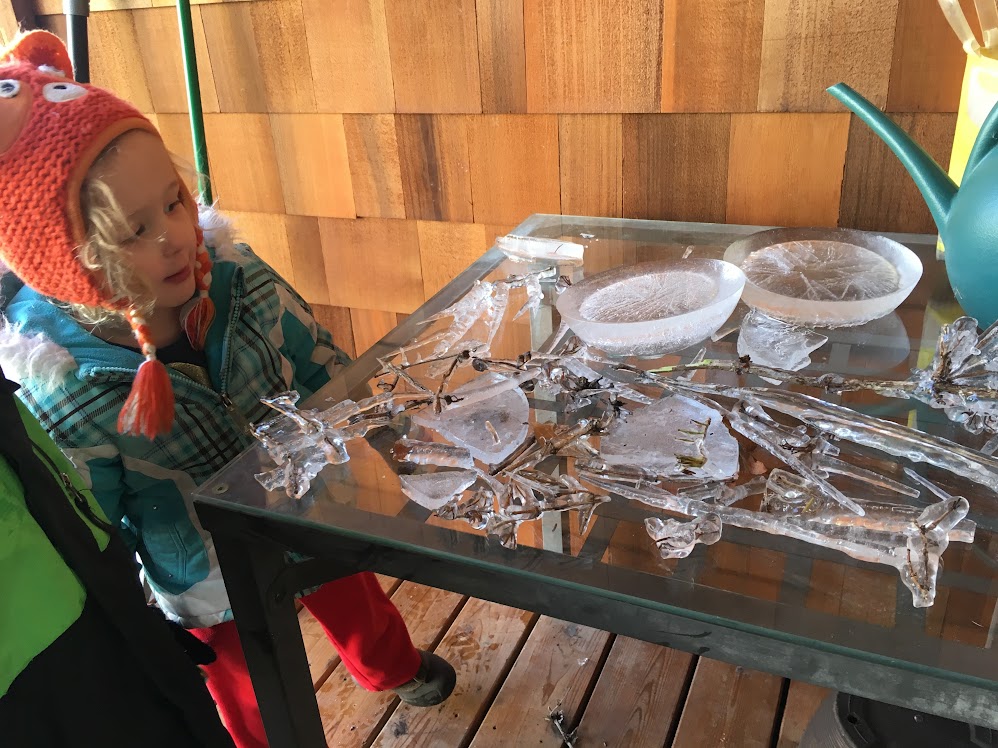 The kids ran all over the yard gathering icicles and placing them on the table. Muta, the cat, had an outdoor water bowl which would freeze up and the kids would snatch that ice too. 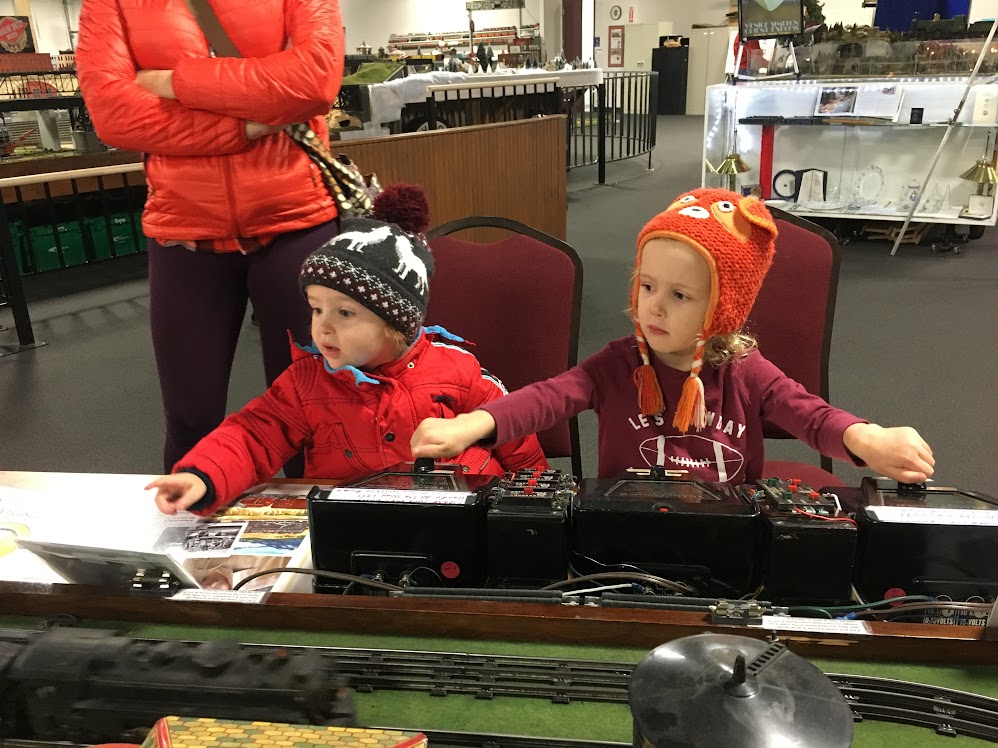 We stopped by the Twin Cities Model Railroad museum on the first day. It wasn't big but was a fun activity. 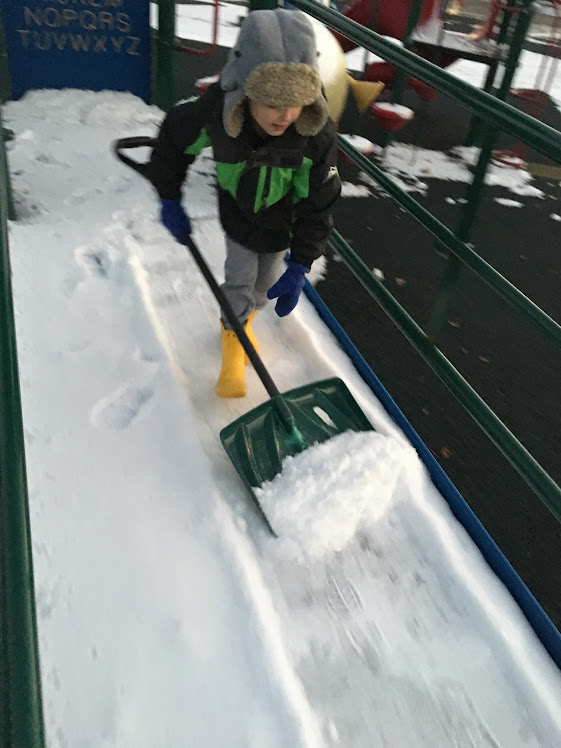 While Vivian and Xavier napped, Theo took to shoveling the neighborhood school's playground. 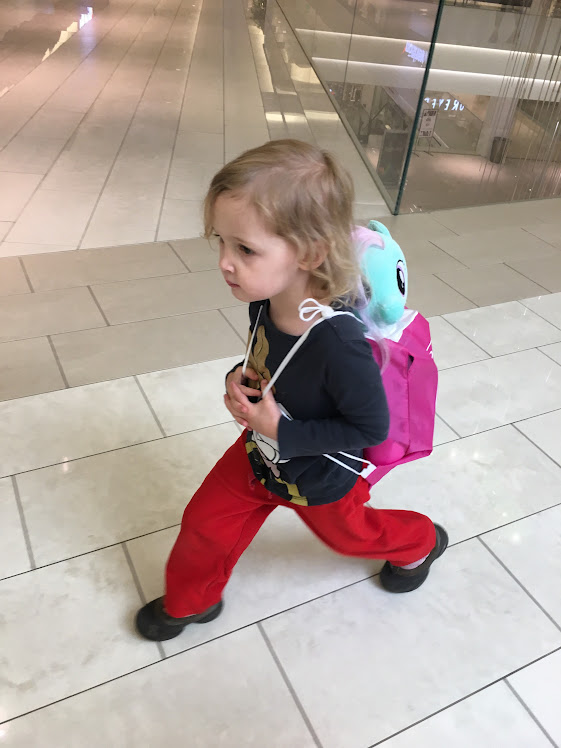 We went and played mini golf at the Mall of America. We also got Xavier and Vivian build-a-bear workshop stuffed animals (and Theo a correspondingly priced lego set). 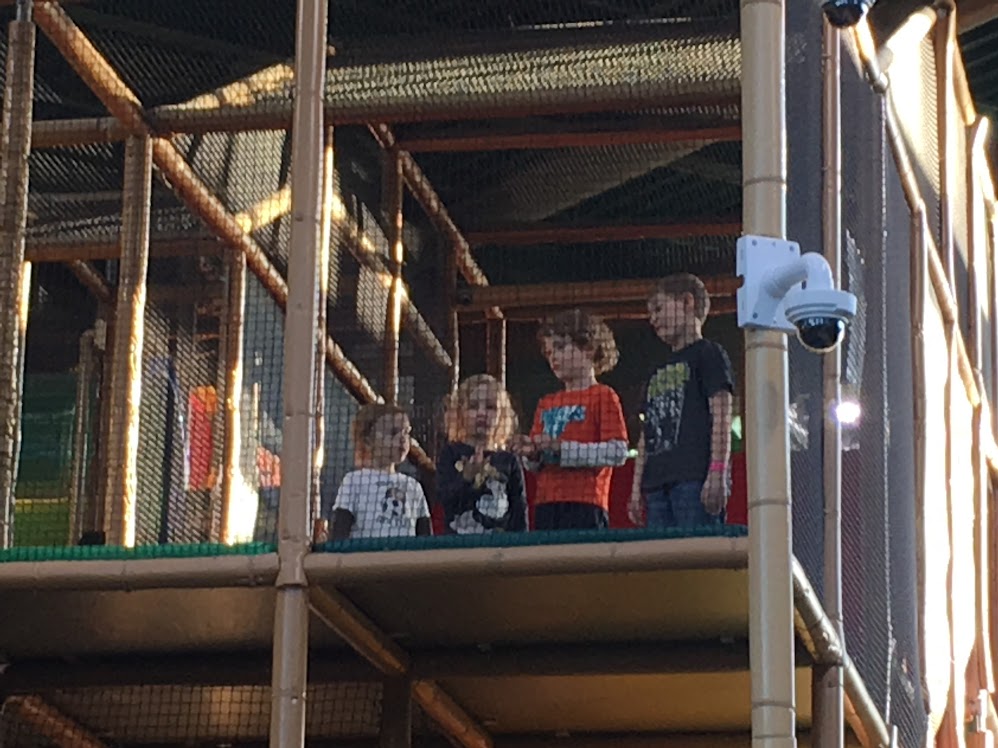 After the mall it was time to visit the indoor playground at Edinbourgh Park. The boy on the right is the aforementioned 7 year old. He showed them how to find the biggest slide.


The kids did awesome at the playground: Xavier wasn't quite big enough to climb up, and there was no way Sarah and I were going up the two or three story playground, so Theo and Vivian helped Xavier -- Vivian would pull from above while Theo pushed from below to get him over all the obstacles he couldn't manage on his own.

Next to the climbing structure there was a gym with balls and assorted riding toys. Theo used the hoola hoops to string together a train. It worked surprisingly well but the front wheel didn't have enough weight on it so it slipped a lot.

The next day, Tuesday, we went back to the Mall of America for the $12 all-you-can-ride Toddler Tuesday. Best of all, accompanying adults rode free (when required due to height minimums on the rides) 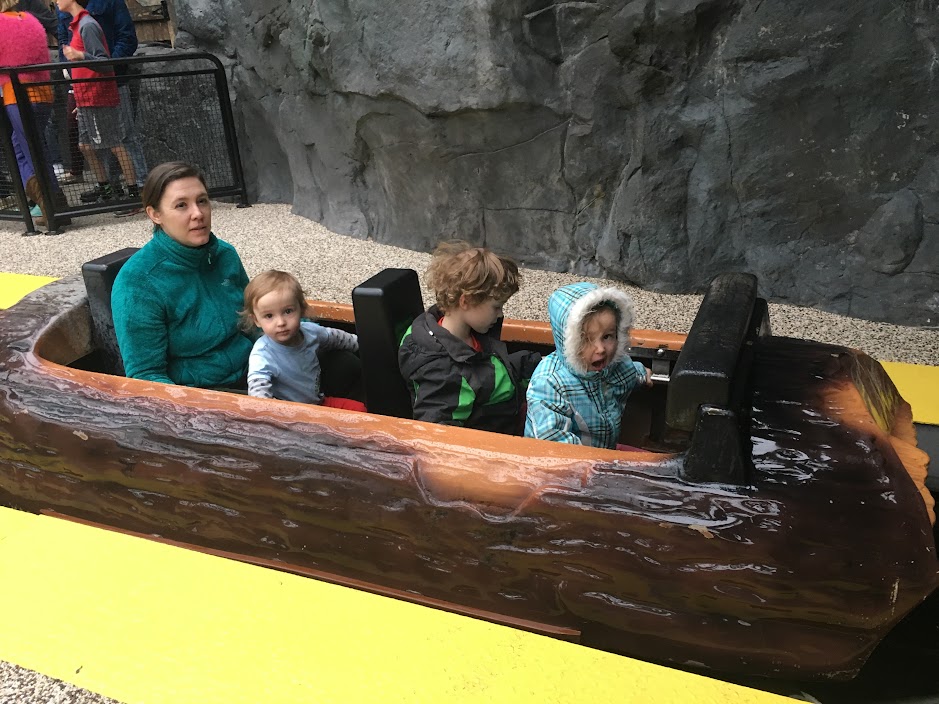 Much to my surprise and delight, the log chute was considered a toddler ride! 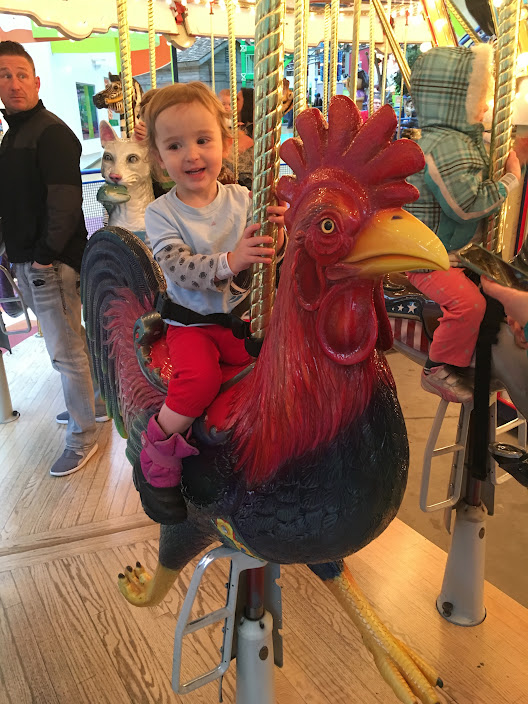 There was even a chicken on the carousel for Xavier. 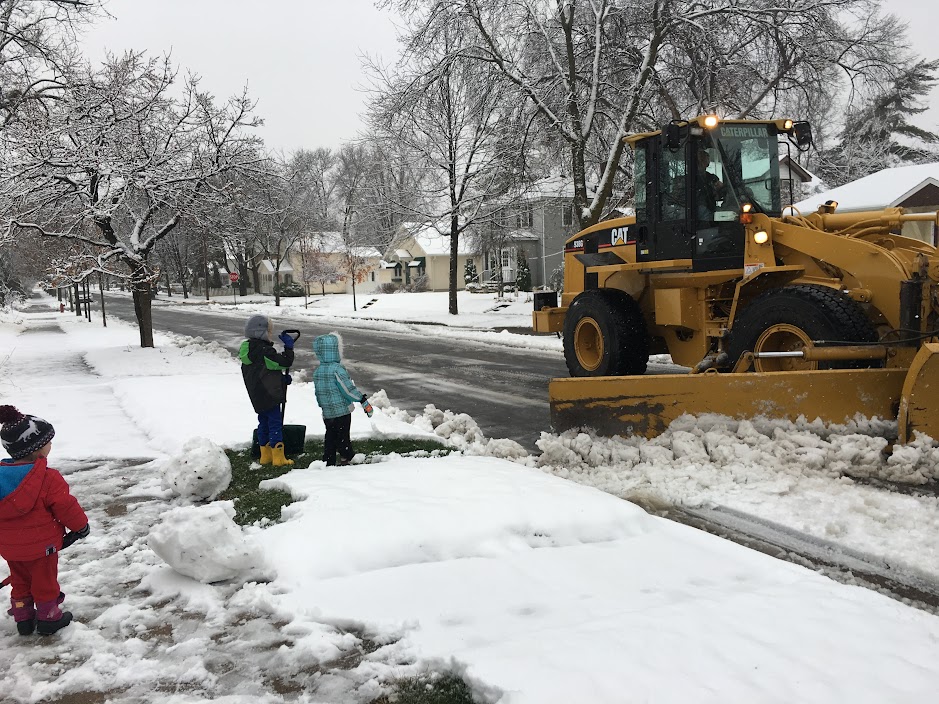 Tuesday night four inches of snow fell, so Wednesday morning we went out to build an igloo -- and found the snow plow. The driver stopped and asked if the kids wanted to drive, but they said they were too little so he said he'd come back the next year. 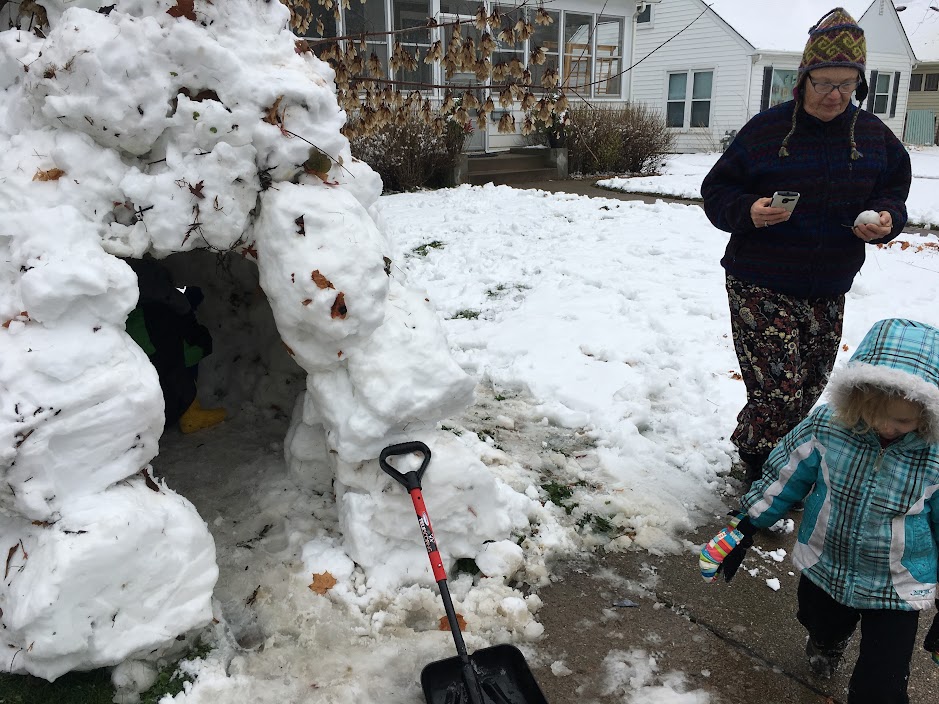 We -- and by that I mean largely myself -- managed to make a sizeable igloo. 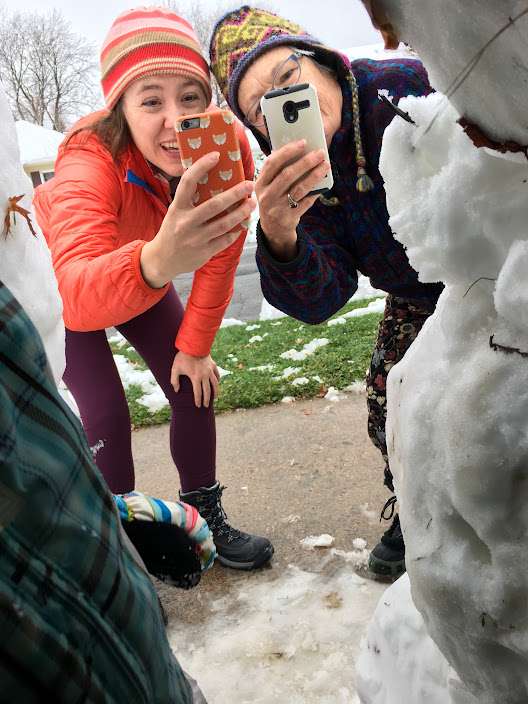 It was large enough I could fit inside with all three kids. 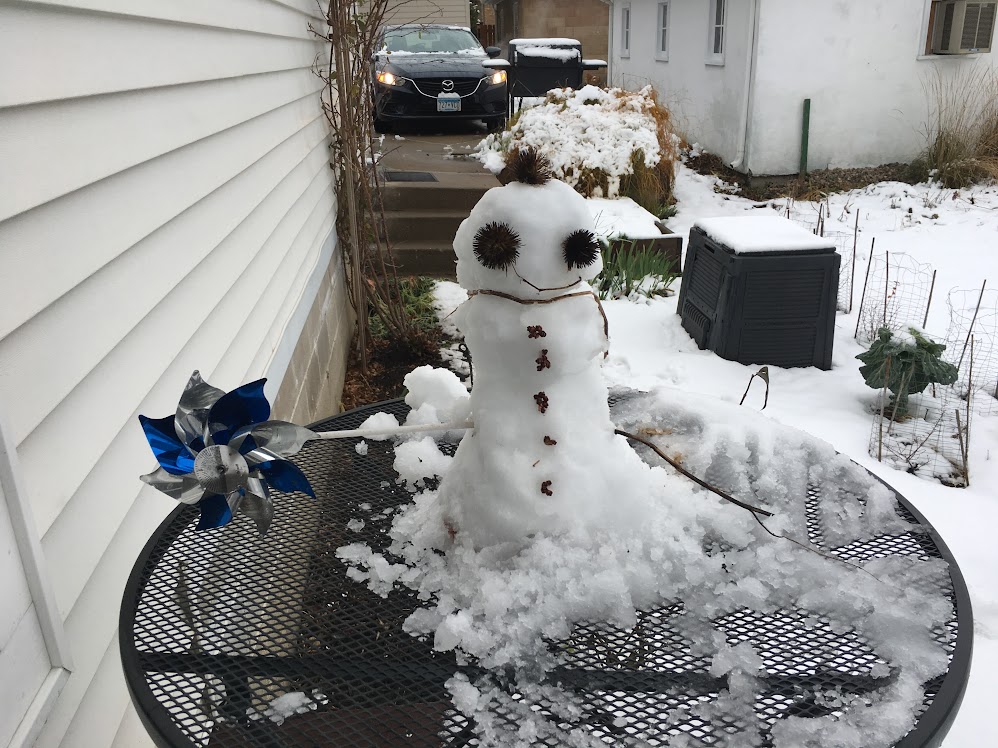 Theo and Vivian built a snowman while Xavier napped in the car and we packed it for the drive to Iowa on Wednesday afternoon.

Setting up the bed in Iowa. We had a choice of mattress or air mattress. We chose real mattress, because we were worried they would pop an air mattress. Wise decision. 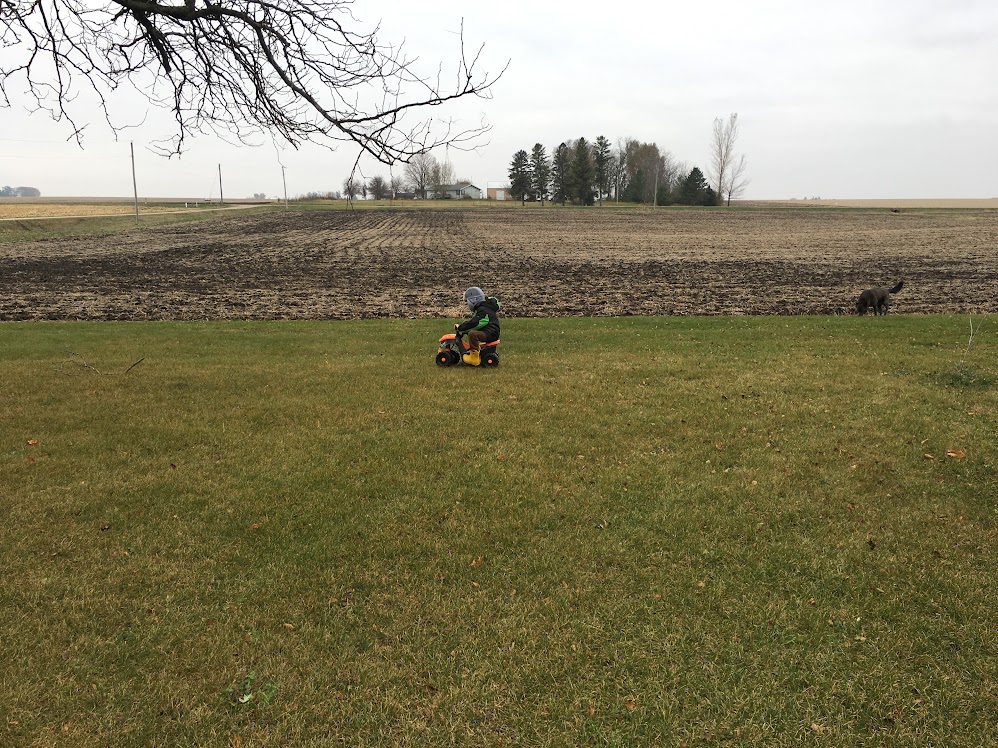 Theo exploring the lawn on a one-person power wheel. 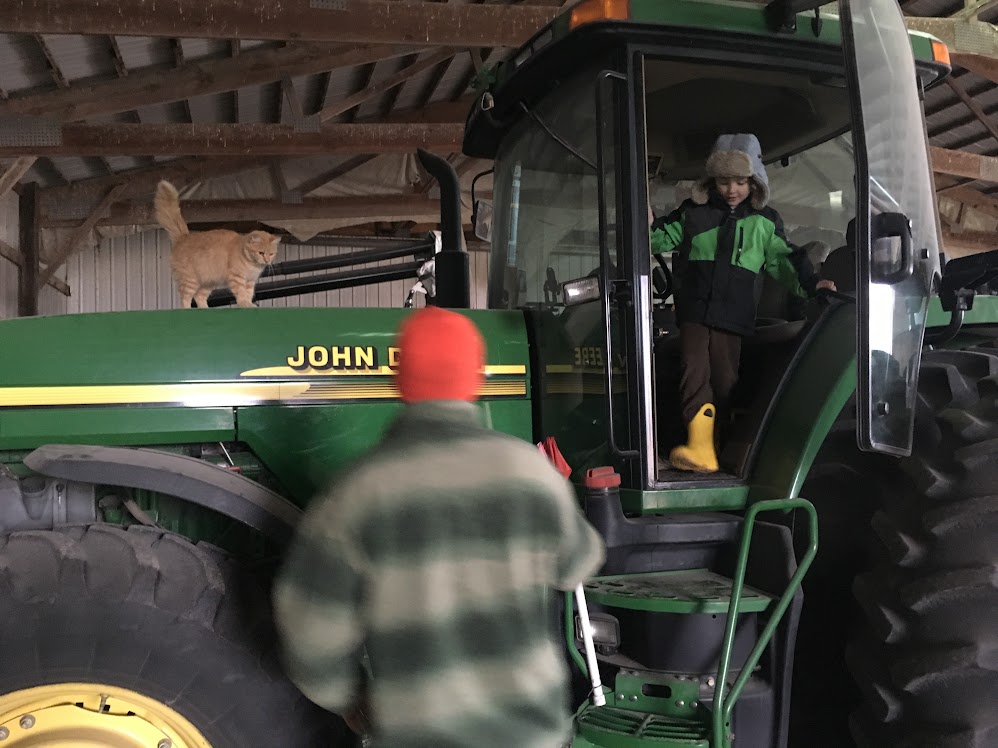 It was a real working farm, so we got to explore the tractors. 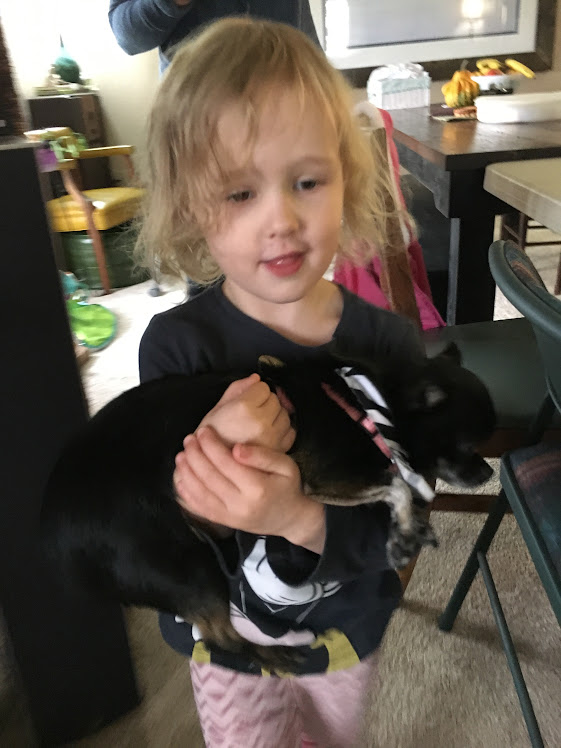 A tiny dog named little bit was carried around by the kids and renamed Little Chicken Nugget. Everyone started calling her nugget. 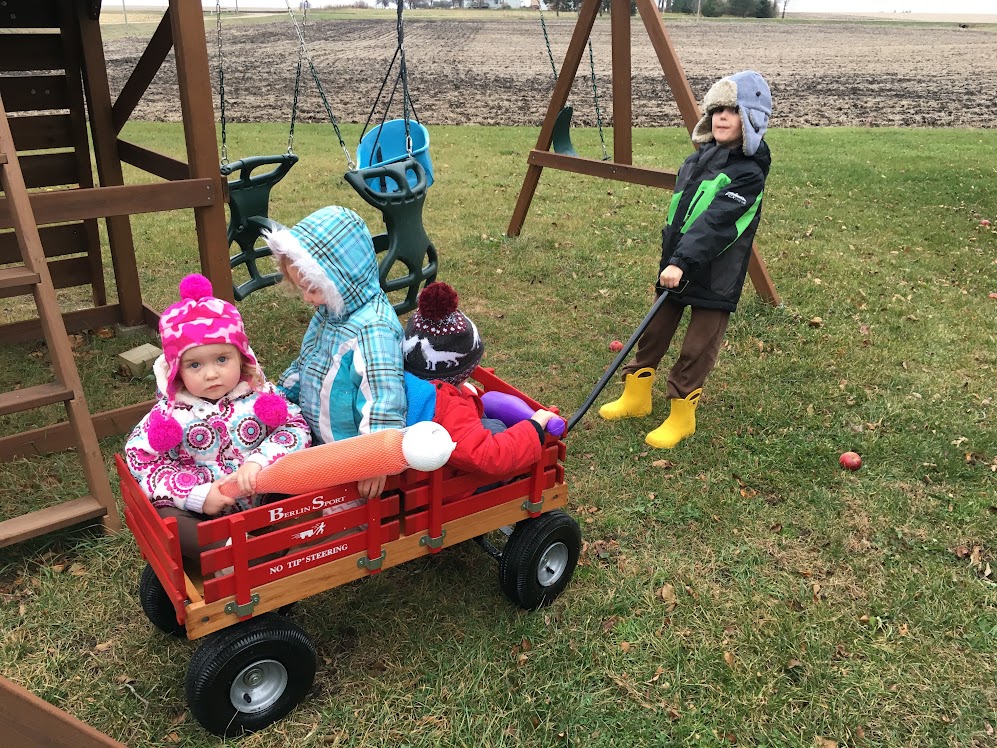 Theo pulls Piper, Vivian, and Xavier in the wagon. 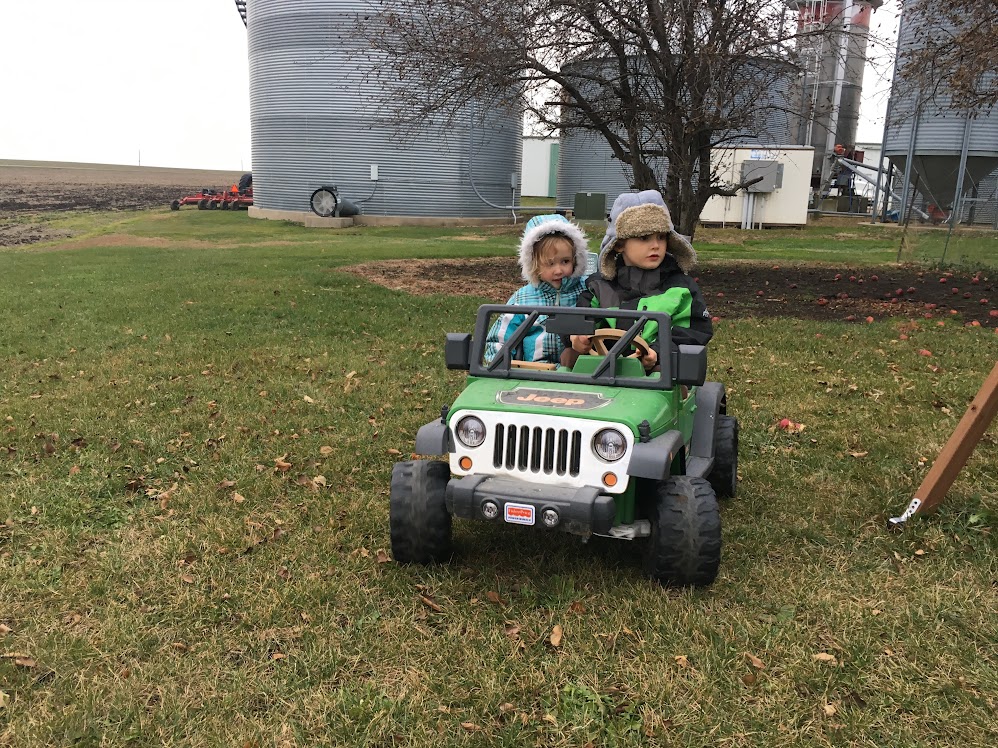 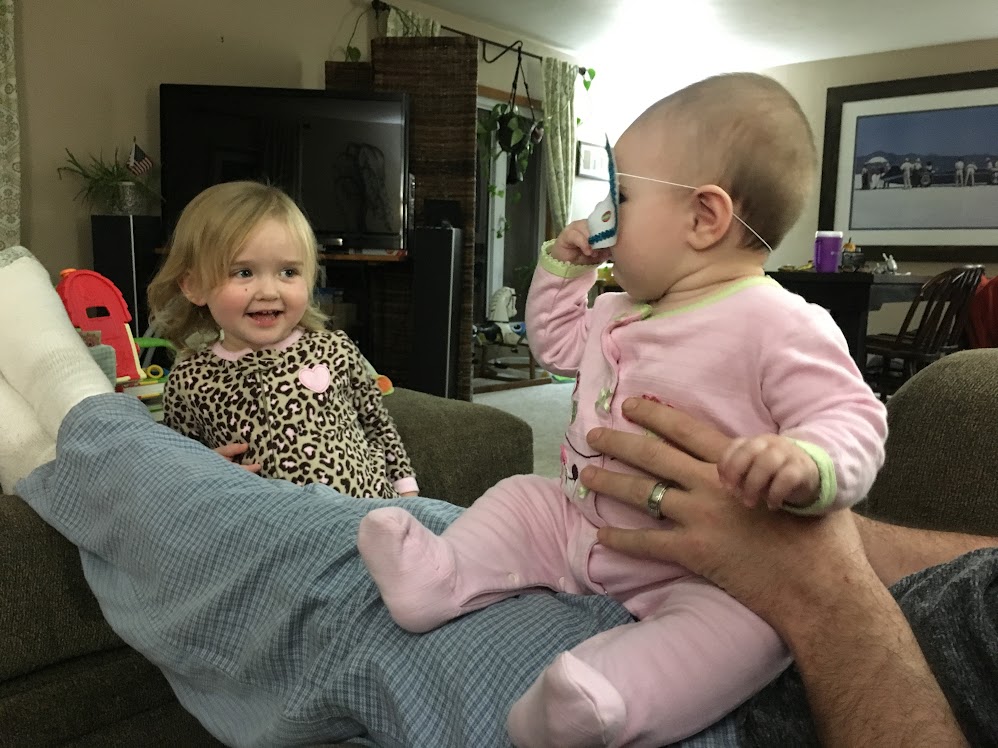 We even managed to get Ripley to wear a mask for a moment. 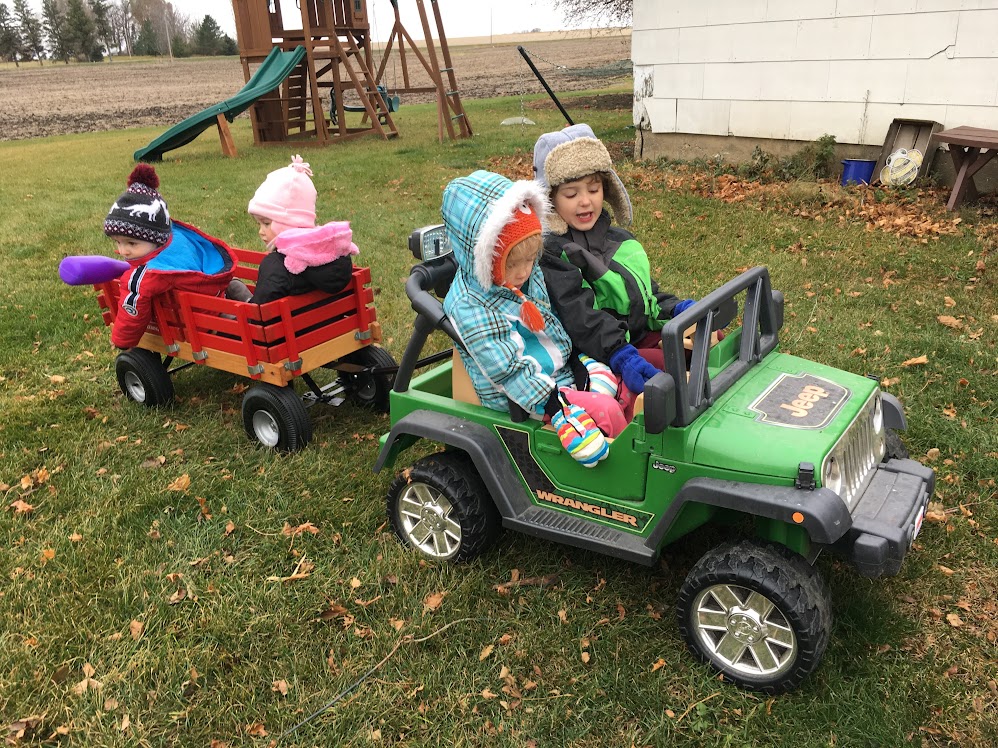 Give Theo enough time and he will try and make a train. After quite a while of riding around in the two person jeep powerwheel Theo decided to attach the wagon to it. At first nobody was available to ride in it, but Theo soon convinced everyone to come out.

Vivian got to play with a real baby! 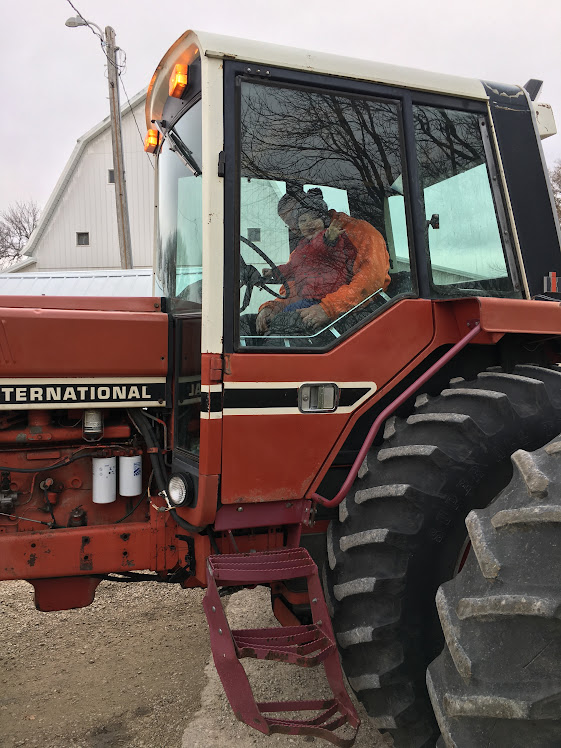 On Friday everyone got to go for a ride in the tractor, and got to steer. This is Xavier waving. 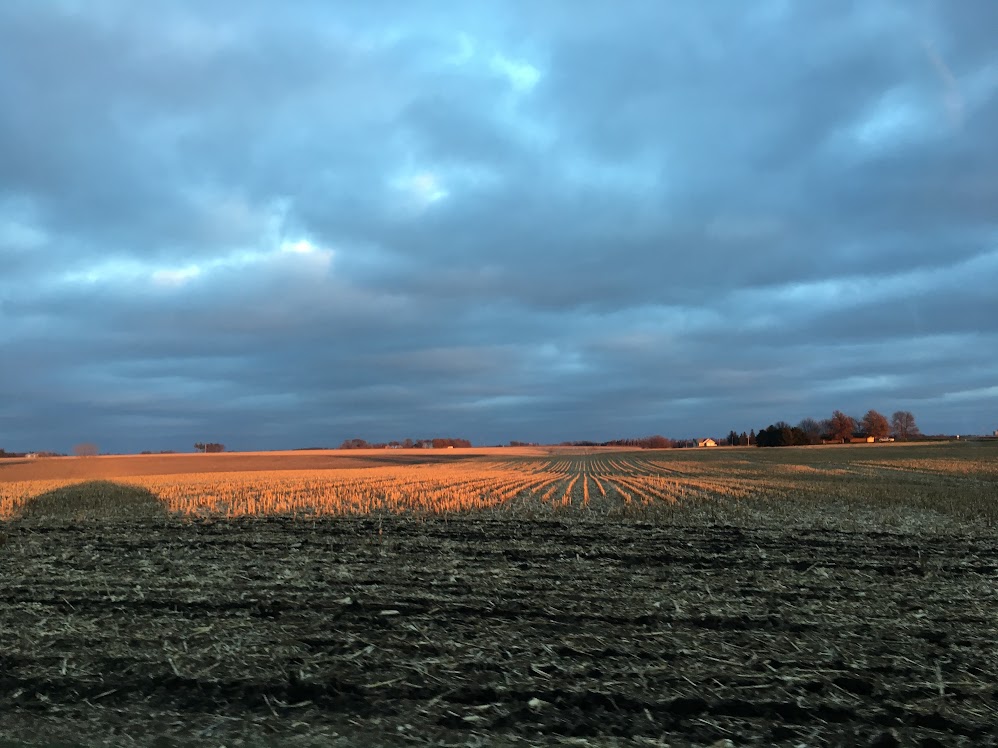 The sun came out for sunset on Friday. 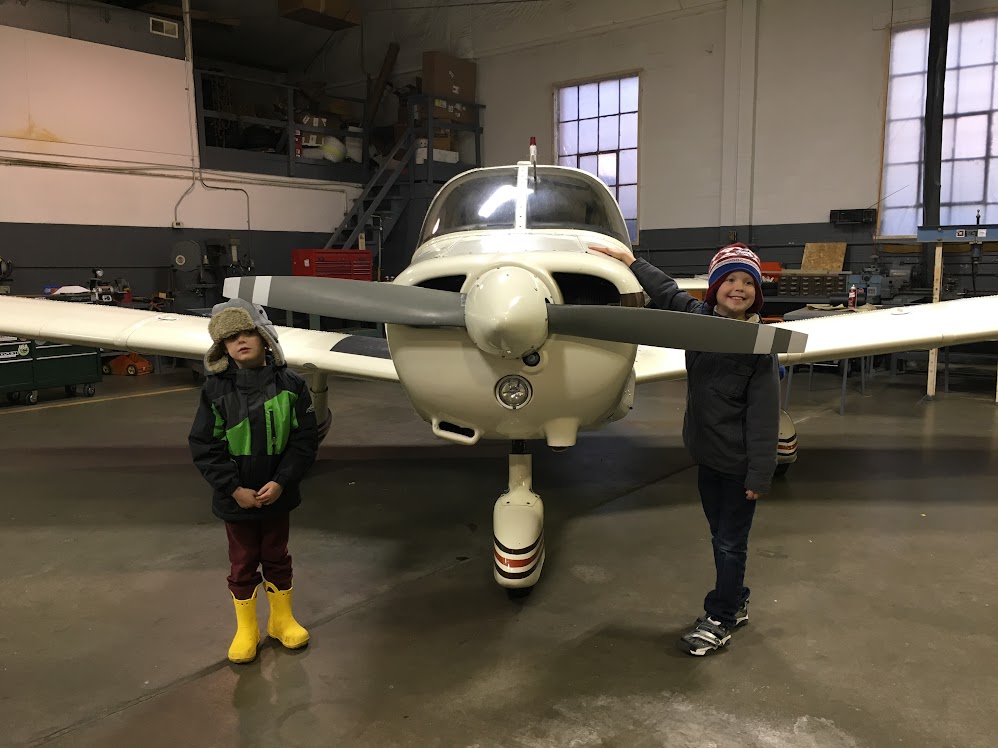 We got to check out Marshalltown Airport!

All 8 of Sarah's grandmother's great-grandchildren, together for the first time. (A 9th is on the way in March).

They all enjoy electronic devices. 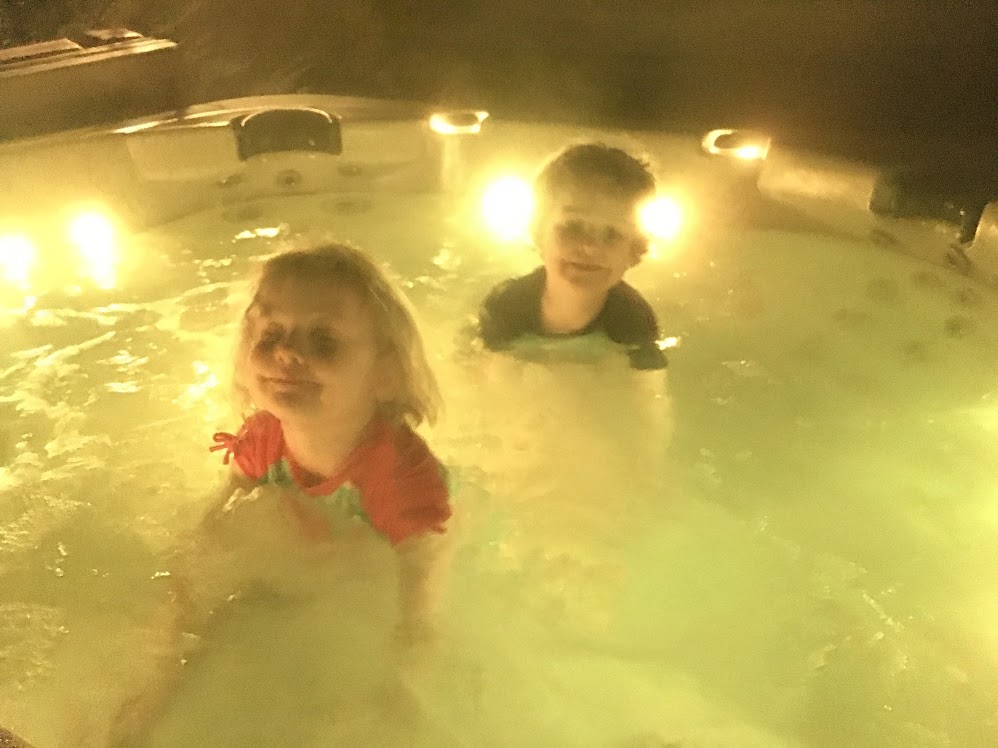 Theo and Vivian really enjoyed the hot tub too. 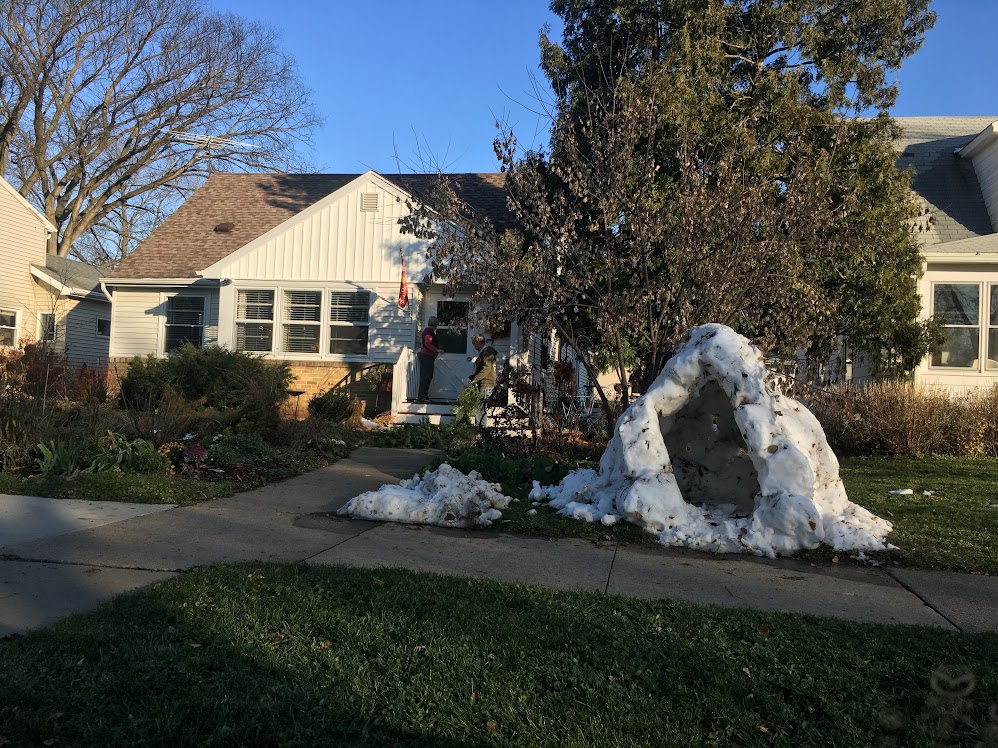 On Saturday we drove back up to Minneapolis and got something we forgot -- the igloo was still standing despite the 40 degree temperatures!
Posted by Michal at 7:37 PM