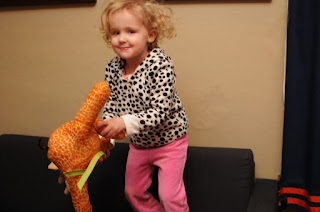 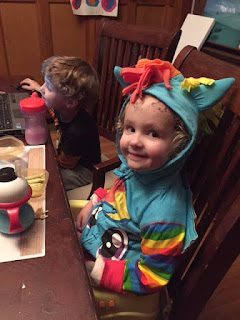 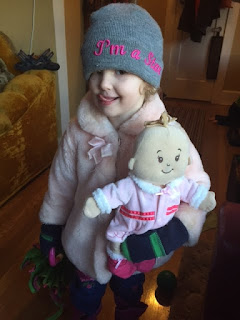 Vivian turned three and a half and we forgot to tell her for a couple of weeks. The kids have been into their half birthday marks for the last nine months or so, since Theo could claim to be four and a half. He overheard me saying that to other adults and adopted it for himself. This year marks the first time Vivian's observed her halfway mark herself, and she's very pleased. She's already making big plans for her fourth birthday. Those include inviting all her preschool friends and getting a big boy bed like Theo's.

Vivian is a hoot. She is extremely independent and once she makes up her mind, it's hard to change it.

The biggest change for Vivian - which had not happened at the official 3.5 mark but did shortly thereafter, was that she's fully potty trained. She wanted to wear underwear so much and I had a giant bag waiting for her to switch from diapers. Finally I pulled out the bag where she could see it and that seemed to be enough to push her over the edge. Plus, her teacher at school said we could send her in underwear and that helped tremendously. She's in school three days a week this year, so every other day I had to put her in diapers or a pull up to send her to school safely. Once we switched to all underwear she did great. I let her run around the house without pants a couple of days and reinstituted her potty sticker chart with purple box rewards and we were off to the races.

Vivian is in school on Mondays, Wednesdays, and Fridays from 9-2. She is still napping every afternoon though it's getting tougher only because we have to pick up her brother at 3, and that pushes nap well beyond the point where she is tired. She used to nap from 2:30-4, but now there are days where I've barely gotten her in bed by 4. That means it's often 5 or after when she gets up, and it skews bedtime later as well. Since she sharing a bedroom and her brother is an all day energizer bunny, she's getting shafted on morning sleep too. She's sleeping in her toddler bed with the small sides and green gate to close the open space between them. The gate isn't to keep her from falling out. It's to keep all her lovies and blankets and pillows in. She sleeps under five or six blankets which are described as warm, cold, or "with holes" which means hand-knitted.

After many months and one very useful teacher conference, Vivian is finally settling in at school. This is her second year there. She started the summer of 2014 and had been going ever since. Her favorite friends from last year didn't return this year, though, and that really threw her for a loop, it seems. For the first several months she would only speak to the two teachers but never a kid. She refused to take part in most group activities except snack and lunch and would even bury herself under a pile of blankets in a corner instead. She spent a lot of time sitting in a chair for refusing to clean up and she gave the teachers her full tantrums at times when she refused to have her diaper changed. She is only the second could the teacher has ever had to physically restrain because she refused to stay seated in a chair and was often closed into the bathroom (which she didn't seem to mind) because it was the only space where they could contain her.

All of which sounds very familiar. Her mother had a similar effect on preschool teachers. :-)

Vivian has an unerring fashion sense and loves to pick her own outfits. She puts together things I would never dream of combining. And it works! I don't know if her small stature helps but it's always so super fashionable and trendy. She wears leggings almost every day but sometimes adds a skirt of shorts to mix it up. She is often cold and layers tops to keep warm and adds socks and dresses to the mix as well.

She's still very much a lightweight. I think she's around 28 lbs and 37 inches tall these days. She loves shoes, pink and green are her favorite colors, and if she's not stubborn she is the sweetest most polite child I know. She's so nice to both get brothers and absolutely positively cannot get enough of her baby brother. She loves him so much. She likes to help change his diaper, pick out his clothes, feed him her food, read him books she's memorized, and give him hugs and kisses galore, especially before bedtime.

Vivian is extremely pleased that she's a big girl now and takes every opportunity to point it out. She adores swimming and fireworks, garbage trucks and diggers, and anything sparkly. She's very very good riding her balance bike now and goes faster than I can walk to keep up with her. She can bike a mile round trip most days no sweat. She's getting better on her pedal bike which has training wheels and, well, pedals. Her biggest issue is it's a very heavy bike and she doesn't have enough weight to get it moving well.

Vivian is an excellent finder and can count all the way to thirty. She knows most of her letters and almost all her numbers until 20 something by sight.

She's finally got enough hair that I put in pigtails for her for the first time today. It was so cute I couldn't handle it.

Vivian's favorite meal hands down is macaroni and cheese, preferably shells and cheese. She will horde and savor any treat, like candy or dessert. Her Halloween candy lasted until Christmas despite her brother's best efforts to help her out with her stash.

She loves her leappad and is very very good at the maze puzzle game all on her own even though the electronics are reserved for long travel trips. Her favorite shows are Bob the Builder, Calliou, Curious George, and Daniel Tiger who is by far the best.

Vivian loves her baby doll. If I had to pick one toy as her favorite (besides Ryba the clownfish who we cannot live without), it would be her baby.

I wish I had the right words to sum up her sunny sweet stubborn personality but she is an individual unto herself and words don't do her justice. Luckily she's still small enough I can pick her up or tickle her out of a recalcitrant mood, but I'm certain that won't last much longer.

For all the giraffe photos:
https://furchin.smugmug.com/Vivian-35-Years/
Posted by Sarah at 8:18 PM