Hoppy Easter from our little bunny to you! 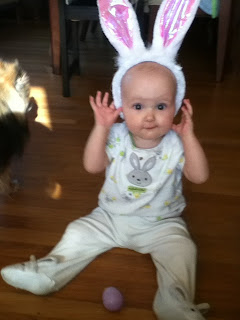 Theo scored at the local grocery store hunt. The Easter bunny made an appearance there. At first glance, the large bunny inspired Theo to be picked up and kept safe. He didn't want to have a photo taken, but was willing to high five. The high five earned him a piece of candy. From a giant Thomas bucket. They were pretty much fast friends from then on.

Vivian really enjoyed the eggs as well. We plopped her down in a pile of them (they were both in the 3 and under area so the eggs were literally just laying around) and she loved picking them up, shaking them, dumping them in her bucket, and dumping them out.

Theo loved the candy payoff inside the eggs. He did not love the second egg hunt at the community center which is overpopulated by people and underpopulated by eggs. They had no bunny there, no food, and a wait even once they got the kids outside and all the eggs were visible. By the time they actually said go, Theo was much too overcome by the crowd and jostling among the 3 and under group to even run much less pick up eggs. He scored none there. Vivian got three - one that Daddy picked up to show Theo how it was done (Theo wouldn't even let him put it in his bucket), one that I literally sat her on top off at the far edge of the hunting grounds, and one that was a few inches away that I rolled to her once I realized Theo probably had none and there was going to be a sibling issue.

On Sunday we went for a hike in the gorgeous weather in a large local park near my old house across town. We just happened to catch a far off glimpse of the Easter bunny frolicking in a green meadow. He (or she) was actually hopping around and Theo is still talking about seeing two Easter bunnies, one hopping. That one came after Easter baskets were discovered which probably also contributed to his goodwill. It was also a very safe distance away.

All in all, a great Easter for everyone and particularly pleasant for Vivian's first experience. See more photos from Saturday and Sunday's adventures.
Posted by Sarah at 3:14 PM