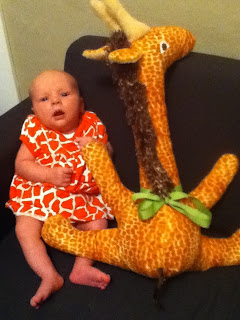 Vivian is one month old today! You've heard it before but I will say it again - my how time flies! We have no real idea how big she is - well over 8 ponds I assume. How much over I don't know. She did so well at her two week doctor's visit that she doesn't go back until two months. She should have been weighed at the midwife's yesterday but our appointment was rescheduled due to another birth.

At one month Vivian is mellow about everything external. Theo wailing next to her ear? Nada. The dog barking incessantly? Not even worth a flinch. Construction, including jack hammering and air compressors in the house? No reaction whatsoever. Vivian is so ionize to these things we worried whether she could hear at all. She passed her hearing screening with flying colors. Apparently it's just her personality.

Eating, on the other hand, is cause for nonstop screaming. Miss her hunger cues by only a few minutes and pay the price. She can get so riled up about eating (or rather not eating) that she can't calm down enough to eat. Burps and the occasional poop also have thus effect. And she gulps so rapidly when guzzling milk like there's no tomorrow that she burps a lot.

Vivian still sleeps with me which is lovely for both of us. On a normal night she doesn't even cry. She wiggles, she gets fed, and we both go back to sleep almost instantaneously. She eats every hour to two hours during the day. More than two hours is rare. Most nights she goes three hours on a full feeding from both sides. Often I am too lazy to roll over and she snacks more frequently from one side at a time.

I have no idea how often she sleeps during the day. I have just started swaddling her, as previously it wasn't required to achieve calm baby status or keep her warm this time of year. She also hates having her hands constrained, as evidenced by the fact that she was born with her right hand in her face. That preference has not changed. She likes to use a breast as a pillow even if she's not eating, and stuff her face into warm confined places to sleep. She seems to prefer her left side and her favorite is face down on someone's chest.

We will know more about her sleep patterns soon as she is enrolled in a sleep study starting tomorrow.

Her hair is starting to fall out. The top of her head is almost bald, but the rest of her hair is long enough to get bed head. Her fingernails remain frighteningly sharp and quick to grow.

She loves the sling, tolerates the swing and bouncy seat and puts up with the car seat as long as it isn't time to eat.

Overall Vivian is interested in the world but not concerned about it. We look forward to watching her continue to grow and develop.

A brief preview of photos to come once they are uploaded. This giraffe photo was taken today.
Posted by Sarah at 10:24 PM